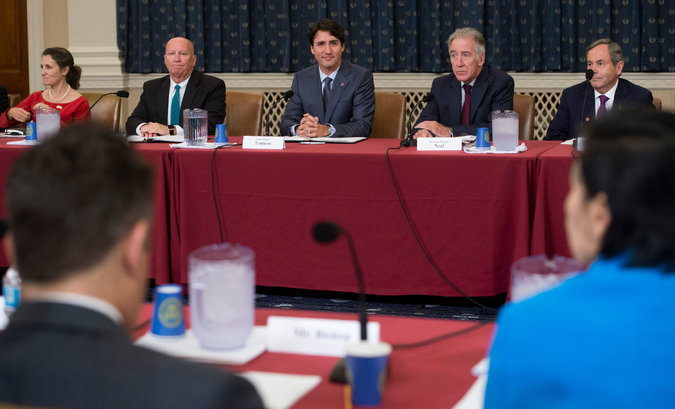 This article was originally published by the New York Times–

the United States, was edging closer toward collapse as negotiators gathered for a fourth round of contentious talks here this week.

In recent weeks, the Trump administration has sparred with American businesses that support Nafta and has pushed for significant changes that negotiators from Mexico and Canada say are nonstarters. All the while, the president has continued threatening to withdraw the United States from the trade agreement, which he has maligned as the worst in history.

As the trade talks began on Wednesday, Mr. Trump, seated in the Oval Office beside Prime Minister Justin Trudeau of Canada, said it was “possible” that the United States would drop out of Nafta.

“It’s possible we won’t be able to make a deal, and it’s possible that we will,” the president said. “We’ll see if we can do the kind of changes that we need. We have to protect our workers. And in all fairness, the prime minister wants to protect Canada and his people also. So we’ll see what happens with Nafta, but I’ve been opposed to Nafta for a long time, in terms of the fairness of Nafta.”

Mr. Trudeau, in comments later at the Canadian Embassy, said he remains optimistic about the potential for a Nafta deal but noted that Canadians must be “ready for anything.”

The collapse of the 1994 trade deal would reverberate throughout the global economy, inflicting damage far beyond Mexico, Canada and the United States and affecting industries as varied as manufacturing, agriculture and energy. It would also sow at least short-term chaos for businesses like the auto industry that have arranged their North American supply chains around the deal’s terms.

The ripple effects could also impede other aspects of the president’s agenda, for example, by solidifying political opposition among farm state Republicans who support the pact and jeopardizing legislative priorities like tax reform. And it could have far-reaching political effects, including the Mexican general election in July 2018 and Mr. Trump’s own re-election campaign.