Biden could reduce inflation, mitigate a recession, and strengthen democracy with a new EU-US trade agreement

On both sides of the Atlantic, economies are showing signs of turmoil: Inflation is at the highest level in more than 40 years, the U.S. stock market has plunged significantly since its peak on January 3, and expectations for a recession are increasing both in the EU and in the U.S., particularly as the Federal Reserve and the European Central Bank are aggressively increasing interest rates to combat inflation. At the same time, the Russian war against Ukraine—with implicit support from China—has underlined the importance of the transatlantic partnership as a democratic bulwark against brutal authoritarian regimes and as a pillar of stability in the world. Policymakers looking for solutions to combat rapidly rising prices—fueled by a mix of supply chain bottlenecks (leading to a shortage of certain goods), rising energy prices, and heightened consumer demand—have largely turned to traditional monetary policy by raising interest rates, risking recession.

However, unfortunately, neither policymakers in the U.S. nor in the EU have so far publicly considered an additional policy measure which could solve several problems at once: to revive and complete an EU-U.S. free trade agreement, building on the Obama administration’s efforts to establish the Transatlantic Trade and Investment Partnership (TTIP). A TTIP successor would not only have the potential to significantly ease existing supply chain woes and reduce inflation in the medium-term but also increase economic growth on both sides of the Atlantic, thereby reducing the risk of a prolonged recession in the U.S. and the EU. While reviving an EU-U.S. free trade agreement will take some time, central bankers now expect that inflation pressures might last longer than expected and that we might not be returning to the low-inflation environment we faced before the pandemic. This underscores the importance of finding other policy measures that curb inflation but do not reduce economic growth. Moreover, an EU-U.S. free trade agreement would lead to greater integration between these two vital blocs, deepening economic and political ties in line with the existing close military ties, increasing regulatory harmonization, and building a more coherent counterweight to the increasingly assertive authoritarian alliance between Russia and China. Reviving a TTIP successor could help improve the economy, reduce inflation, and strengthen ties with our democratic allies.

President Biden would have a good basis to restart negotiations with the EU by building on the far-reaching efforts to implement TTIP by the Obama administration. Before the Trump administration scuttled TTIP and antagonized the EU by imposing tariffs on European goods, President Obama had made significant progress in negotiating an EU-U.S. free trade agreement after launching talks in 2013. The U.S. could pick up where it left off in 2016 by adopting the provisions settled by the initial 15 rounds of negotiations and renewing these talks.

TTIP would have effectively eliminated 98-100% of tariffs, reduced non-tariff barriers to trade with Europe by 10-25%, and been the largest trade deal in history (see Appendix Table 1 for an overview of tariff reductions). Based on estimates of the impact of TTIP on the U.S. economy, wages for high- and low-skilled U.S. workers would have increased, U.S. exports would have spiked, and millions of American jobs would have been created. The deal would have also spurred broad economic growth by increasing U.S. GDP an estimated 0.2-0.4%, or about $75 billion annually.[1] For the EU, TTIP would have increased GDP by 0.3-0.5%, or about $64 billion annually.[2]

Importantly, an often-overlooked benefit of free trade agreements is that they can ease inflationary pressures by streamlining trade between nations, thus increasing the supply of goods and reducing prices. That is, rather than curb demand as interest rate increases do, free trade works through the supply side. Because the current inflation spike can at least partly be attributed to stresses on supply chains, a free trade agreement inducing greater supply would be one step to help ameliorate the magnitude of inflation. By bolstering supply chains, a new free trade agreement would also help relieve shortages of certain goods that have persisted since the pandemic, such as the recent baby formula shortage, and ensure greater access to essential products.

THE EXPECTED BENEFITS OF AN EU-U.S. FREE TRADE AGREEMENT

The economics behind free trade is clear: Liberalizing trade between two economies increases competition by expanding market access to firms and encouraging firm entry. The lower barriers to entry and resultant increase in competition drives down prices for the consumer and helps to mitigate market concentration. This core argument has been proved by numerous empirical research studies in the past few decades.

While the U.S. does have “most favored nation” status with the EU, American exporters still faced an average 5.2% tariff to the EU in 2018. This was even higher for agricultural products at 12%. Many U.S. industries that ship non-agricultural products could benefit from a free trade agreement as well, including fish and seafood, which incur up to a 26% EU tariff, trucks at 22%, and passenger vehicles and processed wood products, each at 10%.

In addition to these broad economic effects, the American worker would have benefitted, too. TTIP would have likely raised wages for low-skilled American workers by 0.4% and for high-skilled American workers by 0.3% (however, these increases in wages would not lead to more expensive goods, since prices would be offset by higher competition and the direct impact of lowering tariffs). Unlike other countries with which the U.S. has free trade agreements, such as Mexico and Colombia, the EU is a high-wage economy. This means American workers would not be directly competing with foreign low-wage workers, alleviating concerns about downward pressure on wages in certain sectors.

To see which industries stand to benefit most from trade economists generally look at trade elasticity, which measures the proportionate increase in demand after a reduction in trade costs allows the price of a good to decrease. Sectors with higher trade elasticities see higher demand for their products as barriers to trade are reduced. Figure 1 shows trade elasticity by sector.[3]

An economic report co-authored by the Atlantic Council estimated that TTIP would have added over 740,000 jobs to the U.S. economy in total, while a Munich-based think tank estimated that 400,000 jobs would have been created in Europe. Analysis of TTIP shows that the motor vehicle, machinery, furniture, computer and electronics, textiles, and food sectors were among those poised to benefit most from the deal, partly due to their trade elasticities and partly due to the types of goods that comprise EU-U.S. trade. Specifically, one German think tank estimated that TTIP would increase U.S. auto exports to the EU by 250%, while an Atlantic Council report said that the U.S. could increase metal manufacturing exports by 125% and processed food exports by 102%. The increase in motor vehicle exports would have been especially important to states in the South and Midwest. (Ohio and Illinois would have gained an estimated 27,000 and 30,000 jobs, and Southern states like Texas and Tennessee would have gained 68,000 and 13,000 jobs, respectively.) The West Coast stood to benefit, as well, as they rely most heavily on services trade with the EU, which makes up over one-third of the total services trade industry in all three West Coast states. In fact, with TTIP, all fifty states would have increased their exports to the EU and created jobs. 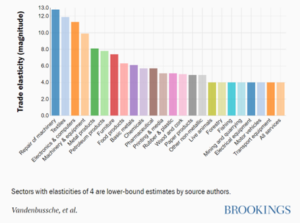 Biden’s Treasury secretary, Janet Yellen, has stated that increasing free trade could have “desirable” effects on inflation. Indeed, there is evidence that free trade can help reduce inflation through several mechanisms, particularly if it is part of more permanent, structural changes that can help ease inflationary pressures.

Since the bulk of tariffs are paid by consumers, thereby directly raising the price of goods, eliminating tariffs between the EU and the U.S. would directly lower costs for consumers. It is estimated that TTIP would reduce the consumer price index in the EU by 0.3%, and likely by a comparable amount in the U.S. When combined with the estimated long-term increase in real income of 0.4% and 0.5% for these regions, respectively, goods would broadly become more affordable by increasing the purchasing power of the average consumer. Relatedly, there would be lower barriers to entry for both the EU and U.S. markets for their respective companies, allowing potentially greater room for new market entrants, again increasing competition and lowering costs for consumers. As the World Trade Organization (WTO) simply put it, “protectionism is expensive.”

Free trade has historically brought down prices. In the U.S., WTO estimates that the North American Free Trade Agreement (NAFTA) and the Uruguay Round of the General Agreement on Tariffs and Trade, both created in the 1990s, have together increased the purchasing power of the American household by up to $2,000 per year. Certain industries that have been targeted by free trade agreements also demonstrate the benefits of trade liberalization. When the WTO reduced trade barriers on textiles in 2005, clothing prices in Europe fell by 15%. The organization also estimates that protectionist food policies in Europe in the 1990s cost the average family $1,500 per year, while a U.S. tariff levied on sugar in 1988 cost Americans $3 billion in one year. These price increases disproportionately hurt lower-income people, since this cohort spends a larger proportion of their money on goods.