The international foreign exchange market is a vast, complex assortment of globally dispersed actors and transactions that comprise millions of transactions daily, valued at trillions of dollars. On a daily basis, the value of global foreign exchange transactions eclipses the total global value of economic output and the value of all traded stocks and bonds. These markets are highly liquid as a result of extensive global communications systems and electronic trading venues that operate on a 24-hour basis. Foreign exchange markets respond rapidly to political and economic events and instantaneously transmit market signals across national borders. Governments are adopting or considering regulations to curtail some aspects of the foreign exchange derivatives market and are examining challenges posed by digital currencies.

Unexpected or abrupt disruptions in the foreign exchange market, and the global economy more broadly, can roil financial markets and economies around the globe with broad implications for economic activity. For instance, in January 2015, Switzerland removed the cap it had placed on the foreign exchange value of its currency; in August 2015, China depreciated its currency; and in June 2016, British voters endorsed a referendum to pull the United Kingdom out of the European Union. In 2018 and 2019, swings in financial markets reflected concerns over on-again, off-again trade talks between the United States and China. In each case, global financial markets experienced large shifts in positions over a short period of time.

Foreign exchange (FX) markets facilitate international commerce by making it possible for firms to exchange currencies for exporting and importing goods and services. The markets also supply currencies for foreign investment, for purchases of financial instruments, and to currency traders attempting to gain profits from short-term fluctuations in exchange rates. Some governments also hold foreign currencies as reserves to protect against fluctuations in currency exchange rates.

Trading in the foreign exchange market occurs in both traditional markets with organized exchanges and standardized products and in the over-the-counter (OTC) market that is informal with uniquely crafted products. Through international efforts, governments are attempting to standardize reporting and transactions in the OTC market. Traditional foreign exchange transactions consist of four kinds: spot transactions, forward transactions, swaps, and options. Spot and forward transactions are agreements that involve trading currencies immediately at the market exchange rate (spot transactions) or at some pre-arranged time in the future and at a pre-arranged rate of exchange (forward transactions). A swap is a contract to exchange currencies and to pay or receive interest payments over the duration of the contract. An option is a flexible forward transaction that allows the owner of the option to buy or sell a specific amount of foreign currency at a certain price before the pre-determined expiration date of the option contract. Over-the-counter foreign exchange derivative market transactions consist largely of interest rate contracts (primarily interest rate swaps and forward rate agreements in a single currency that are designed to manage exposure to changes in interest rates over the duration of the swap). 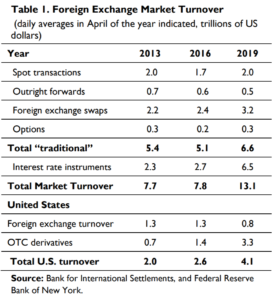 The BIS indicated that the sharp increase in the daily OTC turnover in interest rate derivative contracts in 2019 compared with 2016 reflects increased hedging and shifting of positions associated with concerns over monetary policy and global economic growth prospects, more comprehensive reporting, and the increased use of shorter term contracts.

Markets by Geographic Region. Foreign exchange trading activity is dominated by a few geographic locations, as indicated in Figure 1. London is the largest trading center, accounting for 41% of global volume. This share, however, may change as a result of Brexit (the British exit from the European Union), The United States (New York) accounts for less than half the U.K. share, or 17% of global trading. The next six countries—Singapore (7.6%), Hong Kong (7.6%), Japan (4.5%), Switzerland (3.3%), and France (2.0%)—combined with the U.K. and U.S. shares— account for about 85% of all daily foreign exchange market turnover. 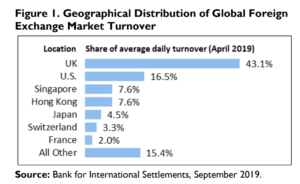 The Role of the Dollar. The U.S. dollar is the most heavily traded currency in FX markets, as indicated in Figure 2. It accounts for 88% of daily foreign exchange market turnover. (Because two currencies are involved in each transaction, the sum of the percentage shares of individual currencies totals 200% instead of 100%.) In comparison, the euro accounts for 32% of trades, the Japanese yen accounts for 17%, and the British pound accounts for 13%. Other currencies account for smaller shares: Australian dollar (7.0%), Canadian dollar (5.0%), Swiss franc (5.0%), and Chinese renminbi (4.3%).

As the dominant global reserve currency, the dollar is used to fund an array of financial transactions, including: Serving as an invoicing currency to fund commercial activities in international trade, even among countries that do not use the dollar as their national currency.

Through the Dodd-Frank Wall Street Reform and Consumer Protection Act (P.L. 111-203), Congress moved to regulate parts of the foreign exchange derivatives (swap) markets by: (1) registering and regulating swap dealers and major swap participants; (2) implementing clearing and trade execution requirements for certain foreign exchange swaps; and (3) establishing record keeping and reporting requirements. Congress may choose to use its oversight role to ensure that the new requirements promote transparency and greater stability in the foreign exchange derivatives market and to determine if new laws or regulations are necessary. The emergence of digital currencies and the increased role in international markets of currencies such as the Chinese renminbi may pose challenges for the dollar over the long run as the global economy’s dominant reserve currency. Also, Brexit may shift some foreign exchange trading from London to other locations in Europe, but may affect trading activity in New York. Congress may choose to assess and evaluate the continuing role of the dollar as the dominant global reserve currency and possible implications for U.S. economic and financial policies.