U.S.-China Tariff Actions by the Numbers

Since early 2018, the United States and China have imposed a series of tariffs against one another’s products, and these tariffs now affect a majority of trade between the two countries. U.S. tariffs imposed under Section 3011 of the Trade Act of 1974 (which followed an investigation on China’s intellectual property rights [IPR] practices) and China’s retaliatory tariffs affect the largest share of U.S.-China trade. Earlier U.S. tariffs (and Chinese retaliation) on steel and aluminum (Section 232) and solar panels and washing machines (Section 201) also affect U.S.-China trade. The Trump Administration argues that because they reduce U.S. demand for Chinese exports, the tariffs are an effective tool to pressure China to change its policies. The tariffs, however, also impose costs on U.S. stakeholders—U.S. tariffs increase the price U.S. firms and consumers pay on imports from China, while China’s retaliatory tariffs disadvantage U.S. exporters by making U.S. products relatively more expensive in the Chinese market.

In May 2019, citing a lack of progress in bilateral talks to address U.S. concerns, President Trump announced his intent to increase existing Section 301 tariffs and expand the range of products covered, leading to a series of escalations by both sides through the summer. In the midst of these tariff escalations, China allowed its currency to depreciate to an 11-year low, prompting the Trump Administration to declare China a “currency manipulator” under U.S. law.7 As of September 1, approximately 67% of U.S. imports from China are subject to increased tariffs, most in the range of 15%-25%, while approximately 60% of China’s imports from the United States face additional tariffs, most in the range of 5%-25%.8 These totals are an upper-bound estimate of total affected trade, as both countries have excluded a limited number of products from implemented tariff increases.

Both sides are set to increase tariffs further by the end of the year. On October 15, 2019, the United States is to increase many existing tariffs from 25% to 30%. On December 15, 2019, the United States is to impose an additional 15% tariff on most remaining imports from China and China is to both expand the coverage of its tariffs and increase certain existing tariffs (Figure 1). The Administration launched its Section 301 investigation on China due to concerns over China’s policies on IPR, subsidies, technology, and innovation and those policies’ impact on U.S. stakeholders.9 The investigation concluded that four broad policies or practices justified U.S. action: (1) China’s forced technology transfer requirements, (2) cyber-enabled theft of U.S. IP and trade secrets, (3) discriminatory and nonmarket licensing practices, and (4) state-funded strategic acquisition of U.S. assets. The Administration determined that increased tariffs on U.S. imports from China were an appropriate action to encourage China to alter its policies and practices.

The Trump Administration may have attempted to shield U.S. consumers from early tariff actions by targeting intermediate goods, but consumers may increasingly feel the effects of the tariffs, as the most recent and next round of tariff increases include major consumer goods such as cell phones, computers, apparel, and toys. There is also increasing concern that the tariffs may have negative effects on the U.S. economy. The Congressional Budget Office (CBO) estimates that the tariff increases in effect as of July 25 will reduce the level of real U.S. gross domestic product (GDP) by 0.3% by 2020.12 Uncertainty stemming from the fluctuating tariffs may also be dampening U.S. and Chinese business activity, including new investments. Analysis of earnings calls show that tariffs are a significant concern for many U.S. executives,and preliminary research suggests uncertainty from the tariffs may have reduced aggregate U.S. investment by 1% or more in 2018. Federal Reserve Chairman Jerome Powell cited concerns over weakening investment and exports, which he tied to trade policy uncertainty, as a main driver of the decision to lower interest rates in September. The International Monetary Fund (IMF) estimates that global trade conflicts will lead to a $700 billion loss to global GDP by 2020.

While overall bilateral trade increased in 2018, exports of products facing the most severe tariff increases, particularly U.S. agriculture exports, declined. As the tariffs increased during 2019, U.S.-China bilateral trade flows decreased significantly. Preliminary official U.S. data for 2019 indicate that—compared to the first eight months of 2018—U.S. merchandise exports to China dropped by 16% (down $13.4 billion), while U.S. imports from China fell by 13% (down $43.2  billion). In order to provide a snapshot of the scale and scope of the escalating trade conflict, this report examines 2017 trade flows of affected products, before they were affected by the tariffs and trade-weighted average tariff increases. The trade values have not been adjusted to account for specific product exclusions implemented by both countries (see text box below). 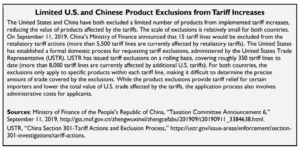