The United States and India view one another as important strategic partners to advance common interests regionally and globally. Bilateral trade in goods and services is about 3% of U.S. world trade, and has grown in recent years (Figure 1). The trade relationship is more consequential for India; in 2018, the United States was its second largest export market (16% share) after the European Union (EU, 17.8%), and third largest import supplier (6.3%) after China (14.6%) and the EU (10.2%). U.S.-India foreign direct investment (FDI) is small, but growing. Defense sales also are significant in bilateral trade. Civilian nuclear commerce, stalled for years over differences on liability protections, has produced major potential U.S. supply contracts. 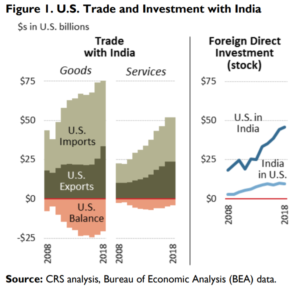 The Trump Administration, which views bilateral trade balances as an indicator of the health of a trading relationship, takes issue with the U.S. trade deficit with India, and has criticized India for a range of “unfair” trading practices that restrict U.S. exports to and investment in India. Indian Prime Minister Modi’s first term fell short of many observers’ expectations, as India did not move forward with anticipated market-opening reforms, and instead increased tariffs and trade restrictions. Modi’s strong electoral mandate may embolden the Indian government to press ahead with its reform agenda with greater vigor. Recent slowing economic growth in India raises concerns about India’s business environment.

Tariffs. Bilateral tensions have increased over each side’s tariff policies. India has relatively high average tariff rates, especially in agriculture. It can raise its applied rates to bound rates without violating its commitments under the WTO, causing uncertainty for U.S. exporters. India’s tariff hikes include raising tariffs on cell phones from 0% originally to 15% to 20%. The United States and others question India’s compliance with the WTO Information

Technology Agreement (ITA). India also raised duties on certain “non-essential” consumer and other goods to stem its current account deficit. The EU initiated WTO dispute settlement consultations, claiming that certain tariff hikes by India exceed bound rates. The United States and several other countries have requested to join the WTO consultations against India. U.S. concerns over Indian market access also include price controls on medical devices, and investment and other non-tariff barriers. India opposes the 25% steel and 10% aluminum tariffs that the United States has imposed on trading partners under the national-security based “Section 232” law.

India did not receive an initial exception like some trading partners, nor negotiate an alternative quota arrangement. India supplied 1.3% of U.S. steel and 3.4% of U.S. aluminum in 2018. India repeatedly delayed applying planned retaliatory tariffs against the United States, hoping to reach a bilateral resolution on trade issues. Soon after India lost its GSP eligibility, India announced it would impose higher tariffs affecting about $1.4 billion of U.S. exports, such as nuts, apples, and chemicals. The United States and India are challenging each other’s tariff measures in the WTO.

In 2018, India was the largest beneficiary of GSP; over one-tenth ($6.3 billion) of U.S. goods imports from India entered duty-free under the program, such as chemicals, auto parts, and tableware. GSP removal reinstated U.S. tariffs, which range from 1% to 7% on the top 15 GSP bilateral imports. U.S.-India trade negotiations reportedly have discussed potential reinstatement of India in GSP, which some Members of Congress and U.S. businesses support.

Services. The United States and India are competitive in certain services industries. Barriers to U.S. firms’ market access include India’s limits on foreign ownership and local presence requirements. A key issue for India is U.S. temporary visa policies, which affect Indian nationals working in the United States. India is challenging U.S. fees for worker visas in the WTO, and monitoring potential U.S. action to revise the H-1B (specialized worker) visa program. India also continues to seek a “totalization agreement” to coordinate social security protection for workers who split their careers between the two countries.

Agriculture. Sanitary and phytosanitary (SPS) barriers in India limit U.S. agricultural exports. The United States questions the scientific and risk-based justifications of such barriers. An ongoing issue is India’s purported compliance with a WTO decision against its ban on U.S. poultry imports and live swine due to avian influenza concerns; the WTO held that India’s measures violated WTO SPS rules. Each side also sees the other’s agricultural support programs as market-distorting; India’s view of its programs from a broad food security lens complicates matters.

Intellectual Property (IP). The two sides differ on how to balance IP protection to incentivize innovation and support other policy goals, such as access to medicines. India’s IP regime remains a top U.S. concern, and India remains on the “Special 301” Priority Watch List for 2018, based on such concerns as its treatment of patents, infringement rates, and protection of trade secrets.

“Forced” Localization. The United States continues to press India to address its “forced” localization practices, such as in-country data storage, domestic content, and domestic testing requirements—viewed by the United States as presenting barriers to trade with India. Adding to U.S. concerns are India’s new restrictive localization rules for certain financial data flows, which affect companies such as Visa and MasterCard. At the same time, India has moved to ease some local sourcing rules for single-brand retailers, which would affect companies such as Apple.

Investment. India aims to attract foreign investment and has made FDI reforms, such as raising foreign equity caps for insurance and defense, and other strides to improve its business environment (World Bank, Doing Business Indicators). U.S. concerns about investment barriers remain nevertheless, heightened by new Indian restrictions on how e-commerce platforms such as Amazon and Walmartowned Flipkart conduct business. From the U.S. view, India’s weak regulatory transparency and other issues, such as India’s IPR and localization policies (see above), add to concerns about FDI barriers. Two-way U.S.-Indian FDI is linked to U.S. jobs and exports in a range of sectors, yet U.S. FDI in India prompts some offshoring concerns.

Defense Trade. The two nations have signed defense contracts worth more than $15 billion since 2008, up from $500 million in all previous years combined. Major anticipated sales include 24 MH-60 Seahawk multi-role naval helicopters and a potential commercial sale of AH-64 Apache attack helicopters. India is eager for more technology-sharing and co-production; some reports indicate U.S. and Indian interest in producing F-16 combat aircraft there.

Bilateral Engagement. The United States and India trade on WTO terms, as they do not have a bilateral FTA. In 2018, President Trump stated that India expressed interest in negotiating an FTA. Some India watchers advocate for an FTA, while others question India’s willingness to open its markets. Past negotiations on a BIT are stalled due to differences on approaches to investor protections. Over the years, the two sides have engaged on trade issues through various dialogues. The government-to-government Trade Policy Forum (TPF) has not met regularly in recent years amid growing trade frictions. The private sector-based CEO Forum also is an opportunity for bilateral engagement. 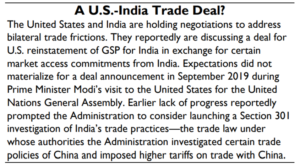 Regional Integration. India is party to negotiations on the Regional Comprehensive Economic Partnership (RCEP) with China and 15 other Asia-Pacific nations. Seven RCEP members (but not India) were among the 11 remaining parties to the proposed Trans-Pacific Partnership (TPP). After President Trump ceased U.S. participation in the TPP, these 11 parties signed the new Comprehensive and Progressive Agreement on TPP (CPTPP), which became effective on December 30, 2018. Among other issues, India has long sought to join the Asia-Pacific Economic Cooperation (APEC) group of the United States, China, and 19 other economies. The United States stated previously that it welcomes India in APEC. Some question if India is willing to make sufficient economic reforms to join APEC.

WTO. The United States and India often have opposing stances in the WTO, whose future direction is unclear amid debate over institutional reforms and future negotiations. With India’s growing integration in the global economy, some policymakers have called on India, like China, to be a more responsible stakeholder in the international rulesbased trading system. They blame India for impeding WTO progress on certain issues, such as e-commerce customs duties and fisheries subsidies.

ndia previously blocked the Trade Facilitation Agreement (TFA), which ultimately entered into force in 2017, until a compromise was reached on treatment of certain food security programs. The United States and some developed countries have criticized India, China, and certain other countries for self-designating as developing countries to claim special and differential treatment under the WTO rules. India, China, and some of these countries have pushed back on this criticism.

Questions on U.S.-India trade relations may include