August, which is supposed to be a somnolent month, has erupted in 2019 in a blaze of threats and tariff escalations. At times, President Donald Trump’s trade war with China has seemed like it was spinning out of control. A pivotal moment occurred August 23 when China announced details of its long-anticipated retaliation to Trump’s newest tariffs on $300 billion of Chinese imports. Trump’s immediate response was for yet another round of his own tariffs and a bizarre directive to US companies to pull out of China.

If the two sides follow through with their now formalized tariff plans, the US-China trade war will undergo a structural shift. What follows is an explanation of the implications of the tariffs that have been announced so far. Though no one can predict the future, it is worth recalling the historian Barbara Tuchman’s The Guns of August, which provides a step-by-step telling of how leaders stumbled into the disaster of World War I: “War is the unfolding of miscalculations,” she wrote. One can only hope that Trump and President Xi Jinping step back from the guns of August 2019.

For China, the only big structural change wrought by its August 23 announcement is the re-application of massive tariffs on US autos and parts starting December 15. While this action would affect nearly 10 percent of US goods exports to China, at the same time nearly a  third of total US exports to China would still remain untouched by Beijing’s retaliation. Despite Trump’s provocations, China has not imposed extra duties on major US exports like aircraft, semiconductors, and pharmaceutical products. An important—if little-noticed—aspect of the latest skirmish is that China continues to take a very measured response with its own retaliation to Trump’s continued escalation.

Given that China’s announcement was a fully expected response to Trump’s own actions, the bigger shift may be on the American side. The rapidity and severity of Trump’s response had the appearance of political opportunism. It was an occasion for the president to be seen as getting tough on China, even if the brunt of the economic pain of his even higher US tariffs would fall on American consumers and businesses.

The bottom line result is that in less than two years, Trump will have increased the average tariff on Chinese imports above 24 percent, compared to an average of only 3 percent at the onset of the trade war. Trump’s actions will affect nearly everything Americans purchase from China.

On August 23, Beijing announced it would impose additional tariffs on $75 billion of US exports. The Chinese government had long indicated this retaliation was forthcoming, even before the Trump administration’s formal August 13 announcement that it would impose tariffs on $300 billion of imports.[1] The Chinese tariffs were timed to accompany Trump’s upcoming rollout of two new sets of duties: the first tariff increase arriving on September 1 and the other arriving on December 15. This was unsurprising to most, given that China has matched the timing of each of the Trump administration’s previous tariff increases during the trade war.

Overall, China’s average tariff applied to US exports will increase from its current level of 20.7 percent to 21.8 percent on September 1 and to 25.9 percent on December 15 (figure 1). This is a sharp increase from the 8.0 percent average tariff that faced US exporters to access the Chinese market before the trade war started in January 2018. China has also cut its tariffs toward non-US exporters considerably over this same period, to a current level of 6.7 percent. 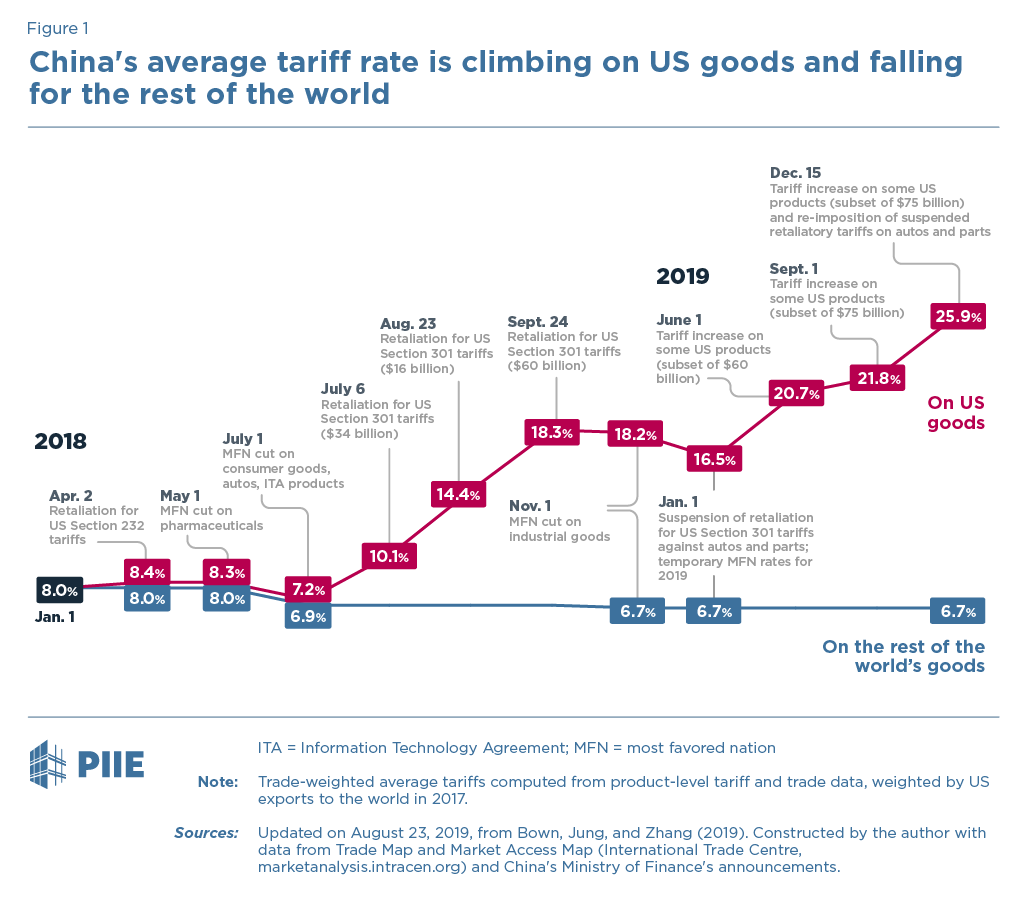 CHINA’S NEXT TARIFFS HIT SOME NEW PRODUCTS, LIKE AUTOS AND PETROLEUM. BUT AIRCRAFT, SEMICONDUCTORS, AND PHARMACEUTICALS REMAIN LARGELY UNTOUCHED.

Overall, China’s next rounds of tariffs affect $74.2 billion of 2017 US exports, increasing duties on $28.7 billion of trade on September 1, 2019, and $45.5 billion on December 15. Yet most of the tariff increases apply to products that China has already hit at least once with new tariffs during the trade war.

The product coverage of the Chinese retaliation will increase modestly from its current level of 56 to 58 percent of China’s imports from the United States on September 1. It will then expand more considerably to 69 percent on December 15.

There are a number of contributing factors behind why only 56 percent of US exports to China are currently covered by China’s retaliatory tariffs.[2] But one of the most important is that Beijing had stopped retaliating over most autos and parts—covering roughly $14 billion of US exports—as a goodwill gesture on January 1, 2019.

China’s upcoming retaliation targets relatively few new products. Only $3.2 billion of petroleum products are added to China’s retaliation with its September 1 list (figure 2). Its December 15 list expands the scope of covered products, but mostly through the reapplication of its retaliatory tariffs on autos and parts that had been suspended on January 1. Chemicals ($1.1 billion) and handful of other products are also added to the retaliatory list as of December 15. 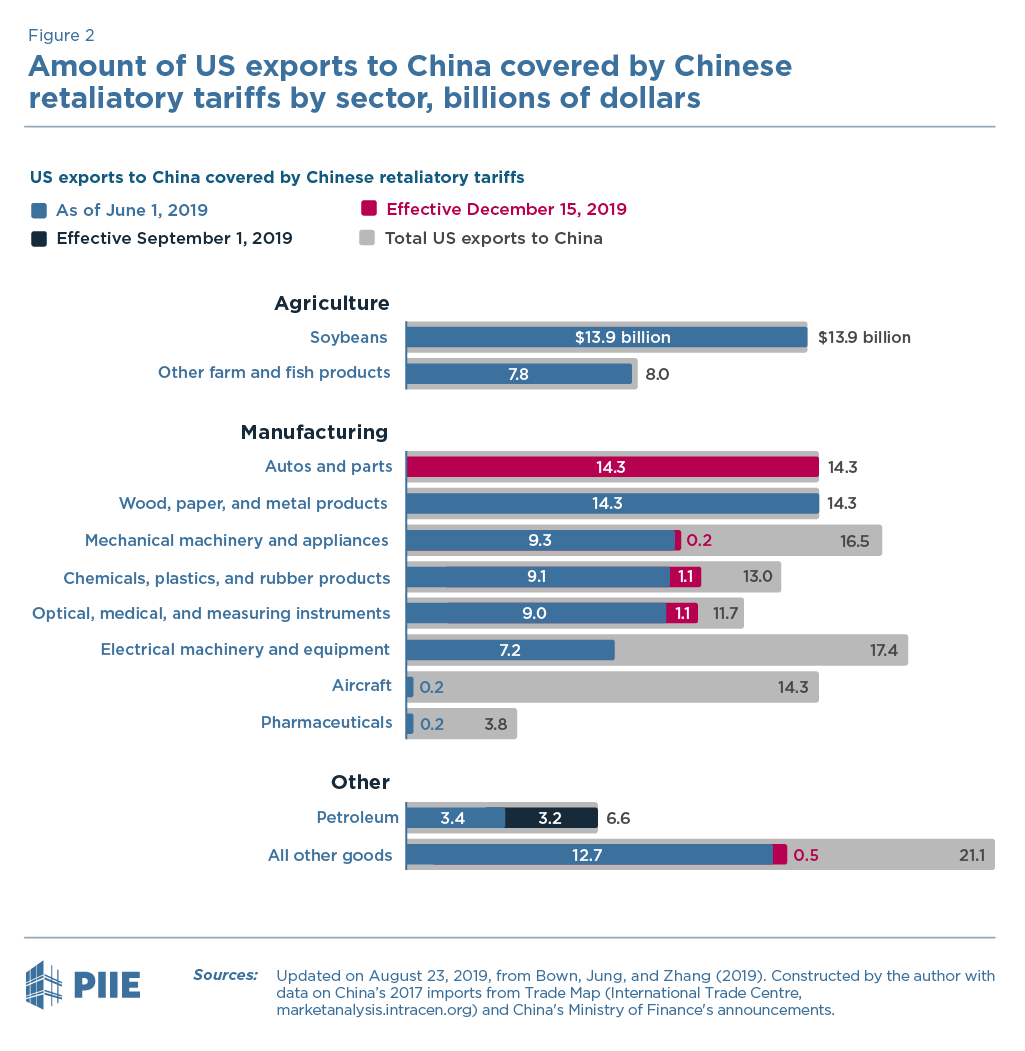 It may appear somewhat remarkable that 31 percent of US exports to China would remain untouched by Chinese retaliatory tariffs even after December 15. Despite Trump’s decision to impose tariffs against almost all US imports from China and his continued efforts at escalation (discussed below), Chinese retaliation will not cover products such as aircraft ($14.1 billion), semiconductors ($10.2 billion), and pharmaceuticals ($3.6 billion). Those three items make up more than half of the value of products untouched by Chinese retaliation as of December 15.

One contributing explanation behind China’s restrained retaliation against the United States is that tariffs are costly, even to the country imposing them.

SOME OF CHINA’S TARIFF INCREASES WERE SYMBOLIC. OTHERS WIDEN DIFFERENTIALS FACING US EXPORTERS AND EXPORTERS IN THE REST OF THE WORLD.

The most economically significant Chinese tariff increase will take place on December 15 and affect autos. Overall, the average Chinese auto sector tariff on US exports will increase from its current level of 12.6 to 42.6 percent (figure 3). Mechanically, there are two ways China is sharply increasing the tariff on US auto exports.

The first part of China’s announcement on August 23 stated it would no longer suspend its original retaliatory tariffs on auto products, which ranged from 5 to 25 percent. China had first slapped retaliatory tariffs on autos and parts beginning in July 2018, but it had suspended those tariffs effective January 1, 2019 (see again figure 1), as part of the truce between Presidents Trump and Xi negotiated in Buenos Aires on the sidelines of the Group of 20 (G-20) summit. The second part of the imminent tariff hike on autos derives from being on the new list of products facing additional increases of 5 to 10 percent going into effect on December 15.

For some auto products, the combination of these two announcements will be a 35 percentage point increase in the tariff from current levels. For products over which China’s currently applied MFN tariff—the duty facing car makers in Japan, South Korea, or Germany—is 15 percent, the Chinese tariff facing US auto exports will rise to as high as 50 percent. 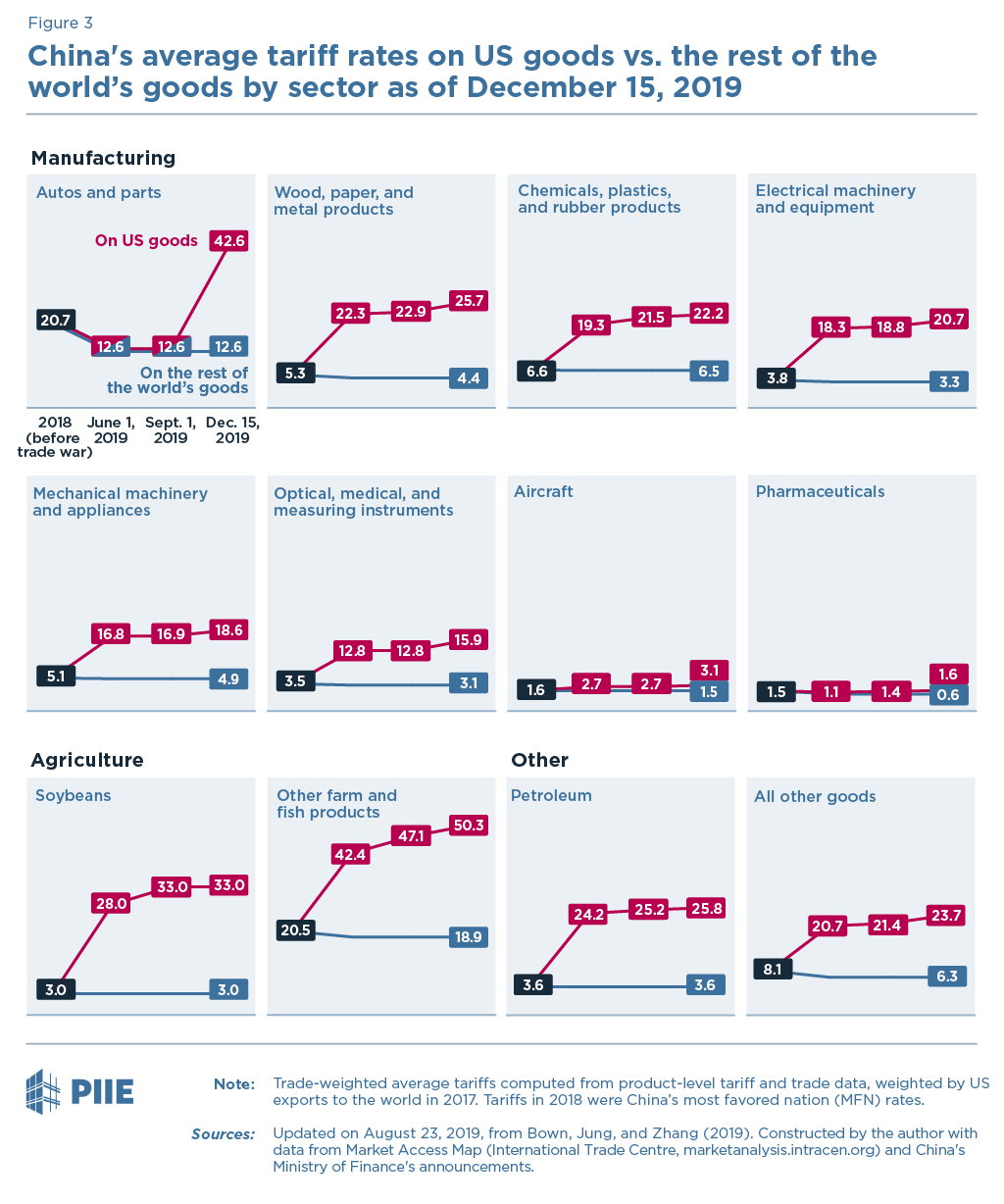 For most other sectors, China’s announcement means a relatively moderate tariff increase on September 1 and then again on December 15. For example, the average tariff for wood, paper, and metal products will increase only from 22.3 to 22.9 percent on September 1, and then to 25.7 percent on December 15. Furthermore, the tariff increases in this and most other sectors does not bring in any new products (see again figure 2).

On soybeans, Beijing will also increase the retaliatory tariff another 5 percentage points—to 30 percent from the 25 percent that had been in effect since July 6, 2018. However, this move is largely symbolic, given that the 25 percent tariff was enough to stop most Chinese purchases of US soybean exports in favor of increased imports of soybeans from Brazil and Argentina.

The Trump administration responded quickly to the Chinese tariff announcement that arrived the morning of August 23 in Washington. By 5:00 p.m. the same day, the president had tweeted his plan for additional tariffs on China, with details spelled out in a USTR press release.

Trump also announced that, starting October 1, his current tariff of 25 percent on $250 billion of Chinese imports will increase to 30 percent.[5]

Trump’s plan results in a sharp tariff increase on imports from China in a relatively short period of time (figure 4a). The average US tariff on imports from China will climb from its current level of 18.3 percent to 21.2 percent on September 1, to 22.1 percent on October 1, and to 24.3 percent on December 15. This is up from an average of only 3.1 percent less than two years ago, before the tariff escalation started.

Nevertheless, these announcements did not change the scope of product coverage of Trump’s tariffs from his announcement of August 13.[6] Currently 50.6 percent of US imports from China are covered by Trump’s tariffs (figure 4b). That trade coverage will increase to 68.5 percent by September 1 and 96.8 percent of US imports from China by December 15.

If Trump’s new tariffs go into effect as described in his current plans, virtually all imports from China in all sectors will be fully covered by December 15 (figure 5). 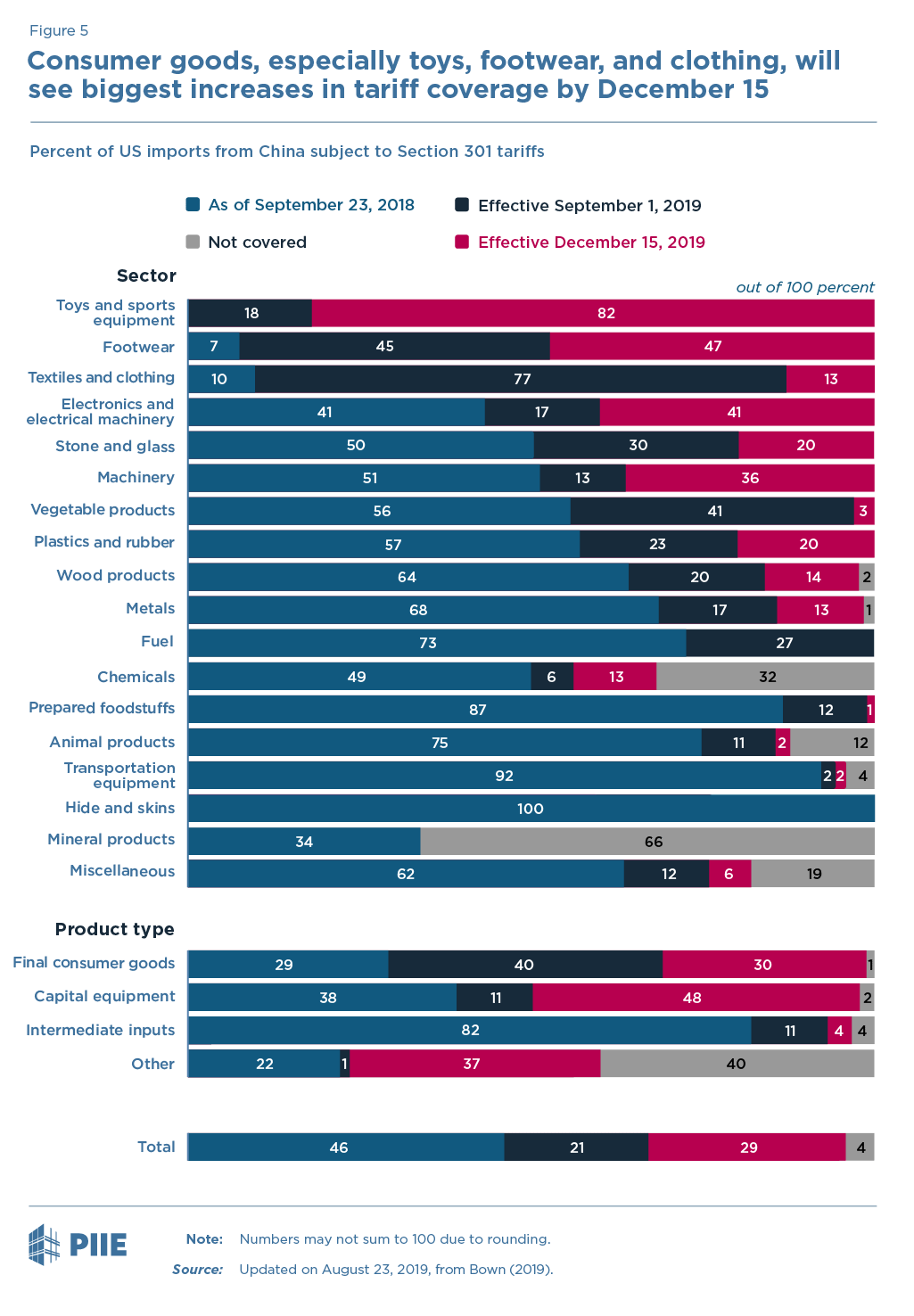 Other trade policy news developed alongside and subsequent to these tariff announcements of August 23.

Shortly after China’s retaliation announcement, Trump raised the stakes of his trade war rhetoric in a 10:30 a.m. tweet by referring to Chinese President Xi as potentially an “enemy.” At 10:59 a.m. he then tweeted his directive that “Our great American companies are hereby ordered to immediately start looking for an alternative to China.” And then just before midnight, Trump made one final and worrisome trade war tweet that signaled that he might be prepared to do even more damage to the US-China relationship and legally follow through with his order, “For all of the Fake News Reporters that don’t have a clue as to what the law is relative to Presidential powers, China, etc., try looking at the Emergency Economic Powers Act of 1977. Case closed!”

Additional news on Trump’s trade war surfaced over the next three days at the Group of 7 (G-7) summit in Biarritz, France. First, Trump publicly stated he had second thoughts about his escalation with China. Shortly thereafter, the White House press secretary reversed course by indicating that Trump only regretted not raising tariffs on China further. Then, perhaps in an attempt to calm financial markets at the opening of the week, Trump indicated that he thought the United States and China might soon return to the negotiating table.

The purpose and next steps in Trump’s trade war remain unknown. The economic significance of these next tariffs in the offing are not.

1. The formal Federal Register notice was published on August 20, 2019.

2. For example, the Chinese government announced it was retaliating over lists of products covering $50 billion and then $60 billion of US exports at different points in 2018. Given that Chinese imports from the United States tallied $155 billion in 2017, a back-of-the-envelope estimate is tariff coverage of 71 percent of US exports. Bown, Jung and Zhang (2019) provide a more complete explanation of why the actual trade covered by Chinese retaliatory tariffs was so much lower than 71 percent.

4. There was some confusion as to whether the December 1 list would be shifted earlier since Trump’s tweet said “from Sept 1,” but the USTR announcement clarified the date.

6. The tariff increase from 25 percent to 30 percent on October 1 will be subject to a round of public comment before the application, so there is the possibility that there could be a change in the list of affected products.

The data underlying this analysis are available here [zip].