Blogs > In Colombia, Free Trade Has Come With More Violence 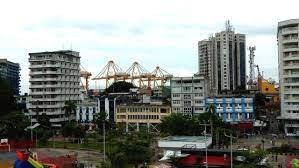 In Colombia, Free Trade Has Come With More Violence

BUENAVENTURA, Colombia—Jhon Jairo Castro Balanta was about 20 years old when he first started organizing port workers in the Colombian coastal city of Buenaventura. After the port was privatized in 1993, he noticed how wages stagnated. He saw “exploitation, outsourcing, discrimination, humiliation, all those abuses.”

Castro Balanta became president of the Buenaventura Port Workers Union, and in 2011, he traveled to Washington during negotiations over the U.S.-Colombia Trade Promotion Agreement to testify to Congress about poor labor conditions. Around then, the death threats started, he recalled, speaking to Foreign Policy over the phone from New York City, where he is now seeking asylum after fleeing Buenaventura in November 2020.

Buenaventura, a city of roughly 460,000 people with rampant unemployment and gang violence, sits on the Pacific coast of Colombia. Over the years, more and more Colombians displaced from conflict in the country’s interior have ended up there, many of them living in abject poverty. The city’s main source of employment is the port, which handles more than half of Colombia’s imports and exports.

But resentment simmers among Buenaventura residents over the fact that little money flowing through the port enriches the city, where armed groups run rampant, controlling every aspect of the economy and hiking up prices for even basic food items. Castro Balanta and other Bonaverenses say locals are only hired for menial labor, don’t receive a living wage or social security benefits, and face death threats if they try to unionize. Employees often work 24 to 36 hours at a time, sometimes even staying 23 days without returning home until a ship is loaded, Castro Balanta said.

These labor abuses are what held up the U.S.-Colombia free trade agreement for years before it was eventually signed in 2012. Legislators had fiercely debated signing such an agreement with a country where unionists are regularly murdered with impunity. Some expected it might actually be the first deal of its kind to get voted down in U.S. Congress. To move forward, then-President Barack Obama and then-Colombian president Juan Manuel Santos signed an Action Plan Related to Labor Rights, which included a commitment to address violence against labor union members and bring perpetrators of such violence to justice.

At the time the accord was struck—around the time formal negotiations to end the war with the Revolutionary Armed Forces of Colombia (FARC) were beginning—the U.S.-Colombia Business Partnership said the agreement would “strengthen democratic institutions in Colombia that are under threat by violent actors in Colombian society—guerrillas, self-defense forces, and narco-traffickers” and bring “more legitimate jobs and opportunity.”

But as the countries mark nearly a decade of the plan, few of those promises have come to fruition. Gang violence, unemployment, and narcotrafficking have only increased. In fact, Buenaventura has gained notoriety in recent years for its “chop houses,” where tortured victims of gangs and armed groups later end up dismembered. Colombia was ranked the deadliest country in the world for human rights defenders in 2020, and 172 trade unionists have been murdered since the labor rights action plan went into force. Indeed, residents contend that increased trade has actually worsened gang violence as armed groups compete for control of territory designated for the planned expansion of the port.

Obama and Santos may have had good intentions with the Labor Action Plan, but it had no enforcement mechanism. “A lot of the institutional changes and a lot of the policies that had to start happening, they happened like halfway or they weren’t really implemented, and once the agreement was passed in Congress in the U.S., the Santos government didn’t do anything to continue these kinds of commitments,” said Daniel Rangel, Global Trade Watch research director for the consumer advocacy group Public Citizen. “Since the agreement wasn’t part of the main deal, then it was very hard for stakeholders to make the Colombian government accountable for this lack of enforcement of the obligations.”

Both Rangel and Castro Balanta surmise if U.S. Congress had waited longer, it might have been able to incentivize the Santos government to make more concrete changes by leveraging the trade agreement. “The trade agreement could have helped, but I think that in their eagerness or because of pressure from the big businessmen, the big multinationals, that both governments turned the page,” Castro said. “Colombia was lying that it was complying, and the U.S. government turned a deaf ear to the various statements of NGOs and unions and workers’ commissions that came and expressed that things were not getting better.”

Beyond the lack of an enforcement mechanism, residents, researchers, and activists say the Colombian government has felt free to neglect Buenaventura and similar regions because they are majority of Afro-descendant, a group that has historically faced worse social conditions, lack of public services, and discrimination compared to the country’s white-mestizo majority.

“The national government invests in Buenaventura through the port infrastructure,” said Danelly Estupiñán, an activist who works with a local nongovernmental organization called the Process of Black Communities. “It does not make investments to the Buenaventura society, to the people of Buenaventura.” The city’s population is about 95 percent Afro-descendant and Indigenous. “From our judgment,” the lack of investment is “precisely for that reason.”

Estupiñán travels under constant protection of two bodyguards and an armored car ever since a report she worked on five years ago exposed links between the city’s port and rising violence and poverty. “Because they don’t conceive of us as people, they conceive us as things, and that is a colonial legacy,” Estupiñán said. “In the colony, people of African descent, Indigenous people were not seen as people. They were not even human. They were seen as things that were marketed, things that were sold, things that were controlled.”

In 2017, anger in Buenaventura led hundreds of thousands of people to take to the streets in a massive Civic Strike. After a wave of violence in December 2020 and January of this year, hundreds of residents demonstrated, claiming lack of government attention even after it made concessions to fund the city’s lack of basic services in the wake of the 2017 strike. These February series of demonstrations blocked access to the port and called for government intervention.

The unrest and recent wave of violence is perhaps what led the U.S. Labor Department to announce a $5 million “cooperative agreement” in January to improve labor rights for Afro-Colombian port workers in Buenaventura and other ports. (Neither the U.S. nor the Colombian Labor Department responded to requests for comment.) But at a time when Colombia’s government is undoing old agreements and facing criticism for its antagonistic relationship with international human rights bodies, there is little reason to trust it will live up to its word.

The landmark 2016 peace accords with the FARC was supposed to reintegrate former paramilitary members and bring economic development to Indigenous and Afro-Colombian regions, which were affected disproportionately by the conflict with the militant group-turned-political party. But the current conservative government under President Iván Duque Márquez campaigned on dismantling those peace accords and has dragged its feet on implementing them.

Indigenous and Afro-Colombian groups, as well as the United Nations’ human rights body, have demanded action from the president to fully implement the peace accords and tackle lawlessness and poverty in remote and poor regions. If he doesn’t, violence will continue to rise and push people toward cities like Buenaventura, which are already on a knife’s edge.

Many displaced people have ended up in neighborhoods like Isla de la Paz, where roughly many families hail from different violence-ridden regions of the country. The port is set to expand to accommodate free trade agreements with 17 countries, including the United States, and it is neighborhoods like this that are under threat of being razed.

One mother of three from Isla de la Paz, said that residents are unable to expand to build houses for more neighbors because, in the middle of the night, men will come to knock down any houses under construction. She said utility companies don’t want to provide services like internet because they know the community is soon to be displaced and spending money there would be a “lost investment.”

“What’s happening in a lot of those areas has been, first, the real hesitance from part of the national government and departmental governments to really provide people in those areas with basic things like potable water, sewage systems, or what have you,” said Gimena Sánchez-Garzoli from the Washington Office on Latin America. “And really pressuring them to get out of those areas so that they can rebuild those areas for the port infrastructure.”

The mother of three, who fled violence and kidnappings from armed groups and fumigation of coca crops from the town of Buenos Aires in Cauca province when she was 12 years old, said armed men often came and threatened residents, including the children, putting them always on the defensive

“We’re slaves to our own surroundings,” she said.

With national demonstrations planned for April 28, Sánchez-Garzoli predicts they will restart protests in Buenaventura—and eventually trigger another repressive response. The current conservative administration has been reluctant to engage with the leaders of social movements, and she anticipates they might only pay lip service to the Labor Action Plan—if that.

“They just don’t see the importance of engaging or trying to find solutions for those sectors,” she said. “Their priority really is the private sector. I just think that’s all going to explode.”

Genevieve Glatsky is a journalist in Bogotá. Her writing has appeared in Politico, the Independent, and more.