Goods trade with G20 countries dropped sharply in the first quarter of this year as a result of Covid-19 containment measures, with steeper declines expected in the second quarter, new OECD figures reveal.

Initiatives to halt the spread of the virus, including nationwide lockdowns and international travel restrictions, did not start in most G20 nations until March this year. Despite that, data published today shows exports dropped by 4.3% in the first three months of this year, compared to Q4 2019. Imports dropped by 3.9% over the same period.

The data also includes snapshots of the OECD’s predictions for Q2, which suggest figures will further deteriorate.

“Early indications for April point to more precipitous falls in the second quarter, with Korean and Japanese exports, for example, falling 21.5% and 10.6%, respectively, compared with March 2020,” the OECD adds.

At country level, figures for Q1 vary widely depending on how and when governments put in place strategies for halting the spread of the virus.

India, where lockdown included a shutdown of shipping activities as well as restrictions on the supply of generic pharmaceuticals, experienced a relatively sharp 9.2% drop in export volumes. Imports, however, dropped by only 2.3%.

There was a steep drop in both exports and imports in China, which was the centre of the initial outbreak. Exports fell by 9.3% and imports by 7% in the first quarter, the OECD says. China’s lockdown measures led to a sharp fall in production as factories were closed, though there are already signs of recovery.

Japan’s exports and imports fell by 4% and 4.4% respectively. Somewhat surprisingly, South Korea’s exports actually increased by 3.3%, while imports dropped by a relatively low 1.2%, though the OECD says the disruption to supply chains across Asia has resulted in “considerable volatility” throughout the quarter.

Russia and Saudi Arabia also experienced steep drops in outbound trade, which the OECD says were exacerbated by the collapse in oil prices. Exports fell by 9.9% and 10.2% respectively as crude prices plummeted, at one point entering negative territory for the first time in history.

Among the G20’s European members, Germany appears to have fared best, with exports and imports dropping by 3.5% and 2.4% respectively. The UK, which has suffered Europe’s worst death toll according to government statistics, saw exports fall by 7.8% and imports by 6.5%.

In North America, exports from Canada and the US fell by 4.2% and 1.9% respectively. Mexico and Brazil – initially less exposed to the virus in the first quarter of the year – saw exports rise by 1% and 2.8%.

Figure 1: Change in import and export volumes by country 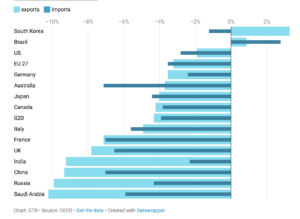 The findings echo data published in late April by the CBP World Trade Monitor, an influential month-by-month record of worldwide goods trade, which also shows a decline in mercantile trade.

Around the globe, CBP found trade volumes fell by 1.4% in January compared to December, and a further 1.5% in February – a steeper decline than it had initially predicted – with further, sharper drops anticipated in the coming months.

The World Trade Organization says that depending on how long Covid-19 containment measures last – and whether there are other exacerbating factors such as further collapses in commodities prices – worldwide trade could fall by between 13% and 32% over the course of the year.

The OECD did not publish detailed forecasts for Q2’s figures. However, it has previously estimated that lockdown measures could result in an initial drop in output of between 20% and 25% in many economies. At the same time, consumer expenditure is predicted to fall by around a third.

“Changes of this magnitude would far outweigh anything experienced during the global financial crisis in 2008-09,” it says in an April report. “This broad estimate only covers the initial direct impact in the sectors involved and does not take into account any additional indirect impacts that may arise.”

OECD secretary-general Angel Gurría adds that each month of containment is expected to result in a 2% drop in annual GDP growth, with many economies falling into “unavoidable” recession.

“Our analysis further underpins the need for sharper action to absorb the shock, and a more co-ordinated response by governments to maintain a lifeline to people and a private sector that will emerge in a very fragile state when the health crisis is past,” Gurría says.