Group of Seven (G7) leaders meeting in Cornwall, England, on June 11-13 agreed on a new initiative to support global infrastructure investment, launched as global needs rise and China’s Belt and Road Initiative (BRI) pulls back. Details on the initiative were sparse in the lengthy G7 communiqué, but the Biden White House issued a more detailed fact sheet dubbing the initiative “Build Back Better World (B3W)” and describing it as “a values-driven, high-standard, and transparent infrastructure partnership led by major democracies to help narrow the $40+ trillion infrastructure need in the developing world.” The core of the initiative involves catalyzing private capital to invest in global infrastructure, with a focus on four areas: climate, health and health security, digital technology, and gender equity and equality.

Q1: What prompted this initiative?

A1: The United States and other G7 countries have developed common concerns about China’s ambitious BRI since it was launched by President Xi Jinping in 2013. These include, for example, a lack of transparency around Chinese lending, corruption, unsustainable debt, adverse environmental and social impacts, and projects with dual-use potential. The Biden administration has framed the initiative as a response to BRI, noting in the first line of its fact sheet: “Today President Biden met with G7 leaders to discuss strategic competition with China and commit to concrete actions to help meet the tremendous infrastructure need in low- and middle-income countries.”

Unmet global needs are another primary driver. China’s BRI has significantly pulled back in recent years, underscoring Beijing’s challenges in managing the endeavor and presenting an opportunity for G7 countries to offer competing alternatives. To be sure, China’s BRI was never as big as sometimes portrayed, reaching into the hundreds of billions rather than trillions of dollars. A lack of transparency, and the absence of official criteria for projects, makes it difficult to track the BRI with precision. But the overall trend is clear: as the list of countries participating in the BRI has ballooned, the resources being made available to those countries have plummeted. The Covid-19 pandemic has further increased needs in the developing world while reducing the ability of many countries to borrow. 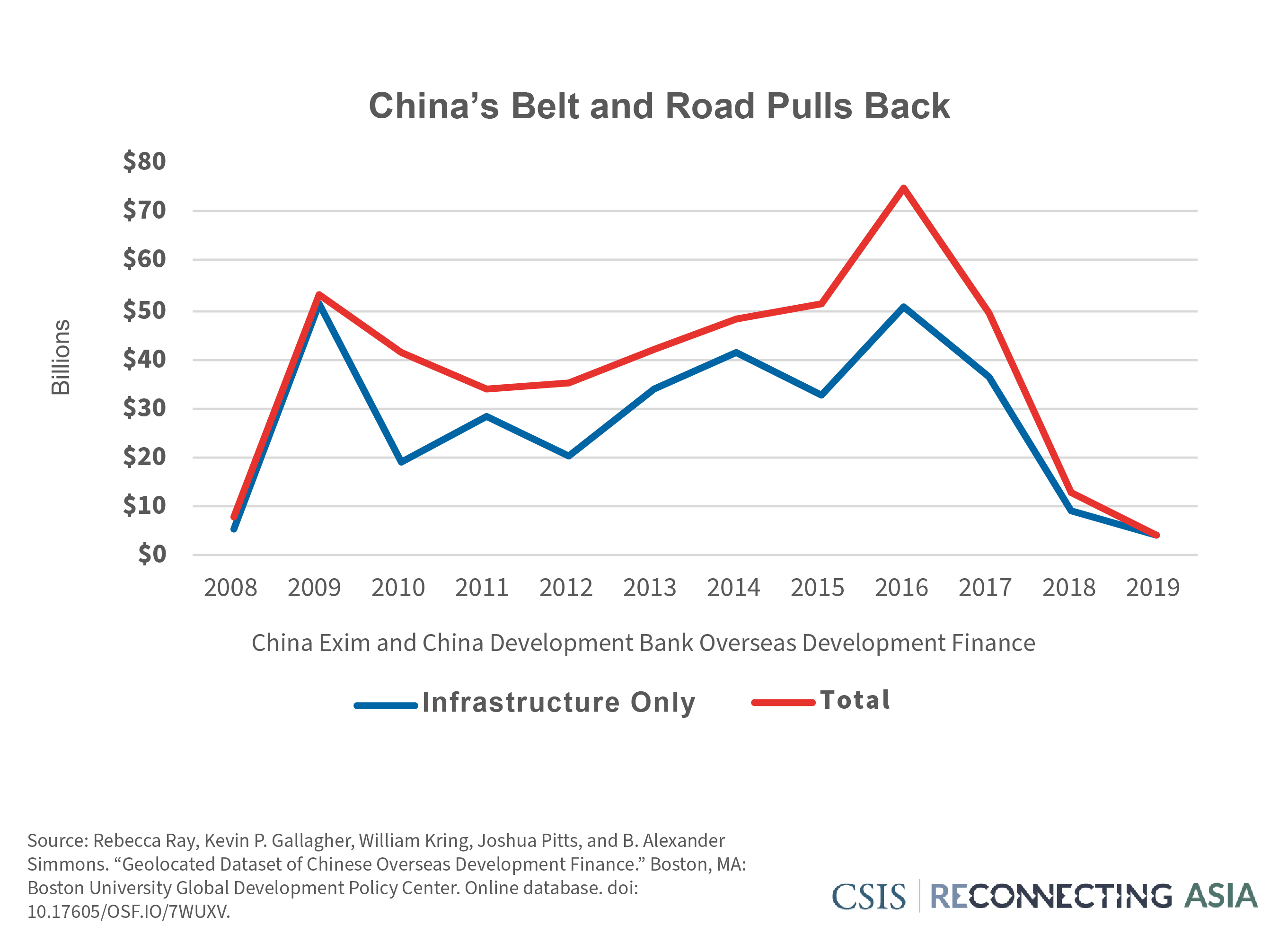 Although competing alternatives to the BRI are gaining new momentum, they have struggled to deliver tangible projects. As host of the Group of 20 (G20) in 2019, Japan won endorsement by G20 leaders (including Xi Jinping) to a set of principles for quality infrastructure investment. The same year, Japan and the European Union announced a “Partnership on Sustainable Connectivity and Quality Infrastructure.” This January, the European Parliament adopted a resolution that calls for creating a global EU Connectivity Strategy as an extension of the current EU-Asia Connectivity Strategy. Attending this year’s G7 summit as an observer, India announced the Asia Africa Growth Corridor with Japan in 2017 and is discussing a joint initiative with the European Union.

For its part, the United States has gradually realized the importance of offering positive alternatives. In late 2019, United States, Japan, and Australia announced the “ Blue Dot Network” (BDN) to help operationalize the G20 principles. The effort has received encouraging interest from the private sector and civil society, but it is still developing criteria for certifying projects that meet high standards. The B3W could add urgency to announce pilot projects and work toward expanding the BDN to include European partners.

The B3W’s global scope could allow partners to focus on different functional and geographic areas in line with their capabilities and interests. European partners, for example, are increasingly active in the Western Balkans, where Chinese projects have raised red flags in several EU-candidate countries. Japan has been active in Southeast Asia, where it remains the incumbent provider of infrastructure projects. U.S. involvement is likely to emphasize the Indo-Pacific, which will also help respond to criticism that the Biden administration, which has resisted the idea of rejoining the Trans-Pacific Partnership or other regional trade agreements, lacks a credible economic strategy in the region.

Q2: Why the focus on mobilizing private capital?

A2: Global demands for infrastructure cannot be met by public capital alone. During 2015-19, G7 countries provided nearly $113 billion in official development assistance for foreign infrastructure projects, as illustrated below. That support is fundamentally different from most of China’s BRI lending, which comes with higher interest rates and does not adhere to the Paris Club principles. While remaining steady as China’s BRI has declined, the G7’s combined assistance is only a fraction of what the developing world needs. Developing Asia alone will require $26 trillion in infrastructure investment through 2030, according to the Asian Development Bank. 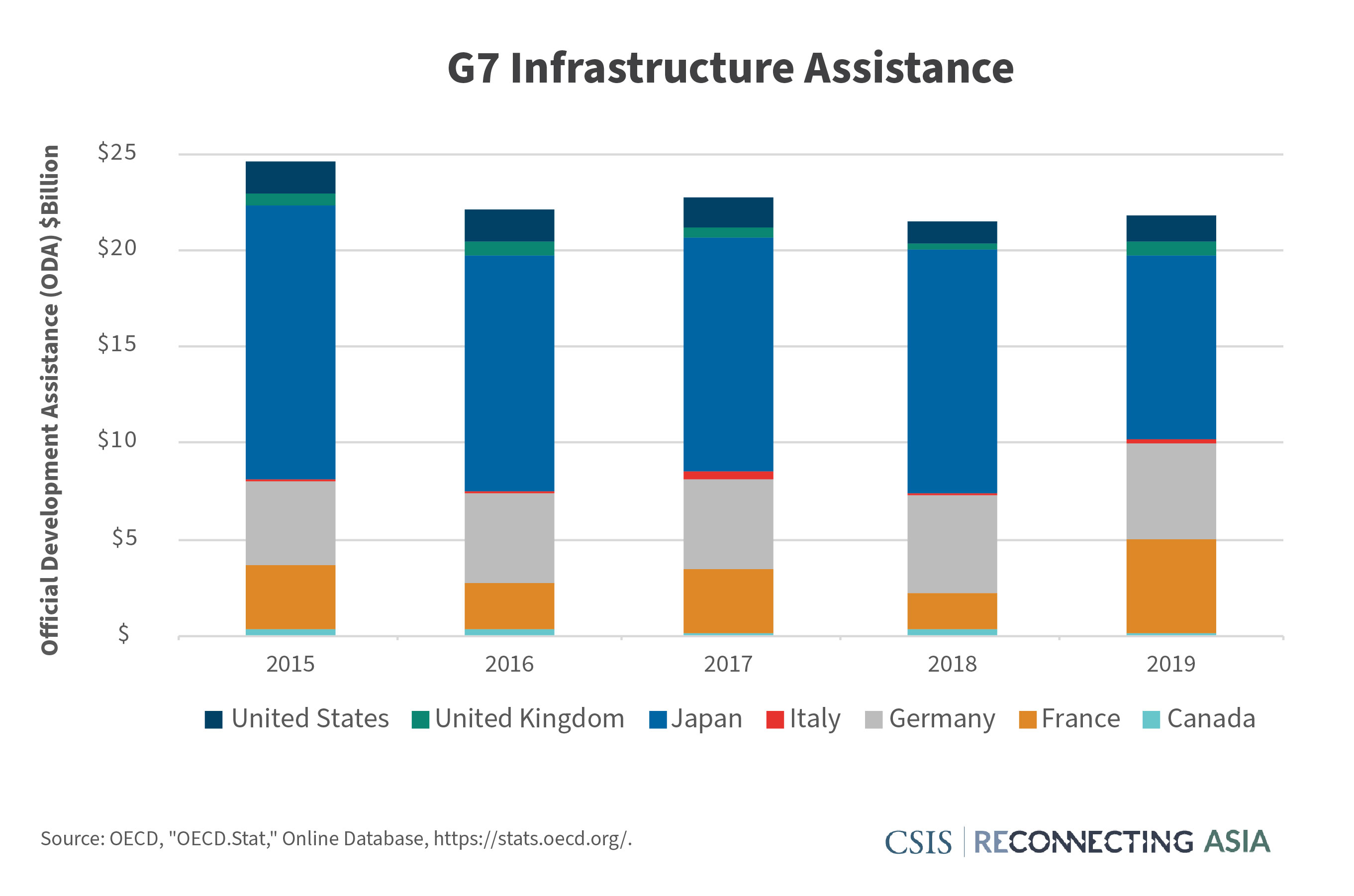 The private sector is where the untapped financial firepower resides. Pension funds, mutual funds, insurance companies, and sovereign wealth funds are all looking for reliable, long-term returns. Wealth and money managers now handle over $110 trillion, more than 16 times the U.S. federal budget in 2020. But only a small fraction of this vast amount is invested in infrastructure, and developing economies, in particular, have appeared too risky for many investors. According to World Bank data, during 2015-19, private sector investors in G7 countries put roughly $22 billion toward infrastructure projects in developing countries. For example, if G7 countries realized the International Finance Corporation’s mobilization target of 80 percent, current levels of assistance would unlock more than $200 billion over five years.

The challenge is that too often, especially in emerging markets, potential rewards are not commensurate with perceived risks. The list of overarching risks is long and varied: environmental, social, health, and safety risks; inflation, foreign exchange, and other macroeconomic risks; idiosyncratic decisionmaking, contract disputes, weak rule of law, and other legal and political risks. The complexity of projects should not be discounted, and there is an assortment of construction and operations risks. . . . As a result of all of these challenges, there is a shortage of “bankable” projects that can promise enough upside. Unlocking greater pools of U.S. private capital will require innovative ways, including multilateral or direct insurance products, to adjust the current risk-reward calculus.

Q3: What will the U.S. government need to do to make B3W a viable alternative to the BRI?

A3: The United States and its partners need to invest in a system for developing a sustainable pipeline of bankable projects. Sharing information and improving coordination between public and private sector stakeholders, as the G20’s Global Infrastructure Hub was created to do, is necessary but not sufficient. Preparing projects will require putting some public money on the table. In developing countries, project preparation expenses often approach five to ten percent of the total project cost. The European Bank for Reconstruction and Development’s Project Preparation Facility is one promising model to consider.

The United States should continue to support capacity-building efforts as well. Providing transaction assistance bilaterally and through multilateral institutions can help developing countries avoid unusual confidentiality clauses, inflated costs, and other risks. Modest investments in these activities can have outsized outcomes, which will help countries negotiate for better financial and legal terms that meet accepted international standards. For example, helping more countries implement life-cycle cost assessments will also enhance the competitiveness of the B3W offers.

The B3W needs to resonate with leaders in developing countries. Many will be eager to expand their options, and the B3W brand could carry prestige as a high-quality effort. But leaders will be cautious about tradeoffs that B3W projects might present—more public scrutiny, higher up-front costs, and longer timelines for project delivery. Competing against China’s approach, which often promises speed and low up-front costs, will require fashioning effective incentives.

Finally, the U.S. government needs a central coordinator for these efforts. The list of U.S. agencies with relevant expertise and capabilities is long, including not only State, Treasury, Commerce, and the U.S. Agency for International Development, but also Defense, Homeland Security, Transportation, and smaller specialized agencies, such as the U.S. Development Finance Corporation, the U.S. Export-Import Bank, and the Trade and Development Agency, among others. President Biden’s making the B3W a priority provides an opportunity to more effectively harness these capabilities.

Matthew P. Goodman is senior vice president for economics at the Center for Strategic and International Studies (CSIS) in Washington, D.C. Jonathan E. Hillman is a senior fellow with the CSIS Economics Program, director of the Reconnecting Asia Project, and author of The Emperor’s New Road.

Commentary is produced by the Center for Strategic and International Studies (CSIS), a private, tax-exempt institution focusing on international public policy issues. Its research is nonpartisan and nonproprietary. CSIS does not take specific policy positions. Accordingly, all views, positions, and conclusions expressed in this publication should be understood to be solely those of the author(s).

© 2021 by the Center for Strategic and International Studies. All rights reserved.

To read the full commentary from CSIS, please click here.