Blogs > In Last Eight Days, The Number of Global New COVID-19 Cases Over Past Fourteen Days Has Grown from Five to Six Million

In Last Eight Days, The Number of Global New COVID-19 Cases Over Past Fourteen Days Has Grown from Five to Six Million 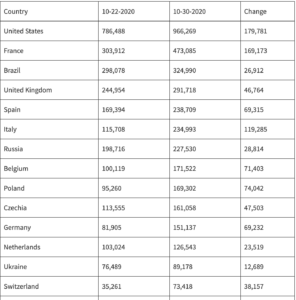 While the United States has the largest absolute increase in the last eight days for a single country, the vast majority of the increase flows from countries within the European Union. With the exception of Brazil and the United States, the rest of the countries in the chart are from Europe, most from the EU.

It is little wonder, then, that the EU and the UK, with dramatic growth in the number of new cases, are imposing renewed restrictions at least in many countries. While health care is handled by the individual countries within the the EU, the EU has been advocating better coordination and maintaining trade flows within the Community as countries come to grips with the current wave. See, e.g., Politico, October 30, 2020, EU leaders link arms for long fight against virus, https://www.politico.eu/article/eu-leaders-linkarms-for-long-fight-against-virus/ .

In the United States, the number of new cases is spiking again, with a new record recorded in the last day, with over 91,000 new cases and with predictions of new cases topping 100,000 each day in the next week or so.

Other parts of the world are not experiencing a second wave to the same extent, although much of the Americas remain at very high levels of new cases. Some major countries who have been seriously hit in recent months are seeing substantial reductions in new cases. India is the leading example — on October 22, the last 14 days showed 871,291 new cases; on October 30, for the last 14 days new cases were down to 718,383.

The top priority for many countries around the world is getting the COVID-19 pandemic under control. The costs in terms of human life and serious health problems are enormous. So too the costs to the global economy from taking the steps necessary to address the pandemic are enormous. How to address the pandemic and how to work internationally to secure a return to normalcy and a return to sustainable economic growth are the challenges for all governments and international organizations, including the WTO, WHO, IMF, World Bank and many others. The fact that the number of new cases is continuing to surge globally ten months after the start of global surveillance is obviously troubling and delays the return to normalcy. While some individual countries have gained control of the pandemic and others are making significant strides to reduce the number of new cases, “no one is safe until all are safe”. We have a long road to travel, and the western developed world is currently the major hot spot, struggling with the current extraordinary surge. We still are not in sight of a global peak and the rest of 2020 is likely to continue to stress global capabilities.