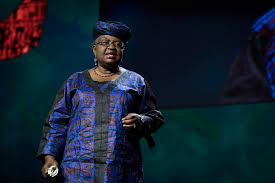 Special Session of the General Council at WTO appoints Dr. Ngozi Okonjo-Iweala as the seventh Director-General

The Special Session of the WTO General Council yesterday, February 15, 2021, which was called for the sole purpose of appointing the next Director-General, ran especially long, some four hours, as many WTO Members took to the floor (virtually) to congratulate Dr. Ngozi Okonjo-Iweala on her appointment as the next WTO Director-General. The appointment marks the first time the WTO or its predecessor the GATT has been headed by a woman, and the first time it has been headed by an African. At the end of the special meeting of the General Council, the next Director-General held a press conference for about an hour. During the press conference, Dr. Ngozi Okonjo-Iweala was asked how reporters should address her. Her answer was as Dr. Ngozi (Director-General Ngozi after February 28). I use “Dr. Ngozi” in the rest of this post.

While a normal term for the Director-General is four years, the WTO Members could have appointed Dr. Ngozi for the remainder of the four years from September 1, 2020-August 31, 2024 (i.e., the period from when Roberto Azevedo stepped down at the end of August), a four year period from March 1, 2021 – February 28, 2025 (i.e., the four year period from when she starts as Director-General), or could have brought the first period back in line with the four year cycles that would have prevailed if Roberto Azevedo had stayed til August 31, 2021. The WTO membership has set Dr. Ngozi’s first term at the longer option, March 1, 2021 – August 31, 2025.

The special meeting was not open to the public, and minutes from the meeting are not yet available. As the only agenda item was the appointment of the next Director-General, the process presumably consisted of the Chairman of the General Council, Amb. David Walker (New Zealand), with the concurrence of his facilitators in the selection process Amb. Dacio Castillo of Honduras (Chairman of the Dispute Settlement Body) and Amb. Harald Aspelund of Iceland (Chairman of the Trade Policy Review Body), putting forward the recommendation that Dr. Ngozi be appointed as the next Director-General. Without objection, Dr. Ngozi received the consensus support of the Members. Following that Dr. Ngozi provided a statement which both thanks the “troika” for their efforts during the selection process and reviewed her vision of the priorities for the WTO. Her full statement is embedded below (JOB/GC/250).

Some excerpts lay out the major priorities and shows the daunting challenges facing WTO Members and the new Director-General:

“1.9 * * * For the global economy to return to sustained growth, the global community will need to get a tight grip on the pandemic by intensifying cooperation to make equitable and affordable access to vaccines, therapeutics, and diagnostics a key plank of the recovery. With new COVID variants spreading rapidly all over, we must have a sense of urgency to getting control of the pandemic. The WTO can and must play a more forceful role in exercising its monitoring function and encouraging Members to minimise or remove export restrictions and prohibitions that hinder supply chains for medical goods and equipment. The International Trade Centre recently reported that up to 100 countries still maintain export restrictions and prohibitions.” (emphasis added)

“1.10. WTO Members have a further responsibility to reject vaccine nationalism and protectionism. They should rather intensify cooperation on promising new vaccines, therapeutics, and diagnostics. There should be a ‘third way’ to broaden access through facilitating technology transfer within the framework of multilateral rules, so as to encourage research and innovation while at the same time allowing licensing agreements that help scale up manufacturing of medical products.”

“1.11 * * * At MC12, the success of which is a top priority for us all, we must reach agreement on some pressing issues and elaborate on work programmes for others. Apart from the issues related to the pandemic, I hope that we would have finalised the fisheries subsidies negotiations, leaving MC12 as the venue to conclude on modalities for implementation.”

“1.12. Reform of the dispute settlement system, which has been a central element in guaranteeing security and predictability of the multilateral trading system, is of utmost importance to the membership. Some Members have criticised the way it functions and demanded reforms. It will be important to agree on the nature of these reforms, flesh them out, and develop a work programme for implementation that can be advanced at MC12. I believe that the set of recommendations proposed by Ambassador Walker could provide Members with a platform upon which to build so as to restore confidence in the dispute settlement system. A strengthened and robust system is in the interest of all Members, and as such, every effort should be made to improve it. We need a system that can garner the confidence of all, including small developing and least developed countries who have found it challenging to utilize.”

“1.13. The WTO rule book is outdated, and its rules lag behind those of several regional and bilateral trade agreements which are incorporating a lot of innovations. The rulebook must be updated to take account of 21st century realities such as e-commerce and the digital economy. The pandemic has heightened the importance and accelerated the role of e-commerce, which is expected to grow significantly in the coming years. E-commerce offers important opportunities for inclusivity of MSMEs and women in international trade, especially in developing countries. To make it possible for some developing and least developed countries to participate in the e-commerce negotiations, we must partner with governments and other organizations to bridge the digital divide. Success in the e-commerce negotiations could provide an impetus for reviving more broadly the negotiations on Trade in Services, a sector of increasing importance in the economy of most Members. Plurilateral initiatives have brought new energy in the Multilateral Trading System. Negotiating work on other joint statement initiatives – domestic regulation and investment facilitation – has continued fairly intensively despite the pandemic. Participants need to pursue their efforts to build support and attract interest from a significant part of the WTO membership, including from developing countries with a view to concluding at least the domestic regulation by MC12.”

“1.14. We should also work to ensure that the WTO best supports the green and circular economy and addresses more broadly the nexus between trade and climate change.”

“1.15. The WTO’s work in new or innovative areas does not mean that traditional topics such as agriculture are forgotten. Agriculture is particularly important for many developing and least developing countries. Improving market access for export products of interest to these countries is of paramount importance, as is dealing with trade distorting domestic support. The growing domestic support entitlements of Members must be addressed to level the playing field, so as to provide opportunities for small scale farmers. In addition, it is possible for an early agreement on removal of export restrictions including favorable consideration of the exemption of WFP humanitarian purchases. Likewise, we must also strengthen disciplines on industrial subsidies. In that regard, it would be important to ensure that subsidies granted by Members to their state-owned enterprises in certain situations do not distort the conditions of competition. The issue of Special and Differential Treatment (SDT) is a divisive one that undermines trust. However, the voluntary action of some developing country Members to not avail themselves of SDT in the future points a way forward, so does the Trade Facilitation Agreement which allowed for taking into account each Member’s particular development status.”

“1.16 * * * Transparency is the lifeblood of the system and every effort should be made to assist Members to meet their notification and transparency obligations. The development and streamlining of online tools, including the introduction of E-agendas is a step in the right direction. Some WTO rules and procedures also need to be revisited, including the procedures for appointing DGs. Regarding Ministerials, Article IV of the Marrakesh Agreement provides that ‘there shall be an MC composed of representatives of all Members which shall meet at least once every two years.’ In today’s fast changing, fast paced, but uncertain world, it may be opportune for members to review the frequency of Ministerials to assess whether yearly meetings would allow Members to better appraise the health of the MTS, surface problems, and together advance timely solutions. Furthermore, Members take decisions on the basis of consensus, and rightly so, since Article IX:1 of the Marrakesh Agreement provides that ‘the WTO shall continue the practice of decision-making by consensus followed under the GATT’ but Members must be vigilant that the quest for consensus does not create situations in which welfare enhancing innovations or approaches of benefit to the membership are frustrated.”

“1.17. The WTO Secretariat should be strengthened to enable it to provide cutting edge services to the membership in all relevant areas of WTO’s work, including implementation, monitoring, dispute settlement and negotiations. An important change will be to move away from the current siloed way of working to a more team and task-based approach. The Secretariat has to be fit for purpose to take account of the changing dynamics of the global economy and priorities of Members.”

During the press conference, Dr. Ngozi reviewed many of the above priorities but emphasized the critical importance of focusing first on the pandemic which means getting better control over export restraints and addressing the role the WTO can play in ensuring access to vaccines and other medical goods. Preparation for the 12th Ministerial Conference likely to take place near the end of 2021 is next and includes concluding the fisheries subsidies, progress on Joint Statement Initiatives (e.g., e-commerce, domestic regulations, etc.) and agreeing to a process for addressing the impasse on dispute settlement.

While yesterday’s Special Session was a time of celebration and expressions of support for the incoming Director-General, the ultimate success of the WTO under Dr. Ngozi’s leadership will depend on the ability of Members with very different interests to reach agreement on the road forward. Dr. Ngozi was selected in part for her promise to bring a fresh pair of eyes and push for a change in how the organization operates (“not business as usual”). But success is anything but assured. While Dr. Ngozi has focused on a lack of trust among Members, some have argued that it is really a lack of common purpose/objective among the membership that has resulted in an inability to move the organization forward. The move to bilateral and plurilateral agreements and Joint Statement Initiatives over the last dozen years is a reflection of the inability to get all Members on board initiatives to keep the organization moving forward. The twenty years that the fisheries subsidies negotiations have been dragging on and the inability of Members to focus on the objective of preserving fishing for future generations vs. minimizing the disciplines they accept reinforces the concern that the deep divisions among the membership doom multilateralism.

In a post from Saturday, I had urged Dr. Ngozi to think big in terms of her inner team and the four Deputies Director-General that will help her. With all of the critical issues before the WTO, Dr. Ngozi will need as deep and talented a team as she can assemble to permit extension of her reach to avoid the stagnation that has characterized the organization, assuming common ground can be found among the Members.

Dr. Ngozi’s appointment has given the WTO a shot in the arm and given many hope that a brighter future lies ahead. The WTO clearly needs major reforms to recapture the role envisioned in the 1980s and early 1990s when it was being negotiated and created. Let’s hope that Dr. Ngozi will help find the path that Members will agree to pursue to return the WTO to relevance.

Below are embedded a few of the statements from yesterday of Members (U.S., EU, China, India). 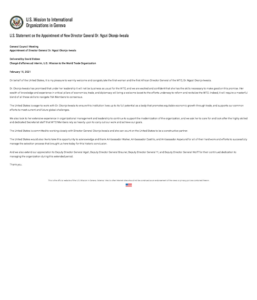 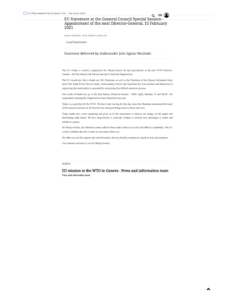 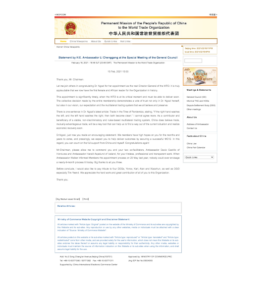 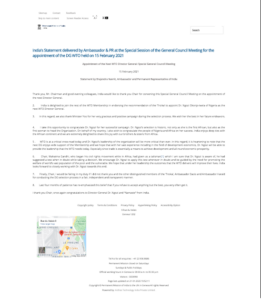