Blogs > This (Steel) Deal Is Getting Worse All the Time

This (Steel) Deal Is Getting Worse All the Time

Yesterday, the Biden administration announced an agreement with Japan to lift some of the U.S. “national security” tariffs on Japanese steel products that the Trump administration imposed in 2018 pursuant to Section 232 of the Trade Expansion Act of 1962. As with a similar European deal announced last Fall and implemented in January, the U.S.-Japan deal has been lauded as “ending” Trump’s steel tariffs and “mending ties with a major ally,” but a closer examination reveals it to share many, if not more, of the EU agreement’s shortcomings and to continue President Trump’s misguided and ineffectual approach to tariffs, international trade law, and geopolitics.

For starters, the new agreement doesn’t even touch the Section 232 tariffs on aluminum from Japan, nor does it actually eliminate Trump’s steel tariffs. Instead, the deal simply replaces the steel tariffs with a complex “tariff rate quota” (TRQ) system, under which 1.25 million metric tons (MMT) of Japanese steel — applied to 54 different product categories on a first‐​come, first served quarterly basis (with little period‐​to‐​period flexibility) — will be allowed to enter the United States tariff‐​free. Any Japanese imports above that amount will remain subject to the existing 25%, “national security” tariffs.

Given the quota amount and design, moreover, it’s quite likely that significant volumes of Japanese steel will still face — and American importers will thus keep paying — U.S. tariffs. Most obviously, the 1.25 MMT quota limit has been set well below pre‐​tariff volumes and even further below the amounts that would likely enter the U.S. today in the absence of any trade restrictions. According to my former colleagues at the law firm of White & Case, for example, Japanese steel imports “averaged approximately 2.03 MMT during the pre‐​duty 2015–2017 period” — a period that was experiencing far less industrial demand than today. Thus, the new TRQ level is, at best, set at a paltry 61% of current U.S. market demand and probably much lower than that. As we explained with the EU agreement, the U.S.-Japan deal will therefore keep U.S. steel prices high, leaving steel‐​consuming American manufacturers at a significant disadvantage versus their global competitors. Indeed, the EU deal has now been in place several weeks, and U.S.hot-rolled steel prices are still far higher than prices in Europe and elsewhere: 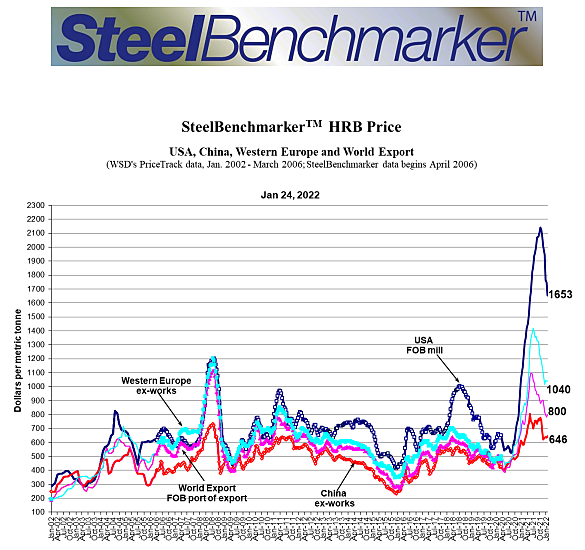 White & Case further notes that the Japan agreement is actually more restrictive than the EU deal because it likely will count Japanese steel currently excluded from the Section 232 tariffs against the new TRQ limits. (The EU deal expressly exempted these imports from the TRQs, meaning more duty‐​free European imports overall.) The tariff‐​supporting Steel Manufacturers Association naturally celebrated this provision, noting that 550,000 metric tons of steel products — almost half of the new TRQ — entered under an exclusion last year. Once you factor in this already‐​excluded steel, the Japan deal’s tariff liberalization — and thus its effect on U.S. prices and relief for U.S. manufacturers — becomes even more modest.

The quota’s design, which essentially mirrors the EU agreement, will further limit this tariff relief. As we discussed in November, for example, “TRQs administered in this fashion are sure to introduce distortions, for example, large U.S. importers stockpiling early in a quarter and paying higher prices to do so.” According to the Coalition of American Metal Manufacturers, this very problem has already emerged with the U.S.-EU agreement: “some steel products’ quota filled up for the year in the first two weeks of January,” and so they now worry that the Japan deal will “lead to market manipulations and allow for gaming of the system that puts this country’s smallest manufacturers at an even further disadvantage.” Other concerns with the EU system, such as its “melted and poured” rule for qualifying products, are also present in the new Japan agreement.

So, for those who support free markets and the removal of U.S. trade barriers, the Biden administration basically took a bad trade deal and made it even worse.

Finally, the new Japan agreement once again shows the emptiness of the United States’ “national security” justifications for these tariffs — the term isn’t even mentioned in the official documentation — and of the Biden campaign’s promise to improve U.S. foreign policy and heal Trump‐​era tensions with major allies. As has been widely reported, the Japanese government sought the Section 232 tariffs’ complete removal, which President Biden could achieve with the stroke of a pen. They still don’t seem to be thrilled with this deal, but apparently figure that a little liberalization — and some sweet quota rents for Japanese steelmakers — is better than nothing. If fixing obvious and absurd Trump‐​era wrongs to critical regional allies were really more important to the White House than placating U.S. steel companies and unions, the president would have removed the tariffs entirely. He didn’t.

So much for national security.

Scott Lincicome is the director of general economics and Cato’s Herbert A. Stiefel Center for Trade Policy Studies.

To read the full commentary from the CATO Institute, please click here.