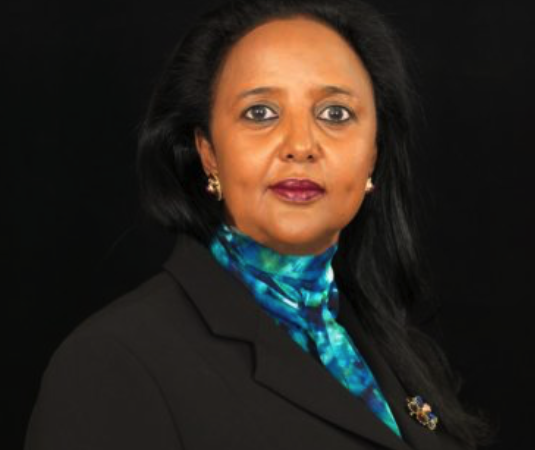 On Thursday, August 6th, WITA hosted a webinar conversation with WTO Director-General Candidate H.E. Ambassador Amina Mohamed. She was also the first woman to chair the African Group at the WTO and advanced African interests successfully at the WTO and in U.N. bodies. During this webinar, she discusses her views on the importance of the WTO and what attributes she could bring to optimize the WTO’s effectiveness as an international trade organization.

Ambassador Amina Mohamed was Kenya’s Permanent Representative and Ambassador to the WTO. She was the first woman to chair the General Council in 2005 and the Dispute Settlement Body.

As General Council Chair, she brokered an agreement of major importance to developing countries, an amendment to the TRIPS Agreement to assist countries with insufficient manufacturing capacities in the production of essential drugs to treat diseases such as HIV/Aids and Tuberculosis. She was also the first woman to chair the African Group at the WTO and advanced African interests successfully at the WTO and in UN bodies.

Ambassador Mohamed was the Permanent Secretary of the Ministry of Justice, National Cohesion and Constitutional Affairs from 2008 to – 2011. She was in charge of the constitutional review process that culminated in the promulgation of the 2010 Constitution of Kenya. She managed far reaching legal and Institutional reforms ever realized in Kenya. She also chaired the Annual Multi-Stakeholder Ethics and Conference. In all these roles, she has promoted development and diversity, particularly the educational, social and economic empowerment of women.

She was Assistant Secretary-General of the United Nations and Deputy Executive Director of UNEP from 2011 to 2013 and helped advance its agenda to address contemporary challenges facing the organization. Given her trade background, she was particularly interested in the interface between trade and environment, believing in their complementarity and mutual supportiveness.

As Kenya’s Foreign Affairs and International Trade Minister from 2013 to 2018, she chaired the 2015 WTO Ministerial Conference in Nairobi. As the first woman and first African to chair the WTO’s highest forum, she played a crucial role in reaching positive outcomes, especially the decision to eliminate export subsidies in agriculture. This was the first fulfilment of a UN Sustainable Development Goal, under SDG2-Zero Hunger.

Amina is an Advocate of the High Court of Kenya. She obtained her Undergraduate and Masters Degree in Law from Taras Shevchenko University in Kiev, Ukraine, attended the Kenya School of Law and obtained a Postgraduate Diploma in International Relations as a Chevening Fellow at the Oxford University, United Kingdom. She is a UNITAR Fellow, is fluent in English, Kiswahili, and Russian, and has basic knowledge of French.