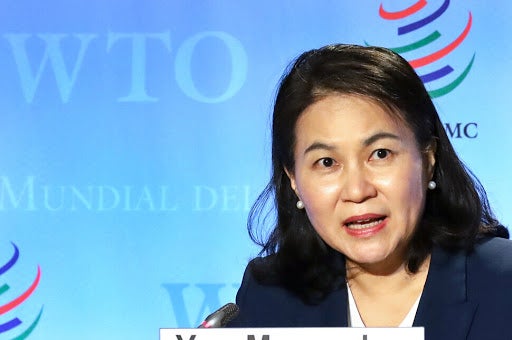 Director General The Future Of The World Trade Organization WTO

H.E. Yoo Myung-hee, Trade Minister, Republic of Korea and Candidate for the post of Director General of the WTO

H.E. Yoo Myung-hee is the first female Trade Minister for the Republic of Korea, and has been an innovator, negotiator, strategist and pioneer in her 25 year career in trade. She has devoted her career to progress in the multilateral trade arena from the early days in 1995 when she took charge of WTO affairs in the Korean Ministry of Trade Industry and Energy, through her role as Korea’s key FTA strategist to, more recently, negotiator of the Regional Comprehensive Economic Partnership (RCEP), the Korea-China FTA and the critical Korea-U.S. (KORUS) FTA renegotiation, among other trade initiatives.

Minister Yoo’s belief in the importance of the multilateral system and its constant renewal derives from Korea’s position as a major beneficiary of the open trading system represented by the GATT and WTO. Her life in Korea has been defined by Korea’s increasing prosperity and growth in the multilateral trading world. She personally knows that development can happen in this framework and has first-hand experience in how to effectuate mutually beneficial change and development.

There is no question that the world trading system faces great challenges at this time of pandemic and crisis of confidence in multilateral systems. In her capacity as Trade Minister, she has always been passionate in voicing her support for the multilateral trade system which must be based on international cooperation and consensus in the WTO,  while recognizing the need for WTO reforms to update the rules including in emerging issues and an early restoration of the dispute settlement system. The difficulties are real and they must be addressed openly by the WTO as an institution and by its Members.

She is a skillful negotiator with deep knowledge and insights into the details of various areas of trade agreements, but more importantly, she has flourished in her role as a catalyst who brings together diverse views of the parties involved to derive win-win solutions. In doing so throughout her career, she has worked with countries spanning all levels of development, in various WTO and FTA negotiation settings as well as through her work experience in the APEC Secretariat (2010 to 2014) and the Korean Embassy in China (2007 to 2010). The multilateral system must work for everyone.

Minister Yoo’s ability to reach across divides and help achieve consensus has been crucial in developing critical support for trade initiatives within Korea. She has worked constructively and successfully with domestic stakeholders with a diversity of views, including those who benefit directly from open trade as well as those who are vulnerable to trade. She always focuses on bridging gaps to reach agreements that maximize the overall welfare of the parties involved. She is familiar with the domestic political pressures and needs that all Members face.

Minister Yoo is a strategist, laying out long-term visions to be followed, and at the same time when faced with unexpected hurdles, able to proactively develop and pursue practical doables and deliverables that are meaningful under the circumstances. She has also proven her outstanding skills in leading and managing large, complex organizations as Trade Minister during a period of high ambitions and efforts in Korean trade policy. These skills are needed now. The WTO is at a critical juncture. Minister Yoo will bring her experience and skills to the Membership and help drive reforms in the institution including in the approaches and extent of negotiations as well as optimizing and focusing Secretariat resources on the important tasks at hand.

She received her M.A. in Public Policy from Seoul National University in Korea and her Juris Doctorate from Vanderbilt University Law School in the US, and was admitted to the New York State Bar in May 2003. She is married with two children.