Event videos > WITA Webinar: COVID-19 and USMCA – The Pandemic and Implementation of the US-Mexico-Canada Agreement 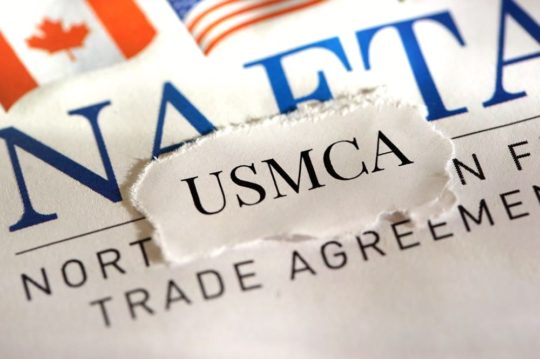 WITA Webinar: COVID-19 and USMCA – The Pandemic and Implementation of the US-Mexico-Canada Agreement

On Thursday, June 4th, WITA hosted a webinar examining critical issues ahead of the July 1st implementation date, and the impact of COVID-19 on the ability of companies to achieve their implementation goals in the midst of the pandemic.

Jamieson Greer, Partner at King & Spalding and former Chief of Staff in the Office of the U.S. Trade Representative

The webinar began with Moderator Kellie Meiman Hock asking Jamieson Greer about the likelihood of meeting the July 1st deadline for the implementation of USMCA. He compared this process to NAFTA, when the uniform regulations did not come out until a year the official implementation. Since we have already seen these regulations, Jamieson expressed optimism about the pace of the implementation process. He elaborated on the details of the labor value content rules for automotive industries and other labor department regulations.

Governor Matt Blunt then responded to Kellie’s question regarding the transition from NAFTA to USMCA regulations within the automotive sector, calling the July 1st deadline ambitious but doable. He, like Jamieson, was pleased that the uniform regulations came out, but saw some initial areas for improvement: weight averaging for light and heavy duty trucks would make industry compliance easier, and an administration-granted period of duty deferral would help companies get their documents organized in order to demonstrate compliance.

Kellie moved on to the topic of Mexico’s timeline for compliance, asking Kenneth Smith Ramos about how Mexican factories had been faring during the COVID-19 pandemic. He cited the disconnect between the North American countries’ list of essential industries as an ongoing issue contributing to supply chain disruption, but asserted Mexico’s overall preparedness to implement USMCA at the regulatory level.

The panelists also discussed the potential weaknesses of the rapid response mechanism within the agreement and the overall production levels of Mexican suppliers, followed by a Q&A session that addressed viewer questions about the cost of compliance for auto companies, the process of selecting panelists, and how the USMCA ties in with sustainability practices in trade.