Event videos > WITA Webinar: What is Priority Number 1? Inflation, Jobs, or Trade Policy – a Look at Tariff and Trade Policy 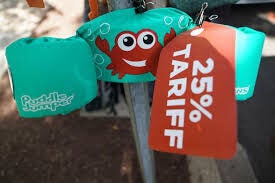 WITA Webinar: What is Priority Number 1? Inflation, Jobs, or Trade Policy – a Look at Tariff and Trade Policy

On Thursday, Sept 1, 2022 WITA hosted a discussion on inflation, jobs, and trade policy.

He has served as a consultant to international organizations including the Organization for Economic Cooperation and Development and the World Bank. Alan received his PhD from Cornell University.

Ed Gresser is Vice President and Director for Trade and Global Markets at PPI. Ed returns to PPI after working for the think tank from 2001-2011. He most recently served as the Assistant U.S. Trade Representative for Trade Policy and Economics at the Office of the United States Trade Representative (USTR). In this position, he led USTR’s economic research unit from 2015-2021, and chaired the 21-agency Trade Policy Staff Committee.

Ed began his career on Capitol Hill before serving USTR as Policy Advisor to USTR Charlene Barshefsky from 1998 to 2001. He then led PPI’s Trade and Global Markets Project from 2001 to 2011. After PPI, he co-founded and directed the independent think tank ProgressiveEconomy until rejoining USTR in 2015. In 2013, the Washington International Trade Association presented him with its Lighthouse Award, awarded annually to an individual or group for significant contributions to trade policy.

Ed is the author of Freedom from Want: American Liberalism and the Global Economy (2007). He has published in a variety of journals and newspapers, and his research has been cited by leading academics and international organizations including the WTO, World Bank, and International Monetary Fund. He is a graduate of Stanford University and holds a Master’s Degree in International Affairs from Columbia Universities and a certificate from the Averell Harriman Institute for Advanced Study of the Soviet Union.

Michael Stumo is the Chief Executive Officer of the Coalition for a Prosperous America (CPA). CPA is a national bipartisan organization including agriculture, manufacturing and organized labor. CPA works for policies to balance U.S. trade, create jobs and achieve broadly shared prosperity. CPA represents the interests of over 4.1 million households through its association and company members.

Michael educates political, media and business leaders on issues including trade imbalances, trade enforcement, tax reform, agricultural trade, manufacturing policy, currency misalignment and related issues. He appears on American and international television (CNBC, Japan NHK World) and radio programs (BBC World Service), and speaks before domestic and international audiences. His articles on trade, tax and economics are published frequently in publications like The Hill, Inside Sources, and Marketwatch among many other US publications.

Michael was a lawyer and litigator at Brignole, Bush and Lewis (Hartford CT) and Domina Law (Omaha NE). He was general counsel for the Organization for Competitive Markets focusing upon agriculture and antitrust.

Nasim D. Fussell is a trade attorney in Holland & Knight’s Washington, D.C., office, where she is a member of the Public Policy & Regulation Group. Ms. Fussell has a wealth of trade legislation and negotiation experience, having served in numerous trade-related roles in the public and private sectors.

In addition, Ms. Fussell served as trade counsel for the House Committee on Ways and Means, where she served under Chairmen Kevin Brady (R-Texas), Paul Ryan (R-Wisc.), and Dave Camp (D-Mich.). She worked on significant legislative achievements, including the Trade Facilitation and Trade Enforcement Act of 2015, Bipartisan Congressional Trade Priorities and Accountability Act of 2015, Trade Adjustment Assistance Reauthorization Act of 2015, Trade Preferences Extension Act of 2015 and American Manufacturing Competitiveness Act of 2016.

Ms. Fussell also worked on a wide range of issues during her time in both chambers, including digital trade, digital services taxes, tariff reform, e-commerce, trade and technology, forced labor and trade in agriculture, among others.

Prior to joining government, Ms. Fussell served in a variety of trade and public policy roles in the private sector for a major automobile manufacturer, a cross-sectoral trade association and a global technology company. She started her legal career as a law clerk in the U.S. Department of Commerce’s Office of the Chief Counsel for Import Administration.