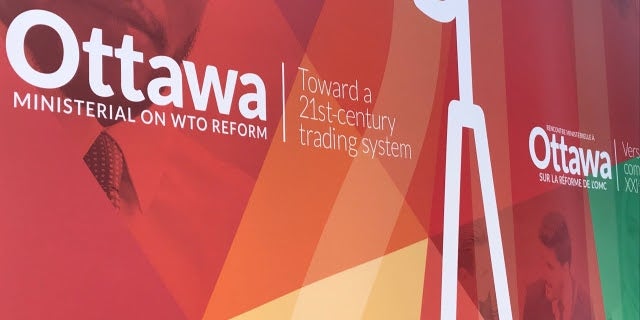 Ottawa Group Ambassadors on the WTO

On December 11, WITA welcomed members of the Ottawa Group to discuss key issues on their WTO agenda, including their proposal for a WTO Trade and Health Initiative to strengthen supply chains and ensure the free flow of medicines and medical supplies, their work on WTO reform, and ongoing negotiations on e-commerce and fisheries.

The Ottawa Group includes several key U.S. allies with whom the incoming Biden Administration can expect to work on these and other critical trade issues in the years to come.

Mr. de Boer joined Global Affairs Canada in 2005 and has held various positions in the department, including in the Investment Trade Policy and North America Trade Policy Divisions. In 2006, he was named the Director of the Softwood Lumber Division. From 2008 to 2010, he served as the Director of the Oceans and Environmental Law Division and as Lead Counsel for Canada’s international climate change negotiations. In 2010, he joined Environment Canada as the Deputy Chief Negotiator for climate change and the Director General responsible for Canada’s international climate change negotiations and partnerships. Mr. de Boer returned to the department in 2013 as the Director General of the Trade Controls Bureau. In 2015, he was appointed Ambassador to Poland and in 2016, Ambassador to Belarus. Prior to joining the public service, he worked for the Government of Ontario.

H.E. Didier Chambovey is the head of the Swiss Permanent Mission to the WTO and EFTA in Geneva, appointed in September 2016.

Previously, he was Federal Council Ambassador and Delegate for Trade Agreements, and head of the World Trade Division in the Foreign Economic Affairs Directorate. From 2006 to 2011, he was Deputy Secretary-General of the European Free Trade Association (EFTA). From 1998 to 2006 he served as deputy head of the Swiss Permanent Mission to the WTO and EFTA in Geneva.

Before his appointment as section head in the WTO Division in 1993, he worked in the field of economic cooperation with the countries of Central and Eastern Europe. Didier Chambovey joined the Federal Office for Foreign Economic Affairs (FOFEA) in 1987 as scientific adviser in the GATT Division.

Ambassador Tan joined the Ministry of Foreign Affairs in 1990, and served as Singapore’s Permanent Representative to ASEAN from August 2013 to January 2019, and Ambassador to the Arab Republic of Egypt, with concurrent accreditation to Libya, from July 2009 to July 2013. He was also concurrently accredited as Ambassador to the State of Kuwait until October 2012. Ambassador Tan’s other overseas postings included Embassy of the Republic of Singapore to Thailand in Bangkok, where he was Deputy Chief of Mission/Counsellor from 1999 to 2003; and two stints in Embassy of the Republic of Singapore to the Arab Republic of Egypt in Cairo as Deputy Chief of Mission from 2003 to 2005, and First Secretary from 1992 to 1995.

Ambassador Tan graduated from the National University of Singapore and did post-graduate studies at the University of London, School of Oriental and African Studies (SOAS), under the Raffles/Chevening Scholarship. He was awarded the Public Administration Medal (Silver) in 2011 and the Long Service Medal in 2013. Ambassador Tan is married to Mrs. Kayo Suzuki-Tan and they have two daughters.

H.E. Kazuyuki Yamazaki is Japan’s Ambassador and Permanent Representative to the International Organizations in Geneva, appointed in November, 2019.

Mr. Yamazaki has a B.A. in economics from Hitotsubashi University in Tokyo (1983), and attended a diplomatic training programme of the Ministry of Foreign Affairs of Japan at Swarthmore College, Pennsylvania, United States (1984-1986). He is married with two children.

Ambassador Rufus Yerxa is the President of the National Foreign Trade Council (NFTC) since May of 2016. As president, he oversees NFTC’s efforts in favor of a more open, rules-based world economy, focusing on key issues to U.S. competitiveness such as international trade and tax policy, economic sanctions and export finance.

Previously, Ken served as Senior Director for Global Government Affairs for AstraZeneca. Prior to joining AstraZeneca, Ken served as Senior Vice President and COO at the Washington, DC consulting firm of Fontheim International. Ken started his career on the staff of U.S. Senator John D. (Jay) Rockefeller IV, where he served as the Senator’s chief advisor for international trade, tax, foreign policy, and national security.