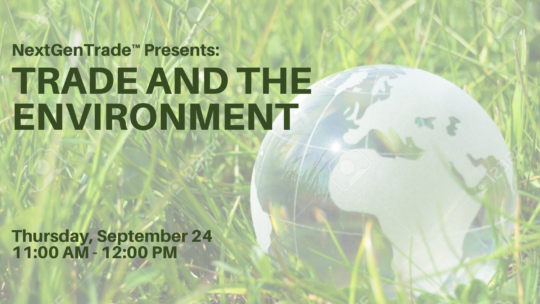 On Thursday, September 24th, WITA kicked off the NextGenTrade® project Trade & the Environment series looking at how existing trade agreements address environmental issues, and how future trade negotiations and agreements can be used to address climate change.

Jennifer Haverkamp, Director of the University of Michigan Graham Sustainability Institute, is an internationally-recognized expert on climate change, international trade, and global environmental policy and negotiations.

As director, she is charged with facilitating sustainability-focused collaborations between faculty and students from many disciplines across campus with external stakeholders including communities, non-governmental organizations, government agencies, foundations, professional organizations, and the private sector. Under her leadership, the Graham Sustainability Institute works to bring together the world-class expertise of U-M faculty and students with the knowledge and needs of these off-campus partners to solve sustainability challenges on all scales, from the local to the global.

Haverkamp is also a Professor from Practice at Michigan Law School, teaching courses on international environmental law and trade and sustainability law, and a Professor of Practice at the Gerald R. Ford School of Public Policy. In February 2019 President Schlissel named her co-chair of the U-M President’s Commission on Carbon Neutrality, which is charged with developing a timeline and pathway for achieving carbon neutrality across all three campuses.

Before joining U-M in October 2018, Haverkamp served as a visiting professor of practice and distinguished practitioner in residence at Cornell Law School, as well as executive in residence at the David R. Atkinson Center for a Sustainable Future, also at Cornell University.

Prior to that, she served as special representative for environment and water resources, with personal rank of ambassador, in the U.S. Department of State. In 2016, she led U.S. climate negotiators to a successful international agreement under the Montreal Protocol to decrease global use of hydrofluorocarbons, a potent greenhouse gas. She also facilitated a successful agreement by the International Civil Aviation Organization to adopt the first-ever global market-based measure to address aviation carbon emissions. In this role, Haverkamp also oversaw diplomatic engagement in transboundary water management, water conflicts and global water governance.

She has been a lecturer teaching international trade and sustainable development law at George Washington University and teaching environmental law and policy at Johns Hopkins University.

Haverkamp earned a law degree from Yale Law School, was a Rhodes Scholar earning a master’s degree in politics and philosophy at Oxford University and majored in biology at The College of Wooster (on whose board of trustees she has served for many years). She also has served on numerous nonprofit boards and advisory councils, including the boards of the Verified Carbon Standard Association and the American Bird Conservancy as well as on USTR’s Trade and Environment Policy Advisory Committee.

David Shark has worked in trade policy and negotiations for over 40 years. Most recently, he served from October 2013 through September 2017 as Deputy Director-General of the WTO where his responsibilities included agriculture, trade and environment, technical barriers to trade and accessions. He also served as Chair of the WTO’s MC 1o and MC 11 Task Forces which were charged with logistical preparations for the conference.

Prior to his service at the WTO he spent over 37 years in the U.S. federal government, focused on trade, including 33 years with the Office of the United States Trade Representative. From 2000 through September 2017 he served under four consecutive U.S. Ambassadors as Deputy Chief of Mission and Deputy Permanent Representative to the WTO. In that role he held broad responsibilities covering the full gamut of issues before the WTO. He has also served at the U.S. Mission to the WTO during the Uruguay Round negotiations where he participated in negotiations and other work on the agreement creating the WTO, the Dispute Settlement Understanding, TRIMs/Investment, Antidumping, Subsidies, Customs Valuation, Government Procurement, Technical Barriers to Trade, Import Licensing, Trade and Environment, and Trade and Worker Rights.

Before joining USTR, he worked at the Commerce Department, where he was deeply involved in the Tokyo Round of Trade Negotiations, and the Labor Department where he worked on petitions for Trade Adjustment Assistance.

Sarah Stewart, is the Executive Director of the Silverado Policy Accelerator, a non-profit focused on advancing American prosperity and global leadership in the 21st century and beyond. Prior to Silverado, Ms. Stewart led the public policy efforts at Amazon on international trade and export controls matters.

Ms. Stewart worked for the Office of the United States Trade Representative from 2013 – 2018, with her most recent position being the Deputy Assistant United States Trade Representative for Environment and Natural Resources. During her time at USTR, Ms. Stewart was the lead environment chapter negotiator for the US-Mexico-Canada Agreement and the Transatlantic Trade and Investment Partnership (TTIP) negotiations with the European Union. Prior to that, Ms. Stewart led USTR’s efforts on trade and environment issues in the Western Hemisphere, focusing heavily on implementation of the Environment Chapter and Forestry Annex of the US – Peru Trade Promotion Agreement.

Prior to joining USTR, Ms. Stewart served in different legal and policy roles at The Humane Society of the United States and Humane Society International, including spearheading a first ever international legal group. Ms. Stewart began her career as a trade remedy lawyer at the Law Offices of Stewart and Stewart, where she worked for six years.

Ms. Stewart holds a Bachelor of Arts from Lehigh University and a Juris Doctor from the American University College of Law. She lives in Maryland with her husband and two kids.

Alexander von Bismarck, is Executive Director of the Environmental Investigation Agency, Inc. He has been working on trade and environment issues around the globe for two decades. He holds a Masters from the London School of Economics in Environment and Development and a Bachelors degree in Environment and Public Policy from Harvard University. Alexander has worked across most of EIA’s campaigns and investigations, including protecting forests from illegal logging, stopping smuggling of global warming and ozone depleting chemicals, and fighting wildlife trafficking.

Before EIA, he worked on research on climate change and marine ecology, including with the New England Aquarium Edgerton Research Lab to study the ecosystem of Lake Victoria in East Africa and the Harvard School of Public Health to chronicle ecological and human health impacts on climate change. Alexander personally led investigations into illegal logging and associated trade in over twenty countries throughout the world, illustrating how wook illegally logged from the world’s most valuable remaining froests ends up on retail shelves in the United States and other consuming countries.

Von Bismarck testified about these investigations to the House Natural Resources Committee in October 2007, which was considering legislation to prohibit the import of illegally logged wood into the United States. The law, which was the first of its kind in the world, was passed in the United States in May 2008. EIA is now leading an international effort to level the playing field for wood trade to allow developing countries to manage their forests sustainably. Alexander also led multiple successful campaigns to reform the United Nation’s Montreal Protocol to be a climate protection treaty, leading to a an accelerated phase out and an amendment of the treaty that are expected to prevent about 100 billion CO2 equivalent tons of emissions.

Kenneth Levinson is the Executive Director of the Washington International Trade Association (WITA). WITA is Washington’s largest non-profit, non-partisan organization dedicated to providing a neutral forum in the U.S. capital for the open and robust discussion of international trade policy and economic issues. WITA has over 3,500 members, and more than 170 corporate sponsors and group memberships.