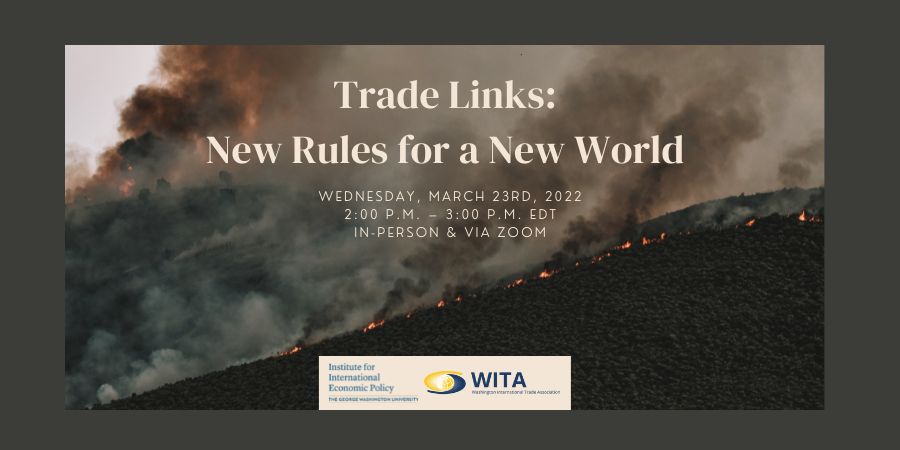 On Wednesday, March 23, WITA partnered with the Institute for International Economic Policy for a hybrid event. Former Congressman James Bacchus discussed that the World Trade Organization is undergoing an existential crisis. He highlighted that this global organization can survive and will continue to succeed but only if the trade links among WTO members are revitalized and reimagined. He explained how to bring the WTO into the twenty-first century, exploring the ways it can be utilized to combat future pandemics and climate change and advance sustainable development, all while continuing to foster free trade.

James Bacchus, Distinguished University Professor of Global Affairs, Director of the Center for Global Economic and Environmental Opportunity of the University of Central Florida, founding judge and twice Chairman of the Appellate Body of the World Trade Organization

Alyssa Ayres is the Dean of the Elliott School of International Affairs at George Washington University. Her work focuses primarily on India’s role in the world and on U.S. relations with South Asia in the larger Indo-Pacific. Before joining the Elliott School, she was a Senior Fellow at the Council on Foreign Relations, and Deputy Assistant Secretary of State for South Asia under the Obama administration. She holds a Ph.D. in South Asian Languages and Civilizations from the University of Chicago.

James Bacchus is a Distinguished University Professor of Global Affairs and Director of the Center for Global Economic and Environmental Opportunity of the University of Central Florida. He was a founding judge and was twice Chairman – the chief judge – of the Appellate Body of the World Trade Organization. He is a former Member of the Congress of the United States, from Florida, and a former US trade negotiator.

He serves on the United States Leadership Council of the United Nations Sustainable Development Solutions Network, served on the High-Level Advisory Panel to the Conference of Parties of the United Nations Framework Convention on Climate Change, chaired the global council on governance for sustainability of the World Economic Forum, and chaired the Commission on Trade and Investment Policy of the International Chamber of Commerce.

Professor Bacchus is the author of Trade and Freedom (London: Cameron May, 2004); The Willing World: Shaping and Sharing a Sustainable Global Prosperity (London: Cambridge University Press, 2018), named one of the “Best Books of the Year” by the Financial Times of London; and, with co-author Inu Manak, The Development Dimension: Special and Differential Treatment in Trade (London: Routledge Press, 2021). His new book, Trade Links: New Rules for a New World, will be published by Cambridge University Press in early 2022.

His area of research is macroeconomics and international economics. He has had two stints in public service. He served as a Member of the White House Council of Economic Advisors from 2015-2017. Earlier, he served on the staff of the CEA as a Senior Economist for International Economics and then as the Chief Economist. He also spent 3 years as the Director of the Hamilton Project at the Brookings Institution. Jay is also a Faculty Research Fellow at the NBER and Non-Resident Senior Fellow in Economic Studies at Brookings.

Prior to joining the faculty at George Washington, Jay taught at Georgetown and Dartmouth and was a visiting scholar at the IMF. He received his Ph.D. in economics from the University of California at Berkeley, an M.A. from the Fletcher School at Tufts, and a B.A. from Yale University.