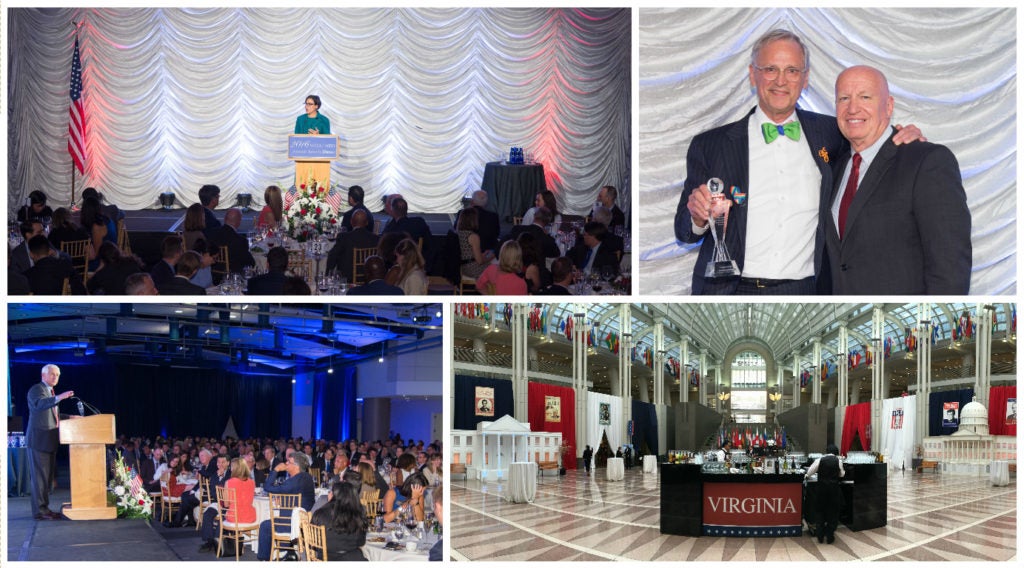 The evening began with an embassy sponsored cocktail reception which featured national products of wine, beer and spirits from around the world. Guests mingled in the Atrium of the Ronald Reagan Building and International Trade Center for the pre-cocktail reception. Replica models of the White House, Capital Building and vintage political campaign posters set the tone of a political convention themed event, in light of it being a U.S. election year.

After the cocktail reception, the seated dinner began with opening remarks by WITA Executive Director, Kenneth Levinson, and WITA Board President, Steve Lamar. Next, Nicole Venable, WITF Board member and Master of Ceremonies, came to the stage and gave a humorous introduction to the “WITA Prom Superlatives.” To watch this portion of the ceremony, please click here.

Steve Clemons began the awards portion of the evening with the presentation of the Global Leadership Award to Secretary Penny Pritzker. He highlighted the Secretary’s numerous contributions to trade and economic policy since her tenure as Secretary of Commerce. Following his introduction, the Secretary gave a passionate speech on the current state of trade policy to the nearly 600 event guests. In her remarks, the Secretary noted, “this is a time for American leadership. No matter our politics, we as Americans cannot let our differences, our fear of change, our anxiety over the future stop us from engaging with the world.” To watch Secretary Pritzker’s speech, please click here.

The evening continued with the presentation of the Congressional Leadership Awards by Congressman Kevin Brady, Chairman of the House Ways and Means Committee. During his presentation, Congressman Brady likened the importance of free trade to personal freedom of choice pronouncing, “The beauty of free trade is that it insists that power lies with American consumers.” After finishing his remarks on trade, Congressman Brady invited his colleague Congressman Blumenauer to the stage and presented him the Congressional Leadership Award. The Oregon representative expressed his gratitude for the recognition and echoed Secretary Pritzker’s words that, “… we have allowed trade to become a proxy for people’s general economic insecurity.” Congressman Blumenauer expressed how imperative it is to deal with the lack of public information on trade and that the trade community must highlight the unnoticed benefits of trade. Additionally, he emphasized the need for strong support for those that are adversely affected by trade and other changes to the economy in regards to job losses. To watch Congressman Brady and Blumenauer’s speeches, please click here.

Following Congressman Blumenauer, Congressman Brady presented the second Congressional Leadership Award to Congressman Dave Reichert. Congressman Reichert expressed gratitude for the award, and shared three personal experiences from his time as a police officer in Washington State. All three anecdotes served as past life experiences in which Mr. Reichert was able to overcome adversity and achieve positive results – which he likened to the process of passing the Trans- Pacific Partnership (TPP) in Congress. He stressed that “TPP is not dead,” receiving tumultuous applause from the crowd.  To watch Congressman Reichert’s speech, please click here.

Following the awards, Nicole Venable returned to the stage to introduce Carolyn Brehm, Vice-President of Global Government Relations at The Procter & Gamble Company. Ms. Brehm’s remarks were dedicated to her former colleague Nathan Graham, a member of the Washington Trade community, who passed away during a business trip to China in December 2015.

Following Carolyn Brehm’s tribute, Nicole Venable introduced the perennial “Prom King and Queen,” WITF board members Bill Lane, former Senior Director Global Government and Corporate Affairs at Caterpillar Inc., and Sarah Thorn, Senior Director of the Global Government Affairs at Walmart. Bill and Sarah proceeded to present the 2016 Lighthouse Award. This award is a special, surprise recognition given by the Foundation to outstanding members of the trade policy community each year. After a set of clues, Sarah announced that Bill Lane himself and William Reinsch, former President of the National Foreign Trade Council, had been chosen as this year’s recipients.

The night concluded with remarks by Nicole Venable and the announcement of the trade prize winners. Prizes including a collection of six DVDs and six day passes for Disney properties in Florida provided by The Walt Disney Company, assorted spirits from DISCUS and the Striped Pig Distillery, a Swash from Whirlpool, a Surface Pro 4 from Microsoft, as well as, replicas of vintage political posters donated by WITF. This year’s annual awards dinner was WITA’s largest yet; featuring many new sponsors, in addition to Government and Embassy participants, to help reach nearly 600 attendees. To watch the closing remarks and speeches, please click here.