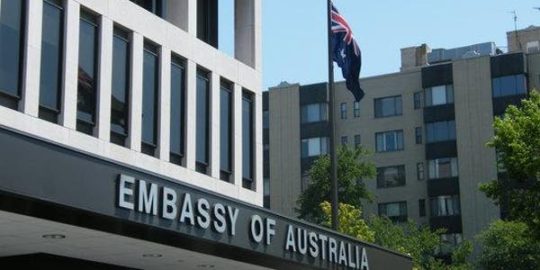 On Monday, February 5th, Australia’s Ambassador to the United States the Hon. Joe Hockey and the Financial Times’ World Trade Editor, Shawn Donnan discussed the future of trade in the Asia-Pacific.

The Honourable Joe Hockey is Australia’s Ambassador to the United States of America, taking up his posting in Washington in January 2016. Mr. Hockey has had a long and distinguished career in public service. He first entered Parliament in 1996 as the Member for North Sydney and spent more than seventeen years on the front bench. Mr. Hockey served as a Minister in a number of different portfolios including Financial Services, Small Business and Tourism, Human Services and Employment and Workplace Relations. In 2013 Mr. Hockey was appointed Treasurer of the Commonwealth and was responsible for all economic policy. He served as Chair of the G20 Finance Ministers and Central Bank Governors in 2014 and a member of the leadership troika in 2015. As Treasurer he was a regular delegate to IMF, World Bank, Asian Development Bank and APEC meetings. Previously Mr. Hockey served as a banking and finance lawyer with a major Australian law firm. He graduated from the University of Sydney with Bachelor degrees in Arts and Law. Mr. Hockey is married to Ms. Melissa Babbage, a company director and former investment banker. They have three young children Xavier, Adelaide and Ignatius.

Shawn Donnan leads the Financial Times’ coverage of trade and development globally from his base in Washington. He previously served as World News Editor, coordinating the FT’s international economic and political news coverage. In that role he oversaw the paper’s award-winning coverage of major news events including the Eurozone crisis and the Arab spring. Before that he served as deputy world news editor, helping to coordinate the FT’s coverage of the 2008 financial crisis and the subsequent economic meltdown. From 2006-2008 he was the FT’s deputy Asia news editor, overseeing the paper’s economic and political coverage of the region. He was the paper’s correspondent in Indonesia for four years before that, covering events including the 2002 Bali bombings and the 2004 Indian Ocean tsunami. Mr. Donnan is a graduate of Boston University.