WITA > Events > War and Values: Deepening the Transatlantic Bond at a Time of Crisis

War and Values: Deepening the Transatlantic Bond at a Time of Crisis 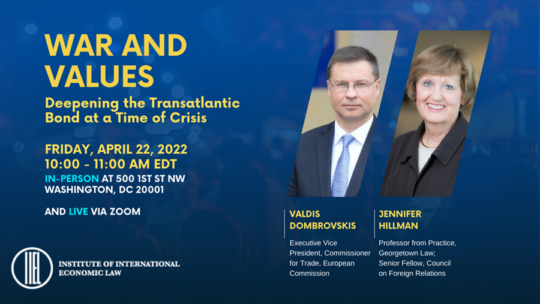 Please join Georgetown Law’s Institute of International Economic Law on Friday, April 22 from 10:00 – 11:00 a.m. EDT in welcoming Valdis Dombrovskis, Executive Vice President (EVP) for an Economy that Works for People and Trade Commissioner at the European Commission, for a keynote address and conversation on “War and Values: Deepening the Transatlantic Bond at a Time of Crisis” at Georgetown Law.

To join us in person, please click here to register by 12 pm, Thursday, April 21.

In response to Russia’s recent invasion of Ukraine, EVP Dombrovskis will highlight the need for accelerated transatlantic cooperation to defend and promote Western democratic values, both in support of Ukraine and at a wider global level. He will also address transatlantic collaboration in tackling global challenges including supply chain resilience, energy and food security, and the need to strengthen global institutions.

The event will be chaired by Jennifer Hillman, Professor from Practice and Co-Director of the Center on Inclusive Trade and Development at Georgetown Law.

Prior to politics, EVP Dombrovskis worked as a senior and chief economist at the Bank of Latvia. He also worked as a research assistant at Mainz University in Germany, the Institute of Solid-State Physics in Latvia, and the University of Maryland. In 2011, he co-authored, “How Latvia came through the financial crisis”. He was awarded the Order of the Three Stars, Latvia’s highest state decoration, in 2014. In March 2022, he received the American Chamber of Commerce to the EU Transatlantic Business Award for his contribution in resetting E.U. – U.S. relations.