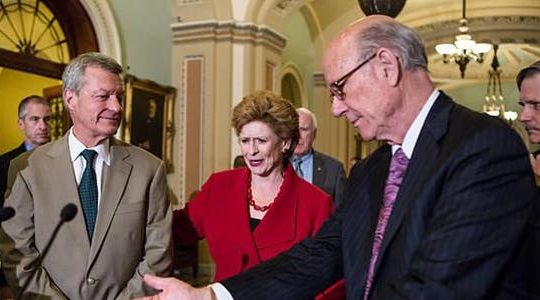 WITA welcomed Chairman Pat Roberts and former Senator Max Baucus to discuss the importance of trade and American leadership to America’s farmers and ranchers. They were joined for a discussion by Grant Aldonas, the former Under Secretary of Commerce for International Trade, and currently the Executive Director or the Institute of International Economic Law at Georgetown Law.

Ambassador Max Baucus is the Co-Chair of Farmers for Free Trade. He was the former U.S. Ambassador to China (2014 – 2017) and Chair of the Senate Finance Committee (2007 – 2014). Ambassador Baucus led the passage and enactment of Free Trade Agreements with 11 countries and worked to increase U.S. exports by knocking down trade barriers. He was deeply involved in orchestrating congressional approval of permanent normal trade relations with China in 2000 and in facilitating China’s entrance into the World Trade Organization in 2001, and is credited with holding China accountable on issues of intellectual property, human rights and currency. Baucus served in Congress from 1978 until his appointment to Ambassador to China, during which time he fostered and enacted groundbreaking legislation, not the least of which is the Affordable Healthcare Act (Obamacare). Baucus now lives in Bozeman, Montana with his wife Melodee.

Senator Pat Roberts represented the Big First District for 16 years, including his home of Dodge City, in the U.S. House of Representatives. In 1996, he was elected to the U.S. Senate. He is currently serving his fourth term. Roberts has built a reputation as a national leader in agriculture, health care and defense. He is an advocate of a strong education system, free and fair trade policies, increased investment in science and technology, a focused foreign policy and a strong military — all of which are necessary to keep Kansas competitive in today’s rapidly evolving global marketplace.Senator Roberts is Chairman of the Senate Agriculture Committee. He becomes the first member of Congress in history to have chaired both the House Agriculture Committee and now the Senate committee. He has also served as the ranking member of each committee. Senator Roberts continues his work in the 114th Congress ensuring that farmers and ranchers have the tools they need to advance American agriculture. He is fighting barriers to trade and regulations that threaten producers’ competitiveness.As a senior member of the Senate Finance Committee, Roberts gives Kansans increased leadership on legislation ranging from taxes to trade, health care, Medicare, Social Security, the aviation industry and transportation – issues impacting all Kansas families.As chairman of the Senate Intelligence Committee for four years, Roberts worked to improve intelligence gathering and analysis capabilities at a critical time in our nation’s history. When concerns arose regarding the timing and accuracy of U.S. intelligence on pre-war Iraq, Roberts led the Intelligence Committee through one of the most sweeping and exhaustive reviews of U.S. intelligence ever conducted. The bipartisan report, unanimously approved by the members of the Intelligence Committee, revealed systemic failures within the intelligence community. The review led Roberts to propose critical and forward thinking intelligence reforms. Many of his proposals were included in the 9/11 Intelligence Reform Act of 2004. In 2004, Roberts delivered the prestigious Landon Lecture at Kansas State University on national security topics. Senator Roberts is also privileged to be a member of the Senate Rules Committee and the Senate Ethics Committee.Roberts is the son of the late Wes Roberts, chairman of the Republican National Committee under President Dwight Eisenhower. His great-grandfather, J.W. Roberts, founded the Oskaloosa Independent, the state’s second oldest newspaper. Following graduation from Kansas State University in 1958, Roberts served in the U.S. Marine Corps for four years, then worked as a reporter and editor for several Arizona newspapers. He joined the staff of Kansas’ U.S. Senator Frank Carlson in 1967. In 1969, Roberts became administrative assistant to First District U.S. Congressman Keith Sebelius. Roberts and his wife, Franki, have three grown children – David, Ashleigh and Anne-Wesley, and five grandchildren.

Grant Aldonas is the Principal Managing Director of Split Rock International, Inc., a consulting firm he founded in 2006 and executive director of the Institute of International Economic Law at Georgetown University Law Center. He was formerly Under Secretary of Commerce (2001-2005), Chief Majority International Trade Counsel to the Senate Finance Committee (1997-2001), Director for South American and Caribbean Affairs in the Office of the United States Trade Representative (1984-85), a Special Assistant to the Under Secretary of State for Economic Affairs (1983-1984) and a U.S. Foreign Service Officer with assignments to Mexico and the Department of State (1980-1985). In addition to his public service, he had a successful career as a partner with Miller & Chevalier in Washington, D.C., specializing in international trade and investment law, export controls and economic sanctions, international tax, defense procurement, and international litigation.