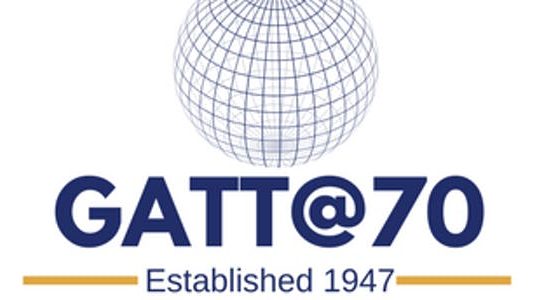 On October 26, 2017, WITA held a reception to celebrate the 70th anniversary of the signing of the GATT. The event payed homage to the belief of the 23 nations that signed the original GATT in October 1947 that international trade is essential to “raising standards of living, ensuring full employment and a large and steadily growing volume of real income and effective demand, developing the full use of the resources of the world and expanding the production and exchange of goods.”

Rufus Yerxa became President of the National Foreign Trade Council (NFTC) in May 2016. The NFTC, founded in 1914, is the leading trade association dedicated solely to advancing the interests of U.S. companies in international commerce. The organization represents over 200 companies through its offices in Washington, D.C. and New York. As president, he oversees NFTC’s efforts in favor of a more open, rules based world economy, focusing on key issues to U.S. competitiveness such as international trade and tax policy, economic sanctions, export finance and human resource management. He is also a Visiting Professor with the Middlebury Institute of International Studies at Monterey (MIIS).

Tim Groser was appointed New Zealand Ambassador to the United States in January 2016. He is also New Zealand’s Special Envoy to the Pacific Alliance. In 2005, Tim was elected to Parliament and from 2008 to 2015 was cabinet minister, most recently as Minister of Trade and Minister Responsible for Climate Change Issues. From 2002-2005 he was New Zealand’s Ambassador to the World Trade Organization (WTO), and the Chair of Agriculture Negotiations for the WTO. He also served as Ambassador to Indonesia from 1994-1997.  Tim is regarded as one of the world’s leading experts on international trade. He has served New Zealand with distinction in a number of capacities, including being New Zealand’s Chief Negotiator in the GATT Uruguay Round, the Round that brought agriculture into the system of the world trade rules for the first time, and has been instrumental in helping to develop the Global Research Alliance on greenhouse gas emissions. Tim is a Special Adviser on climate change to IEA and an Honorary Adviser to the New York Asia Society. He was born in Perth, Scotland and moved to New Zealand with his parents in 1958. He speaks French and Indonesian.

Ambassador Schwab served as Dean of the University of Maryland School of Public Policy from 1995 through 2003. Before joining the Administration, she held the position of President and CEO of the University System of Maryland (USM) Foundation and USM Vice Chancellor for Advancement. Schwab formerly served as Director of Corporate Business Development at Motorola, Inc., where she handled strategic planning and negotiation in China and elsewhere in Asia . Scwhab also served as Assistant Secretary of Commerce and Director General of the U.S. & Foreign Commercial Service during the Administration of George H.W. Bush. Schwab spent most of the 1980s as a trade policy specialist and then legislative director for Senator John C. Danforth (R-Mo.), playing a major role in numerous U.S. trade policy initiatives, including landmark trade legislation that Congress enacted in 1984 and 1988. Previously, Schwab served as a Trade Policy Officer in the U.S. Embassy in Tokyo . Her first job was as an agricultural trade negotiator in the Office of the U.S. Trade Representative. Ambassador Schwab is a member of the Council on Foreign Relations and a Fellow of the National Academy of Public Administration ( NAPA ). She published Trade-Offs: Negotiating the Omnibus Trade Act , (Harvard Business School Press, 1994), as well as articles on U.S.-Japan trade relations, trade politics, and public policy education.