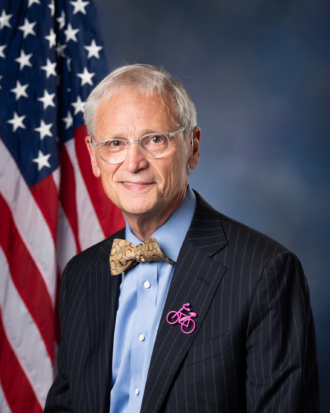 On Wednesday, Sept 23 at 10:00 AM ET, WITA is co-hosting a webinar with the American Leadership Initiative (ALI) with Congressman Earl Blumenauer (D-OR), Chair of the House Ways & Means Trade Subcommittee. Mr. Blumenauer is planning the trade agenda for the next Congress, considering the expiration of TPA, TAA and GSP. He is looking at how to reframe the trade agenda to address labor, sustainability and other domestic concerns.

A lifelong resident of Portland, Oregon, Congressman Earl Blumenauer (OR-3) was raised in SE Portland and attended Centennial High School.

While still a student at Lewis and Clark College, Earl spearheaded the effort to lower the voting age both in Oregon and at the national level. He was elected to the Oregon Legislature in 1972, where he served three terms and Chaired the House Education and Revenue Committee in 1977-78. In 1978, he was elected to the Multnomah County Commission, where he served for eight years before being elected to the Portland City Council in 1986. There, his 10-year tenure as the Commissioner of Public Works demonstrated his leadership with innovative accomplishments in transportation, planning, environmental programs and public participation that helped Portland earn an international reputation as one of America’s most livable cities.

Elected to the US House of Representatives in 1996, Earl created a unique role as Congress’ chief spokesperson for Livable Communities: places where people are safe, healthy and economically secure.  From 1996 to 2007, he served on the Transportation and Infrastructure Committee, where he was a strong advocate for federal policies that address transportation alternatives, provide housing choices, support sustainable economies and improve the environment. He was a member of the Foreign Affairs Committee from 2001 to 2007, and vice-chair of the Select Committee on Energy Independence and Global Warming from 2007 to 2010.  He is currently a member of the Ways and Means Committee, Chairman of the subcommittee on Trade and is a member of the subcommittee on Health.