WITA > WITA Webinar on the Future of the WTO with Amb. Zoellick and Pascal Lamy

WITA Webinar on the Future of the WTO with Amb. Zoellick and Pascal Lamy 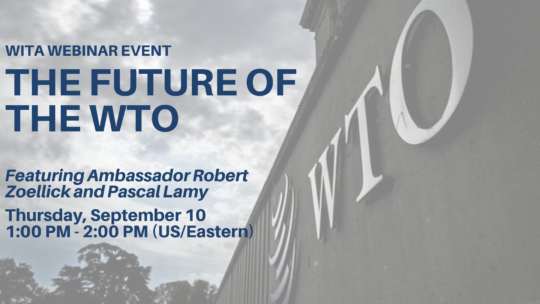 Please join Ambassador Robert Zoellick, Former President of the World Bank and United States Trade Representative, and Pascal Lamy, Former Director General of the WTO for a discussion of the Future of the WTO.

This event is free for WITA members. Registration is required.

WITA Webinar on the Future of the WTO Event Video

Please join WITA on Thursday, September 10 at 1:00 PM (US/Eastern) as we welcome Pascal Lamy and Robert Zoellick for a discussion of the future of the World Trade Organization.

Pascal Lamy served for two consecutive terms as Director-General of the World Trade Organization (WTO) from September 2005 to August 2013. A committed European and member of the French Socialist party, he was Chief of Staff for the President of the European Commission, Jacques Delors from 1985 to 1994. He then joined the Credit Lyonnais as CEO until 1999, before returning to Brussels as European Trade Commissioner until 2004. Mr. Lamy holds degrees from HEC School of Management, the Institut d’Etudes Politiques (IEP) and the Ecole Nationale d’Administration (ENA).

Pascal Lamy was appointed in 2019, President of the Paris Peace Forum. He shares his other activities between the Jacques Delors Institute (President emeritus), the presidency of the World Committee on Tourism Ethics, the presidency of the French Committee of the Pacific Economic Cooperation Council (PECC) and in as well as various mandates or missions related to international affairs. He is also President of the Board of Directors of the Musiciens du Louvre (Orchestra of Marc Minkowski), member of the Board of Directors of the Fondation nationale des Sciences politiques, the Mo Ibrahim Foundation, the Thomson Reuters Founders Share Company, Transparency International France and the Center on Regulation in Europe (CERRE); senior advisor to the Brunswick Group, to Trade Mark East Africa (TMEA) and to the World Trade Board, member of the Advisory Boards of Transparency International, the Oxford Martin School and member of the Alpbach Forum advisory Board. He is affiliate Professor at HEC and at the China International Business School (CEIBS Shanghaï) and CEPR Distinguished Fellow. He is currently also member of the Global Future Council on regional Governance at the World Economic Forum and member of the Orientation Committee of the Colbert Foundation and member of the Beijing Forum Advisory Council.

Ambassador Robert B. Zoellick is Senior Counselor at Brunswick Geopolitical, an advisory service of Brunswick Group, and a Senior Fellow at the Belfer Center for Science and International Affairs at Harvard University’s Kennedy School of Government.  In addition, Zoellick serves on the boards of Temasek, Singapore’s Sovereign Wealth Fund, and Twitter, Inc., chairs the International Advisory Council of Standard Chartered Bank, and is on the Advisory Board of Swiss Re.  He is a member of the boards of the Peterson Institute for International Economics and the Carnegie Endowment, chairs the Global Tiger Initiative, and is a member of the Global Leadership Council of Mercy Corps, a global humanitarian agency.

Zoellick was the President of the World Bank Group from 2007-12, U.S. Trade Representative from 2001 to 2005, and Deputy Secretary of State from 2005 to 2006. From 1985 to 1993, Zoellick served as Counselor to the Secretary of the Treasury and Under Secretary of State, as well as White House Deputy Chief of Staff.  He published his book, “America in the World: A History of US Diplomacy and Foreign Policy” in August 2020.

Moderator: Amb. Peter Allgeier is President of Nauset Global LLC, a consulting firm specializing in international trade and investment issues facing U.S. and foreign businesses. He served as President of the Coalition of Service Industries (CSI) from September 2012 until March 2016. CSI is the association representing the international trade and investment interests of the American service economy. Its membership includes major international companies from the banking, insurance, telecommunications, information technology, express delivery, audiovisual, energy services, and other service industries.

He is the recipient of the Distinguished Service Award from the Washington International Trade Association (WITA) and the Woodrow Wilson Distinguished Alumnus Award from Johns Hopkins University School of Advanced International Studies (SAIS). In 1988 President Reagan presented him with the Presidential Distinguished Rank Award, which is the highest performance honor bestowed on career federal officials.