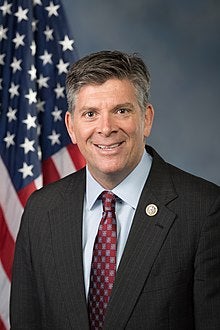 Congressman LaHood is a member of the House Ways and Means Committee. He is also a Co-Chair of the bipartisan U.S.-China Working Group, and a member of the Republican China Task Force. The Task Force works across congressional committees on policies to enhance domestic competitiveness considering increasing competition from China.

Congressman Darin LaHood, born and raised in Peoria, serves the constituents of the 18th District of Illinois. Sworn into the US House of Representatives on September 17, 2015, LaHood quickly transitioned into office after his special-election win on September 10. He won re-election to serve his second full-term in Congress on November 6, 2018, defeating his opponent with 68-percent of the vote.

Prior to his election to Congress, LaHood served four years in the Illinois State Senate, beginning in 2011. LaHood spent more than nine years as a State and Federal Prosecutor. From 2001-2006, he worked for the U.S. Department of Justice as an Assistant United States Attorney in Las Vegas, Nevada. LaHood has also served as an Assistant State’s Attorney in Cook County and Tazewell County. From 2006 up until his election to the House of Representatives, he practiced with the Peoria law firm of Miller, Hall & Triggs.

LaHood’s record throughout his public service has resonated a strong, conservative record, promoting economic development and fiscal responsibility. LaHood has been an outspoken advocate for creating a better business climate in Illinois to boost the state and national economy, to create jobs for Illinoisans.

LaHood also serves on the U.S. Joint Economic Committee and is a member of the US-Cuba working group. He currently co-chairs the US-China working group, the U.S.-Brazil Caucus, the Digital Trade Caucus, the U.S.-Lebanon Friendship Caucus, and the Congressional Soccer Caucus.

Recognizing the need for reform, LaHood has fought to increase transparency and promote ethical behavior. He looks to build a strong, pro-growth economy while fighting to reduce a record deficit that threatens the future of our children and grandchildren.

LaHood, a third-generation Peorian, graduated from Spalding High School. He earned a B.A. from Loras College and holds a J.D. from The John Marshall Law School. In 2013, he was selected as an Edgar Fellow, a program run by former Governor Jim Edgar, which highlights future Illinois leaders. In 2008, LaHood was recognized in Peoria as a 40 Leaders Under Forty award winner. An avid runner, he has completed five marathons.