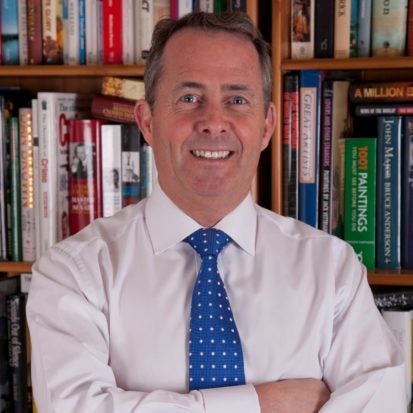 Rt Hon Dr. Liam Fox MP, Former UK Secretary of State for International Trade and President of the Board of Trade

Rt Hon Dr. Liam Fox MP is a British politician who has been a staunch advocate for free-trade and a defender of the rules based global trading system based on the WTO.

Dr Fox is a member of the UK Parliament and a Privy Counsellor.

As International Trade Secretary under Prime Minister Theresa May, from 2016 to 2019, he successfully built a new department of government to oversee the creation of the UK’s first independent trade policy for over 40 years post Brexit. Strongly anti- protectionist, he was also a passionate advocate of the ITC’s ‘SheTrades’ initiative, believing that greater access to trade for women is both economically empowering and socially progressive. He believes that there must be much better coordination between trade and development policy if the full potential of both is to be achieved.

Dr. Fox entered the House of Commons in 1992 and has served in a wide range of posts in both government and opposition. In the government of Prime Minister John Major, he served as Lord Commissioner of the Treasury and then as Minister in the Foreign & Commonwealth Office where he answered on Trade and Aid Policy in the House of Commons. It was during this time that he worked extensively on what became known as the ‘Fox agreement’ in Sri Lanka, designed to help foster the conditions in which a negotiated solution to the country’s civil war could be achieved.

He was appointed Defence Secretary under Prime Minister David Cameron in May 2010, overseeing a major reorganisation of the Ministry of Defence and British involvement in the campaigns in Afghanistan and Libya. He has continued to argue that there needs to be a better understanding about the links between Trade, Prosperity and Security, a theme that was a regular feature of his time as international trade secretary. Many of these issues were discussed in his 2013 book ‘Rising Tides’ which set out the challenges facing the globalised era ranging from terrorism to the potential crisis in global commodities, especially water. The book contained a number of conversations with world leaders from Tony Blair to Condoleeza Rice.

Following his period as Defence Secretary he founded a charity, Give Us Time, which provides family holidays for those who serve in the armed forces, especially those who saw combat in Iraq and Afghanistan. While there are a number of charities that look after service personnel themselves, Dr Fox felt that too little support was given to the families of service personnel whose own hardship and sacrifice often went unrecognised.

He was born in Scotland and studied medicine at the University of Glasgow before practising as a doctor in the NHS. He also worked as a civilian army medical officer and a divisional surgeon with St John ambulance, a voluntary medical charity. He has also worked as a speech writer to Prime Minister Margaret Thatcher and is currently finishing writing a book on Pandemics.