Trade news > As trade disputes intensify, U.S. counties that rely most on exports tend to be small and in South, Midwest

As trade disputes intensify, U.S. counties that rely most on exports tend to be small and in South, Midwest

Think of a place that exports a lot and you might picture a bustling seaport, such as New York or the Los Angeles/Long Beach complex. But the most export-dependent places in the United States often are far from the big cities, and are much more likely to be in the South or the Midwest than on either coast, according to a Pew Research Center analysis of county-level data compiled by the Brookings Institution for its “Export Monitor” project.

Local economies that rely heavily on exports, in turn, have a lot at stake as multiple trade disputes play out between the U.S. and China, Mexico and other trading partners. 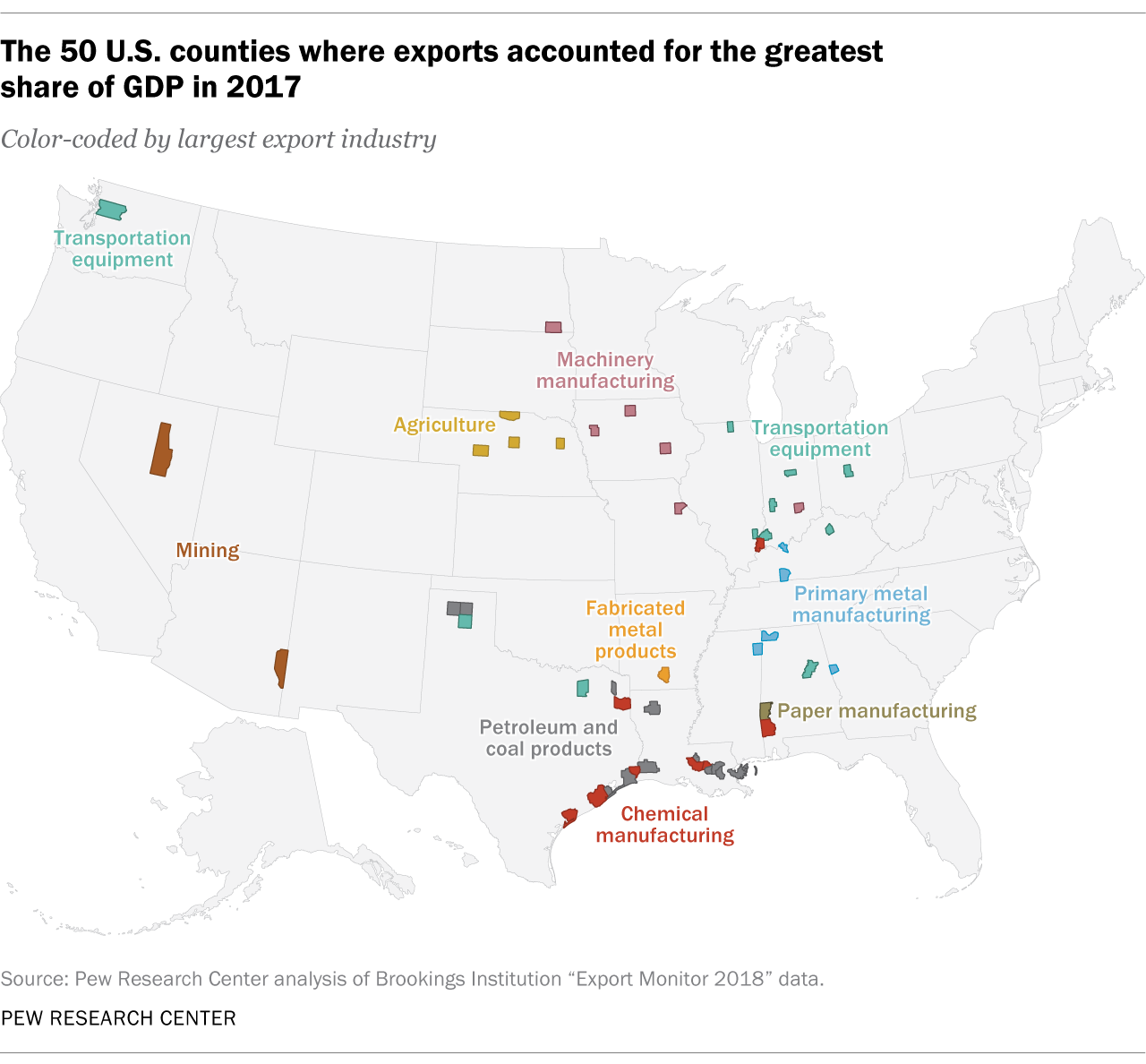 Measured as a share of gross domestic product, four sparsely populated parishes (Louisiana’s county equivalents) outside New Orleans are the most export-reliant localities in the country, according to the Center’s analysis. Those parishes are home to several giant oil and gas refineries and petrochemical plants, which account for the great majority of their exports. Taken together, exports from those parishes totaled more than $11 billion in 2017, or nearly two-thirds of their combined GDP.

The story is similar in Hancock County, Kentucky, outside Owensboro. The county, whose economy is dominated by aluminum smelters and aluminum products companies, exported $417 million in goods and services in 2017, or about 57% of its total GDP.

Meanwhile, Los Angeles County, the nation’s most populous county and home to its busiest port complex, exported $73.8 billion worth of goods and services in 2017 – the most of any county in the nation, but representing less than 10% of its total GDP.

Overall, exports represented 12.1% of U.S. GDP in 2017, according to the Bureau of Economic Analysis. Nearly half of the 3,114 counties and county equivalents in the Brookings dataset (1,533) were at or above that level.

In general, the most export-dependent counties in the U.S. tend to be smaller, less economically diversified, and in the South and Midwest. Of the 50 counties whose exports represent the biggest share of local GDP, 30 are in the South (including 11 in Texas and nine in Louisiana), 17 are in the Midwest, and three are in western states. In fact, only one county in the Northeast – Fulton County, Pennsylvania, headquarters of construction equipment maker JLG Industries – derives as much as 30% of local GDP from exports.