South Korea’s trade is set to experience moderate growth in the machinery and technology industries, offering some optimism amidst a continuing trade for the three-month period ending in January 2020, according to data from the DHL Global Trade Barometer released by DHL, the world’s leading logistics company. 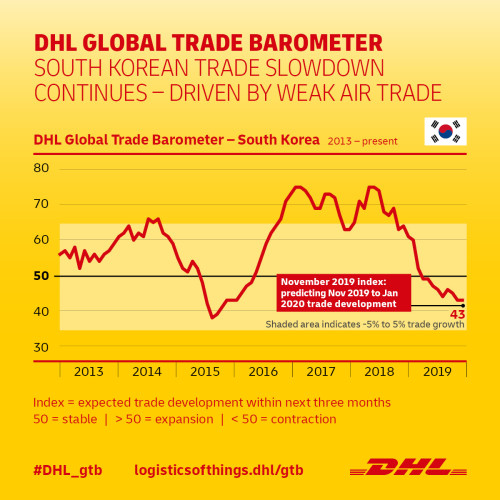 “The results of this quarter’s index point towards a protracted downturn in trade, driven mainly by contracting air trade. However, the renewed resilience of trade in key sectors suggests that South Korea’s economy may have reached an inflection point. We expect the Index’s forecasts for Basic Raw Materials, Machinery Parts and High Technology growth to be further enhanced in coming quarters by the recent strengthening of the ASEAN-Republic of Korea Free Trade Area, a move that will enhance air links, infrastructure investment and smart cities development — all of which should provide positive momentum for South Korea’s key electronics and manufacturing industries.” said SP Song, Managing Director, DHL Global Forwarding Korea.

Steady but mild decline negatively affects all countries, except India

The Barometer’s results also suggest that world trade is expected to continue at moderate pace but further contract for the next three months, driven by minor decreases in both air and containerized ocean trade. Against previous quarters this year, the downward trend in trade growth remains mostly stable, neither indicating an acceleration of the decline nor a bottoming out of contractionary movement. All seven nations monitored by the Barometer received indexes below 50 points except for India, where the Barometer forecasts moderate growth of five points to 54 points for India. While Japan and the UK had been the only countries with positive trade outlooks in the previous update in September, the two countries record the highest losses in this period.

“According to the DHL Global Trade Barometer the year will probably end with moderate world trade. However, we’ve to bear in mind where we come from: The rapid growth world trade has undergone in recent years was like climbing the Mount Everest. Now, we are on the descent, but we are still breathing altitude air,” Tim Scharwath, CEO of DHL Global Forwarding, Freight, says. “A countless number of stable trade relations continues to flourish worldwide, despite smouldering trade conflicts and geopolitical uncertainties.”