How Does the Digital Transformation Change Global Value Chains?

The past decades have been characterized by a strong expansion of global production networks: driven by falling transportation, communication, and coordination costs, production has become increasingly fragmented internationally. In 1970, approximately 37% of the world’s total exports contained inputs that had been imported before. This share rose to over 50% in 2008 and has remained relatively stable since then, according to the World Development Report 2020 (World Bank, 2020).

These GVCs, like all trading activities, have created winners and losers. On the one hand, specialized firms and their workers (often also in emerging and developing countries) have been able to participate in global production networks and have benefited from investment and knowledge transfer. On the other hand, firms and workers who previously carried out these activities (mostly in developed countries) have had to cope with labour market adjustments such as lower wages or even unemployment spells as production activities moved elsewhere. Consumers, for their part, have generally benefitted from lower prices and larger variety.

Increasing the scope for automation

With the recent digital transformations there is growing potential to further automate production. While automation is not a new phenomenon, the digital transformation —with innovations such as the Internet of Things or advanced manufacturing techniques including 3D printing— makes it possible to link production stages by a digital thread. This will allow for smaller, if not individual, batches in production: mass customization rather than mass production.

How will automation impact the global division of labour? One of the major reasons for building up GVCs was saving in labour costs. Automation means that machines (robots) can substitute labour at a lower cost, so it is possible that automation eradicates the comparative advantage of low-wage countries, leads to reshoring of production, and hence shortens GVCs. Furthermore, the possibilities of enhanced customization may also move production closer to consumers.

The evidence for reshoring is unclear. In an analysis examining international operations of US firms, “no evidence of a widespread reshoring trend” was found. However, something is going on: an ILO analysis on the global use of robots found that, between 2005 and 2015, there was a negative impact of robot usage on worldwide employment. This is mainly the case across emerging economies rather than developing ones. Furthermore, the use of robots in developed countries decreases offshoring. This evidence suggests that, while production may not have shifted back to developed economies (reshoring), machines have nevertheless been a substitute for labour.

Automation of labour-intensive production tasks in GVCs becomes critical if countries are highly dependent on exports within a specific industry. The fast-paced retail industry is a good example of this. Retail exports account for over two-thirds of total exports in countries such as Bangladesh or Cambodia, where sewing tasks are carried out. Even though the automation potential for sewing tasks is currently limited, the countries may be hit hard once technological innovations compete with their comparative advantage in sewing.

The growing role of services in GVCs

The proliferation of global production networks would not have been possible without a range of services: telecommunication, transportation, financial, etc. Thus, services have always been an important part of GVCs. Yet, during the past decades, trade in services has grown significantly more rapidly than trade in goods, as can be seen in Balance of Payments statistics. Figure 1 shows that trade in services that can potentially be digitally delivered has grown significantly stronger than services that can only be physically delivered (such as tourism or construction). Due to the digital transformation, an increasing number of services can also be easily traded digitally, while the production of services has increasingly become internationally fragmented, e.g. when tax returns are prepared in one country and finalized in another.

The digital transformation has also spilled over onto the manufacturing industry, e.g. when goods are bundled with insurances or repair services, with financial services, or with subscriptions to a regular delivery of supplies. In fact, for many manufactured goods the services are central to product differentiation. Thus, the line between goods and services becomes increasingly blurred.

How does this impact the global division of labour? With the emergence of digital platforms everyone can offer a service and every company can essentially source its service inputs from anywhere around the globe. This has enabled specialized suppliers, especially small- and medium-sized enterprises (SMEs), to become part of GVCs – both upstream and downstream. For example, digitally connected SMEs tend to import a higher share of their production inputs, because they can find – and be found by – specialized suppliers worldwide. At the same time, this “globalization of the labour market” drives competition among local workers and suppliers, which must be addressed by flexible skill upgrading and innovation.

Overall, it is clear that the digital transformation will continue to expand production possibilities, change GVCs and, thus, have geoeconomic implications. On the one hand, the digital transformation will support and perhaps enhance GVCs, as it provides better ways to control supplier relationships, it offers new possibilities for GVC participation, and it enables new products blending goods with services. Countries with a better digital infrastructure and an adequately skilled workforce are likely to have a competitive advantage and capture higher shares of value added in this world. At the same time, these developments will promote a concentration of power in firms and countries that control the underlying platforms. The geopolitical battle for dominance in the platform economy is already ongoing, for example when Chinese suppliers are banned from public tenders.

On the other hand, the digital transformation increases the scope for automation and customized production. Countries abundant in low-skilled labour are likely to lose their comparative advantage, as the size of the home market becomes more important than labour costs in choosing production locations. At the same time, digitalization may also enable countries to leapfrog development: while it was previously important to have an industrial base to participate in GVCs, digital infrastructure or innovative SMEs may now be more important factors. 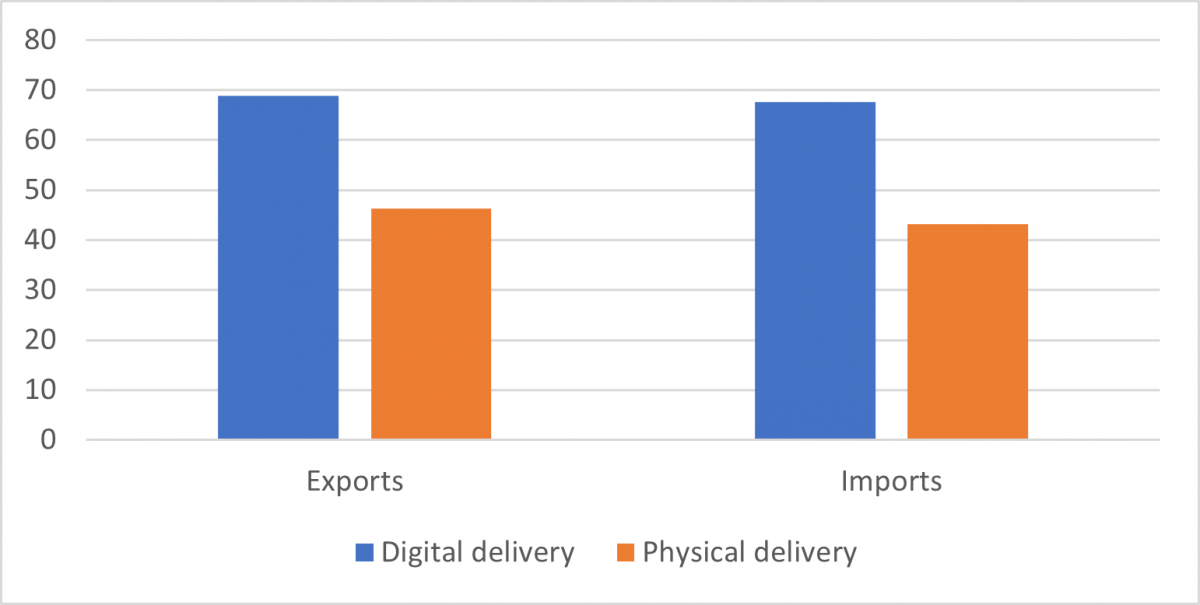 Source: OECD (2019) – Trade in services – EBOPS 2010, trade in services by partner economy; classification of digitally-deliverable services based on UNCTAD (2015). The following services are classified as digitally deliverable: insurance and pension services; financial services; charges for the use of intellectual property; telecommunications, computer and information services; other business services; and audio-visual and related services.

To read the full report from the Italian Institute for International Political Studies, please click here.