ATP RESEARCH > Latin Americans: On Board with Trade

Latin Americans: On Board with Trade

How do Latin Americans feel about international trade? Are they in favor of it? If so, to what extent?

We asked these questions ourselves at the Inter-American Development Bank, as part of a study on how trade liberalization has impacted Latin America and the Caribbean (LAC) in recent decades.

To answer these questions, the IDB added a module on foreign trade to the 2018 Latinobarómetro opinion poll, which found that on average, 73% of Latin Americans expressed support for their country increasing trade with other countries.

Levels of support varies from country to country, ranging from 59% in Argentina and Peru to over 85% in Venezuela, Honduras, Uruguay, and Nicaragua. Despite this range, most respondents in each country favor increased trade. 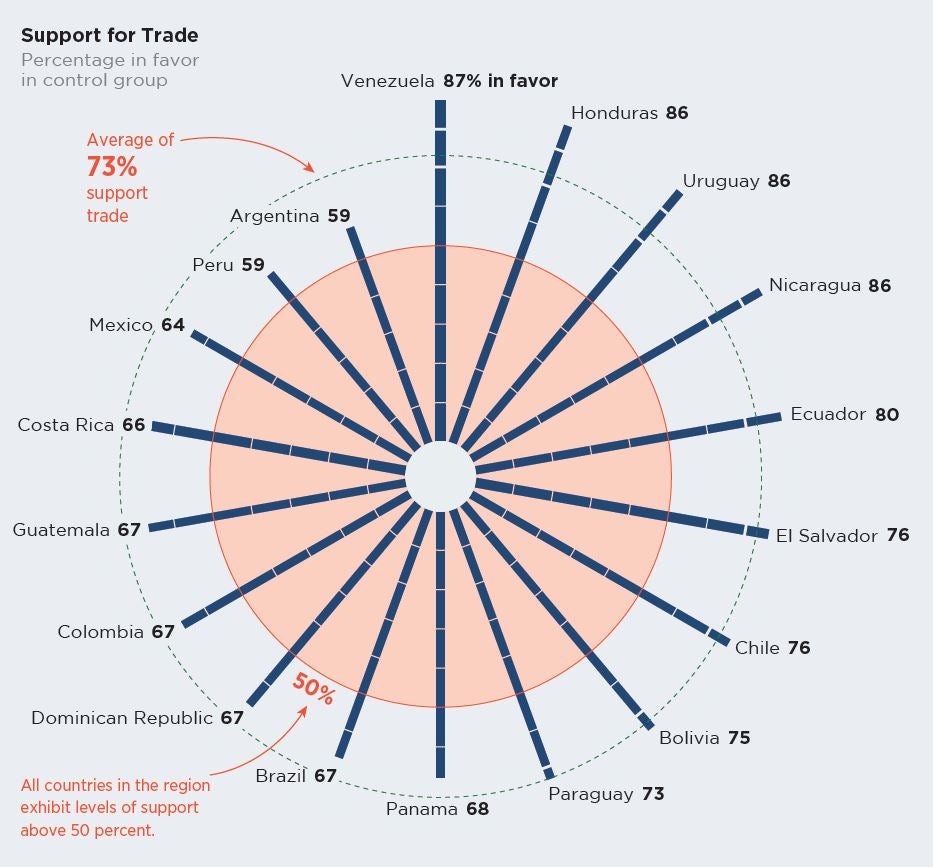 However, the results also reveal that support for trade is fragile, as less than half of Latin Americans continued to express support when informed it may have negative consequences for employment. These reactions remind us of Princeton professor Alan Blinder’s comment that support for trade is “a mile wide and an inch deep.” This also seems to be true of Latin America.

Trade is good for employment

The poll also reveals a series of patterns that may prove particularly interesting to trade policymakers in LAC:

The above figures suggest that when it comes to trade, people care first and foremost about employment, a finding that policymakers seeking to pursue trade reforms or promote trade liberalization can make use of in their political and media strategies.

Both LAC and the world are protrade

By way of comparison, the poll’s findings on levels of support for trade among Latin Americans were on par with global attitudes to trade. According to the 2017 Pew Global Attitudes Survey, on average, 86% of respondents in 38 countries think trade and business ties with other nations are good for their country. According to Pew, levels of support for trade in Latin America are lower but still considerable at 80%.

A review of the Pew data on support for trade over time reveals that between 2002 and 2017, despite a slight downturn in support in Brazil, there is no evidence of a significant anti-globalization reaction in how either Latin American countries or the rest of the world feel about trade.

Major findings on support for trade

After analyzing the results of Latinobarómetro and comparing them with the Pew survey, we share three major findings on trade support that we think are particularly relevant for LAC countries:

To find out more, download the chapter “On Board with Trade, for Now: People’s Attitudes and Support”, which we are releasing as a special sneak preview for readers of this blog. This is one of the chapters of the IDB’s flagship Development in the Americas report, which focuses on trade this year and will be launched in November.