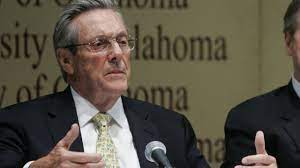 Bill Brock, Tenn. senator who rebuilt the GOP after Watergate and became labor secretary, dies at 90

Bill Brock, a Tennessee Republican who served in both houses of Congress, helped rebuild the GOP after the Watergate scandal in the 1970s, then held Cabinet-level positions in the administration of President Ronald Reagan, died March 25 at a hospital in Fort Lauderdale, Fla. He was 90.

His family announced the death in a statement. The cause was pneumonia.

Mr. Brock was an executive with his family’s candy company in Chattanooga, Tenn., before he was elected to the House of Representatives in 1962. He was the first Republican to represent his district in Congress in more than 40 years.

During his eight years in the House, he had a conservative voting record that he later renounced, in part. Among other positions, he opposed the creation of Medicare, the Civil Rights Act of 1964 and the landmark Voting Rights Act of 1965.