Double 11 is a shopping festival held by leading e-commerce platforms in China, such as Taobao and JD.com. The hyped-up shopping festival falls on November 11, a self-explanatory date and is the largest and most popular annual global shopping festival in the world – overshadowing Black Friday and Cyber Monday combined.

Double 11, also known as “Singles’ Day” originated as an shopping festival first initiated by Alibaba in 2009 for bachelors using the number “1” to resemble a single man. Since 2009, other e-commerce platforms have followed suit, all seeking to acquire a share of revenue in the increasingly competitive but lucrative e-commerce marketplace. Over this 10-year period, the shopping festival has transformed itself from the celebration of being single to a nationwide and all-sites-wide shopping fever.

Double 11 sees records broken every year, and customers waiting eagerly for the clock to strike at midnight on November 11. The shopping event is in competition with no one but itself, and sales figures tell a significant part of the story. Taobao’s gross merchandise value (GMV) hit RMB 100 billion (US$15 billion) in 2016, RMB 200 billion (US$30 billion)  in 2018, and last year the number peaked at RMB 268 billion (US$40.2 billion) in 24 hours.

This year’s shopping festival marks the 12th Double 11. Alibaba was reported to nearly double last year’s record with over RMB 498 billion (US$74 billion) in total sales from November 1 to November 11, boosted by the longer shopping period. On November 11 alone, there was more than RMB 372.3 billion (US$56 billion) in sales by 12:30 a.m. with the participation of more than 250,000 brands and 800 million consumers, indicating a further consumption recovery since COVID-19.

This matched expectations, with many analysts expecting this year’s event to set the bar even higher than previous years. According to a survey conducted by market research firm Oliver Wyman, going into the festival, 86 percent of Chinese consumers said they were willing to spend the same amount or more than what they did during last year’s Singles Day and 48 percent of the consumers planned to increase their spending. 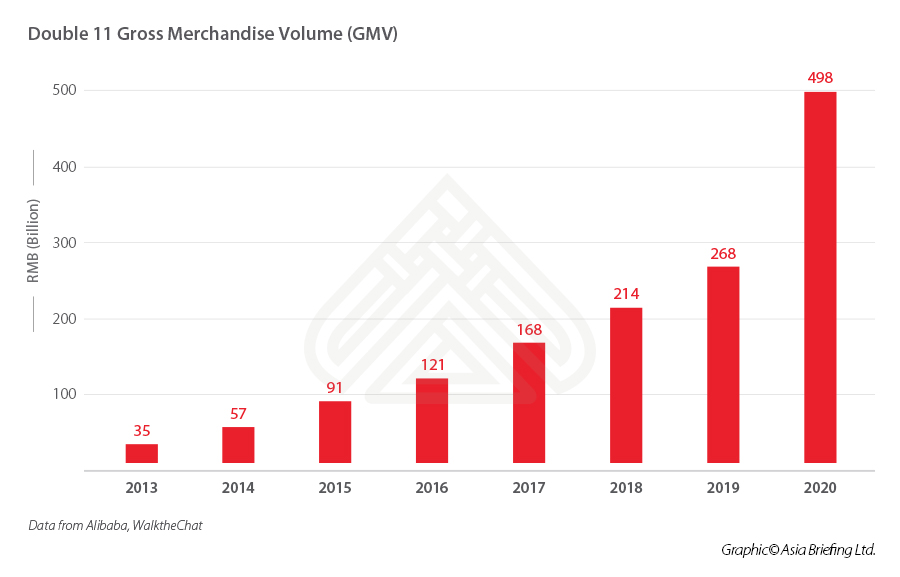 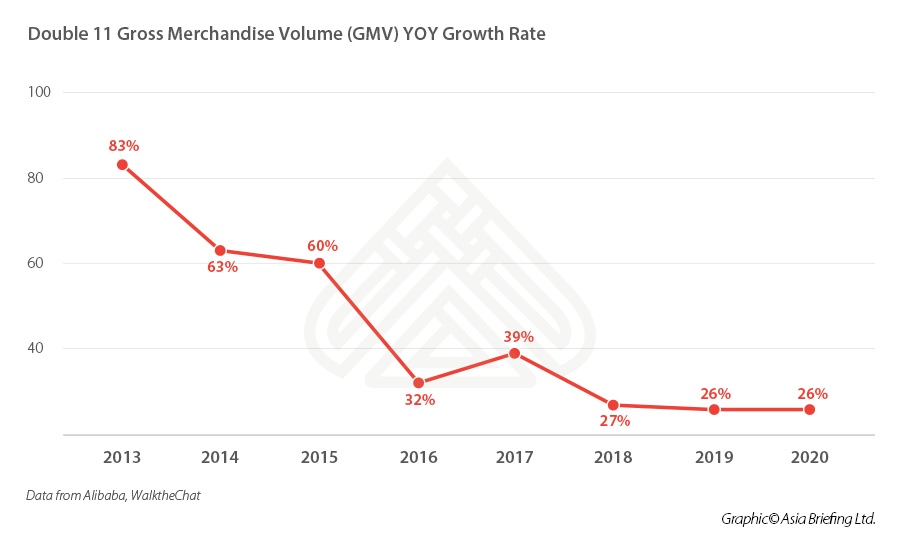 According to the economic data released in the first quarter of 2020, China’s economy contracted 6.8 percent, the first recorded contraction in China since the late 1970s. In the same period, some 460,000 Chinese firms closed and registration of new firms fell 29 percent year-on-year in between.

Now having basically emerged from the worst of the pandemic, China is receiving close attention from the rest of the world and is expected to offer a blueprint to advance forward while adjusting to the ‘new normal’.

Once internal movement relaxed and businesses reopened, China began actively addressing the impact of the long-ranging disruptions, and is expected to show positive growth in 2020. The World Bank has also forecast that the country will rebound to grow by 7.9 percent in 2021. Double 11 comes amid this economic rebound and its performance will be considered indicative of China’s consumption power after the pandemic.

In a livestreamed event, Alibaba Group Executive vice chairman Joe Tsai expressed his optimism towards the economic outlook, citing that the Chinese economy has bounced back to pre-pandemic levels, pointing to the 17 percent growth year-on-year of e-commerce in China. And Double 11 record sales is a powerful signal of the consumption strength in China.

Retail sales have been gravely impacted by COVID-19, and Double 11 is a key trial for retailers seeking the long-awaited recovery from lost sales from the first half of 2020 and easing the burden of backlog conversion.

Also, the sales performance during the shopping festival will be a strong indicator of how well the Chinese retail market is adapting to post-COVID realities and a test of the Chinese market’s ability to pick up quickly.

It is worth noting that the logistics industry, also severely affected by the global pandemic, is looking forward to a desperately-needed recovery. DHL Express has invested €1 billion (US$1.17 billion) this year to improve its infrastructure, network, and people for the upcoming shopping events. Delivery companies can expect a 50 percent jump in shipping volumes this month as countless orders come pouring in.

New features of this year’s Double 11

This year has witnessed the largest scale of pre-orders as Alibaba applied new strategies to expand their sales. Although branded as “11.11 Global Shopping Festival”, the sales actually commenced on October 21, thus making the Double 11 journey a marathon rather than a 24-hour flash sale.

A new sales window was added from November 1 to 3 on Taobao/Tmall, ahead of the main event on November 11, with the aim to create more opportunities for merchants to showcase their products. Nearly 140 million items were sold on JD.com during the pre-sales period from October 21 to 28, an increase of over 42.3 percent from the same period last year.

The shopping spree was extended to help boost the sales figures, however, complaints from consumers grew considerably on social media, such as Weibo, as many people had gripes about the complicated rules, or retailers’ savvy strategies to control the price. While catchlines and the strikingly low price are common on the description page, a fair amount of calculation is involved as well.

Livestreaming e-commerce is the fastest-growing area of China’s internet, which has received exponential growth from the stay-at-home economy accelerated by the outbreak of COVID-19. For this year’s Double 11, livestreaming played a bigger role in enticing price-sensitive customers. Taobao made sure its livestreamers had access to a larger number of products and offered bonuses to those who did especially well.

Having livestreamers all geared up for the Double 11, the festival kicked off as Taobao’s star anchors, Viya and Li Jiaqi, both started their first livestreaming at midnight on October 21, a grand opener for the festival. Together, they generated RMB 8 billion (US$1.2 billion) worth of sales that night alone.

Over 30 liverstreamers generated more than RMB 100 million (US$15 billion) in sales during this year’s shopping festival. During the peak of the sales event, some 583,000 orders were placed each second.

Double 11 is also one of the most important new product launch events for overseas brands entering China for the first time. This year, more than 2 million new products were introduced during the festival to meet Chinese consumers’ growing demand for international products.

The booming industry of livestreaming e-commerce is under the spotlight of government regulation.

According to the draft regulation Measures for the Supervision and Administration of Online Transactions, issued by China’s State Administration of Market Regulation (SAMR) on October 20, social media apps that provide business services may be subject to the same oversight as e-commerce platforms.

Also, back in June this year, the China Advertising Association and another industry body, the Professional Committee of Media Shopping of China General Chamber of Commerce, drafted separate codes of conduct in the first steps towards more comprehensive regulation, including content censorship and real-name registration for livestreamed shopping promotions.

Those steps are crucial for the government to monitor the qualifications of both vendors and goods, to protect consumer rights and intellectual property, and essentially to maintain appropriate oversight on the livestreaming industry,

Beyond sales: Implication for businesses, consumption, and economy

Double 11 is an emblem of different things to different people, depending on their roles in the market. But, for foreign investors, it is widely recognized as a proxy marker for domestic consumer spending. China has a tremendous consumer market with higher-than-ever demand.

After private consumption was hit by COVID-19, all business participants needed to figure out how to sustainably tap into the market base of 1.4 billion people once again. Double 11 is therefore being regarded as a barometer of Chinese consumption and economic resilience this year.

According to a report published by Shenzhen-based think tank China Development Institute on November 3, the country’s digital economy is expected to grow by around 15 percent annually between 2020 and 2025.

The size of China’s digital economy could reach RMB 80 trillion (US$12 trillion) by 2025, accounting for 55 percent of the country’s GDP (gross domestic product). If the outbreak of the COVID-19 pandemic has only proved thing for business in China, that will be the strong vitality of the digital economy. Digitalization is undoubtedly an indispensable trend and will continue to play a titanic role in retail in the future.

Further, a new economic policy focus, framed as the “dual circulation strategy (DCS)” was introduced in May this year as a way for China to respond to the global uncertainty, to rebalance its economy, and to maintain sustainable growth. The DCS strives to both spur China’s domestic demand while facilitating foreign investment. The e-commerce industry is expected to contribute to this strategy, by creating new opportunities for investors looking to participate in China’s ever-growing consumer market.

China Briefing is written and produced by Dezan Shira & Associates. The practice assists foreign investors into China and has done so since 1992 through offices in Beijing, Tianjin, Dalian, Qingdao, Shanghai, Hangzhou, Ningbo, Suzhou, Guangzhou, Dongguan, Zhongshan, Shenzhen, and Hong Kong.