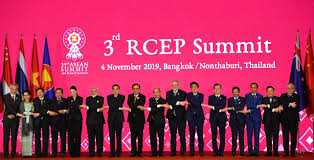 China may claim a symbolic victory in the signing of the world’s biggest trade deal in the face of ongoing US disinterest in multilateralism, but the direct economic benefits will be marginal, studies show.

The trade agreement, initiated by the Association of Southeast Asian Nations (Asean) in 2012 but often regarded as a China-led counterpart to the Comprehensive and Progressive Agreement for Trans-Pacific Partnership (CPTPP), covers nearly one third of the world’s population and gross domestic product (GDP).

However, while membership of the Regional Comprehensive Economic Partnership (RCEP) will add incrementally to Chinese GDP, it will not be enough to cancel out the damage of the trade war with the United States, research showed.In June, researchers at the Peterson Institute for International Economics (PIIE) found that RCEP, a trade deal that took seven years to negotiate, would add 0.4 per cent to China’s real income by 2030, while the trade war would trim 1.1 per cent, should current hostilities persist.

It will make China much more integrated with the rest of Asia, and we need to look at what that might generate in the longer termRenuka Mahadevan.

A study conducted last year by researchers at the University of Queensland and the Indonesian Ministry of Finance found that RCEP would add just 0.08 per cent to China’s economy by 2030. Over the same period, the trade war would slice 0.32 per cent from its GDP.

Renuka Mahadevan, an associate professor at the University of Queensland who co-authored the 2019 report, said because of the dent made in the regional economy by the coronavirus pandemic, the benefit of RCEP might be more pronounced for signatories, since growth was coming from a lower base.

Nonetheless, she said the numbers were only “part of the story” for China, for which the agreement was about more than marginal growth gains.

“I do think it will help China a great deal. It will make China much more integrated with the rest of Asia, and we need to look at what that might generate in the longer term,” Mahadevan said, referring specifically to investment flows around Asia.

The PIIE study found that “China is poised to become the largest beneficiary of RCEP” in its current guise, which does not include India.

Nonetheless, authors Peter Petri and Michael Plummer predicted the deal would fail to offset the damage done by the trade war and the trade diversion caused by the rival CPTPP, particularly for light and advanced manufacturers.

Again though, they alluded to ulterior motives for China in getting the deal over the line.

“Even more important than economic gains, however, may be the effects of East Asia’s regional turn on China’s prospects for leadership in the region. The CPTPP and RCEP15 agreements, without the United States and India, remove powerful balancing influences in determining economic policies in East Asia,” they wrote, adding that the Asian trade sphere might become more China-centric as a result.

Researchers at the Beijing-backed Chinese Academy of Social Sciences (CASS) were slightly more bullish on the prospects of RCEP for China’s economy, estimating that over 10 years it would add 0.22 per cent to real GDP growth and 11.4 per cent to China’s total exports, should the schedule for trade liberalisation unfold as planned.

“RCEP will not only improve the external trade environment, but also provide a new growth driver for the Chinese economy,” wrote Shen Minghui and Li Tianguo in the CASS report.

Liang Yixin, a researcher with the China Centre for Information Industry Development, affiliated with the Ministry of Industry and Information Technology, estimated the trade agreement would add 0.04 per cent to economic output by 2025, or 1.95 per cent to export growth.

Nick Marro, global trade lead at the Economist Intelligence Unit, said while the impact on the wider Asian economy might be “marginal”, “there are some interesting trade and tariff dynamics to watch for Northeast Asia”.

“We’re seeing China, Japan and South Korea brought together under a free-trade agreement for the first time. Those markets will lend a bit more weight to the economic significance of the deal,” said Marro.

Finbarr Bermingham has been reporting on Asian trade since 2014. Prior to this, he covered global trade and economics in London. He joined the Post in 2018, before which he was Asia Editor at Global Trade Review and Trade Correspondent for the International Business Times.

Frank Tang joined the Post in 2016 after a decade of China economy coverage and government policy analysis.