Standing at a Crossroads: Economic Recovery Plans in EU Essential to Deliver Inclusive and Green Growth

Two years into a pandemic that has shaken the world, policymaking remains a delicate balance between protecting those who cannot always protect themselves, nurturing the recovery, and keeping debt at manageable levels.

The unprecedented policy support from EU institutions and member state governments throughout the pandemic has helped to cushion the worst impacts on employment and income. This, coupled with the rapid adaptation of firms and households to a ‘new normal,’ has helped to keep national economies afloat and societies running. Unemployment has remained in check and household incomes have been relatively stable thanks to a raft of firm support and social protection measures. Salary subsidies, generous leave allowances and debt holidays extended since early 2020 are just a few of the interventions that would, prior to the pandemic, have been unthinkable in the scale that we saw in 2020, blurring the lines between the public and private sectors. 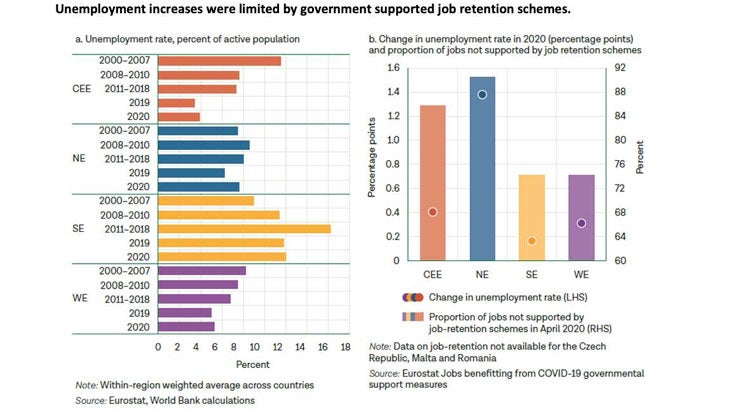 While the economic fallout could have been much worse absent the sizeable government support, it is also fair to say member states are not yet out of the woods. Despite government efforts, the threat of poverty is still very real for a segment of people living in the EU. Our recent report, entitled Inclusive Growth at a Crossroads​, found that a further three to five million people are ‘at risk of poverty’ in the EU27 countries today than before the crisis. Europe is in its steepest recession since World War II, with output across the EU shrinking by more than six percent in 2020.

Green shoots of recovery are beginning to emerge as governments reopen national economies. EU member states must now ensure careful and efficient implementation of economic recovery plans that support inclusion, protect the vulnerable and foster economic growth to bounce back.

Beyond the far-reaching fiscal strategies, monetary policy programs have complemented efforts as central banks have worked to ensure favorable financing conditions and ample liquidity in the banking system. While this has kept debt servicing costs at bay, it has still come at a cost. Notably, debt-to-GDP increased by 13 percentage points on average in 2020 across the EU27 – a steeper increase than during the global financial crisis of 2008.

At the human level, the realities of the pandemic have been highly unequal, and in a way not seen in previous financial crises. Sectors of the economy that are typically less sensitive to business cycles – like entertainment, the arts and accommodation – were severely affected as social distancing limited human interaction. Meanwhile, sectors that are typically more procyclical, such as industry and construction, were less affected despite an economic contraction.

Within the EU27, there is evidence of rising inequality in multiple areas that will need to be proactively addressed by strengthening service delivery and tailored labor market programs to reduce potential scarring. For example, in the labor market, low-wage workers, the self-employed, young people, and those on non-standard contracts were more likely to experience lasting disruptions to their work. This threatens to echo through future generations as the disruptions to schooling could exacerbate existing inequalities by limiting opportunities and suppressing the incomes of tomorrow’s workforce. Parents in poorer households are more likely to report that their children have experienced difficulties with the transition to online schooling. Proactive support to children at risk of early dropout and those whose learning has been most compromised will be needed as the new school year sets in.

Since the turn of the year, the vaccination rollout in the EU27 countries has provided a cause for optimism and improving the prospects for recovery. Supportive monetary and sustainable fiscal policies will still be required to carefully balance the support targeted to those that need it most. The EU’s recovery plan is an opportunity, aimed at putting the member states on a more sustainable path. This would include repairing the damage from the COVID-19 crisis, while promoting and accelerating the green and digital transitions. 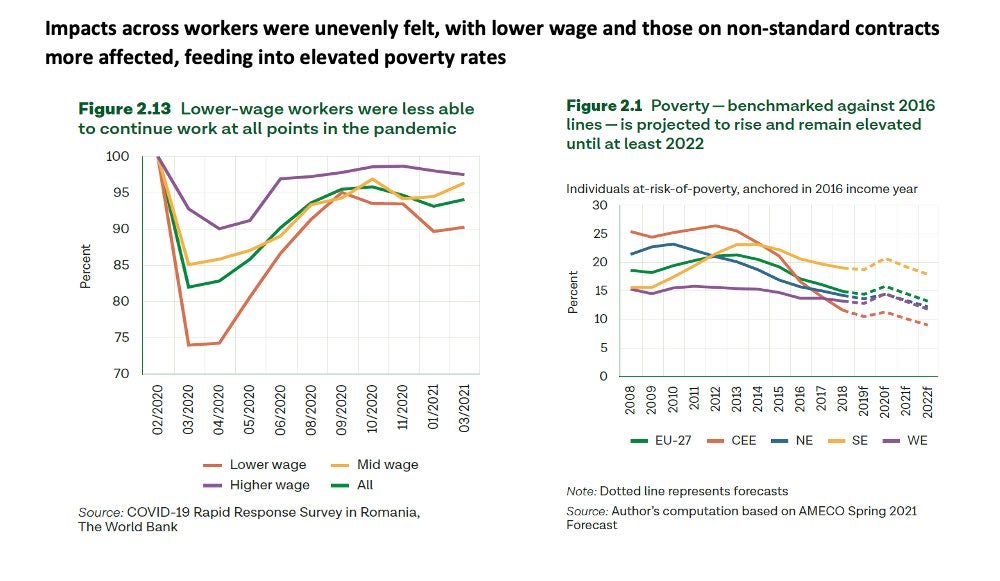 Countries are now at a crossroads as they deal with the aftermath of a difficult eighteen months. And while the pandemic challenge is not yet over, there are glimmers of hope that allow populations to look forward to gradual reopening with cautious optimism. As pressures related to the pandemic ease, countries have the opportunity to pivot towards more sustainable growth with a renewed focus on fostering resilience and cohesion.​

Gallina A. Vincelette is the World Bank’s Country Director for the European Union (EU), based in Brussels, Belgium. She is responsible for guiding the Bank’s operational and knowledge engagement with client countries and the EU institutions.

Reena Badiani-Magnusson is a Senior Economist at the World Bank. She has worked on social protection, human development and poverty issues over the past 9 years at the World Bank in several countries across Europe and Central Asia, East Asia and the Pacific and Africa. Reena holds a PhD from the Department of Economics at Yale University. She additionally holds a Masters in Environmental Economics from the MPSE in Toulouse University.