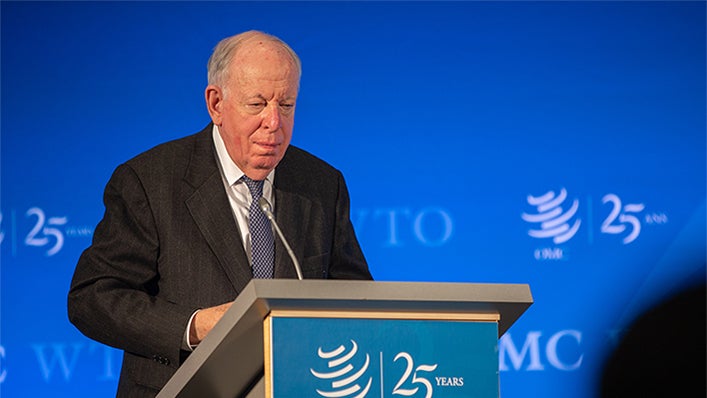 Below are Deputy Director-General Wolff’s comments to the G20 Leaders’ Summit on November 21.

“Thank you very much, Your Royal Highness, and I thank Saudi Arabia for its leadership.

“With respect to trade, there are three immediate challenges: to utilize trade to help underwrite the economic recovery, to facilitate trade in essential medical products to treat the pandemic, and to reform the institutional framework for world trade.

“First, trade finance for the developing world needs to be restored. The sum needed is very large, in the trillions of dollars. This step has been called for by business and by all the major international development banks along with the WTO. This is not just a development issue. When crops do not move and factories are idled throughout the developing world, the global recovery will be delayed for all. Close co-operation among the international financial institutions, the WTO and the large commercial banks will be needed. A trade finance initiative should be seen as an essential part of improving the outlook for economic recovery.

“Second, it is time for WTO Members to come together to agree on and implement measures to speed the supply of essential medical products worldwide to where they are needed.

“Global trade in pharmaceuticals should be duty-free under an updated Pharmaceutical Agreement.

“Medical equipment should be duty-free in an immediate update of the Information Technology Agreement.

“As new vaccines, therapeutics and diagnostics start to be rolled out, barriers at borders must be reduced, with an international understanding limiting the use of export restrictions, providing for much greater transparency and accelerating improvements in trade facilitation efforts, particularly for the poorest countries.

“Third, and last, the identification of areas of common interest achieved by the Riyadh Initiative on the Future of the WTO should result in immediate serious engagement by WTO Members in a major institutional reform effort. This would involve restoring the WTO’s deliberative and negotiating functions, providing binding dispute settlement seen as legitimate by all and providing for a strong proactive Secretariat. The WTO’s 12th Ministerial Conference next year will be an important landmark for this work. In actively engaging in the reform effort, G20 Members can contribute immeasurably to fulfilling the vision held by the founders of the multilateral trading system seven decades ago and the WTO a quarter century ago.

The G20 Leaders Summit is taking place virtually on November 21-22. The results of the Summit will be released later today. While a positive picture on agreed actions by the G20 will be presented, it is hard to imagine the G20 actually embracing the objectives/needs outlined by DDG Wolff.

For example, while it is likely that the G20 will lend support to a trade finance initiative to assist developing countries, the size of the initiative that is actually supported may be far less than the ambitious levels (trillions of dollars) identified as needed by Deputy Director-Wolff.

Similarly, while there is support in some quarters (e.g., the EU) for some of the trade liberalization initiatives identified in DDG Wolff’s second item, it is hard to see WTO Members being willing to reach consensus quickly on any of the three initiatives outlined. Certainly, the Pharmaceutical Agreement should be updated; how long that takes to accomplish is another issue and is unlikely to occur in a timeframe relevant to the COVID-19 pandemic. So too it is unlikely that WTO Members will quickly agree to duty free treatment of medical equipment whether under the Information Technology Agreement or otherwise, although countries needing to import such equipment have to a limited extent unilaterally reduced or eliminated duties during the pandemic. Such voluntary and temporary reductions seem the more promising short term solution. Finally, while individual countries have adopted trade facilitating/streamlining actions to speed the movement of medical goods and the WTO’s notification process has provided fair transparency of government actions, it is unlikely that there will be a quick agreement on limiting the use of export restrictions. There could be agreement on improved transparency and the WTO could work with LDCs and others to help them implement trade facilitation steps useful in speeding movement of medical goods.

On the third objective, “a major institutional reform effort,” while the G20 will undoubtedly support such action and support at least two of the three stated core planks — “restoring the WTO’s deliberative and negotiating functions, providing binding dispute settlement seen as legitimate by all” — the huge differences in objectives/concerns of many of the G20 countries makes any rapid movement towards reform in fact unlikely. For example, the United States, at least under the Trump Administration, has pushed for a fundamental rebalancing of rights and obligations in light of changed economic circumstances, pushed for a determination on whether the organization can function with very different economic systems under a set of rules designed for one type of economy, is seeking a restoration of the limited role envisioned for the WTO dispute settlement system and for panels and the Appellate Body. China has different objectives and opposes most of the U.S. priorities. The EU has very different views from the United States on the dispute settlement system. Thus, even before one looks at the broader WTO Membership, these three major Members have very different views on reform that will make efforts at reform at least time consuming (years not months). DDG Wolff includes in his list of reform efforts “providing for a strong proactive Secretariat.” This is an objective that has been stated by one or more past Directors-General, but it is unclear that there is strong Member support for a stronger Secretariat. Considering the U.S. concerns with the Appellate Body, it is hard to see them wanting a stronger Secretariat at the expense of Members. Indeed, WTO Members have frozen the WTO budget for years, and India has been seeking a reduction in budget resources for the WTO (10% cut has been proposed). The U.S. has also raised questions about Secretariat actions that appear outside of the agreed role of the Secretariat.

The G20 can have and has had an important role in limiting some of the more harmful actions of both G20 countries and of others in time of crisis. The G20 efforts to mobilize agreement on ways to keep markets open, limit market restrictions and support global initiatives to help smaller and more vulnerable countries has been and will continue to be important to reduce the depth of economic contraction and speed of economic rebound. And, of course, the G20 efforts go far beyond trade.

It has been important that the G20 has been open to receiving input from various organizations, including the WTO. The G20 has the ability to act fairly quickly where there is agreement among the countries. On trade, there are some major differences among G20 members not only on WTO reform but also on the need for existing WTO options for temporary export restrictions and willingness for providing greater transparency or to reach quick agreement on trade liberalization actions. Some G20 members have proposed broader WTO actions, and such actions may very well occur in the coming years although whether in time to alter the reality in the field during the COVID-19 pandemic is unlikely. Voluntary actions are obviously available in terms of reducing import restrictions including tariffs on medical goods and medicines/vaccines, and a number of countries have adopted streamlining actions to speed movement of medical goods during the pandemic.

Deputy Director-General Wolff’s statement to the G20 Leaders Summit contains important possible actions that the G20 could take or support. Some support from G20 members will almost certainly be forthcoming. Unfortunately, G20 action will not likely result in complete adoption of DDG Wolff’s proposals, nor will G20 action likely permit rapid implementation within the WTO or other organizations of DDG Wolff’s proposals. But it is useful to have a picture of a highly desirable future even if the audience for the message is unlikely to rise to the occasion for the global good.