Blogs > Circular Economy: How Is It Defined And How Should It Be Defined?

Circular Economy: How Is It Defined And How Should It Be Defined?

We are kicking off our exploration of the circular economy and the role of trade policy as a catalyst, but let’s first start with the basics. The circular economy moves away from the “make-use-dispose” model to proactively reintegrate used products and materials into productive commerce via a ‘reverse’ supply chain that extracts materials from society rather than mines, thereby preserving the planet from resource extraction and the excess emissions that come along for the ride. This also means there is a conscious approach to manufacturing that considers both post-use management (e.g., recyclability) and the use of recycled materials in production in the ‘forward’ supply chain, which both deliver on the circular economy goal of resource preservation while also empowering communities through localized economic growth, jobs creation, environmental justice, innovation, and social awareness of the consumption/environmental nexus.

The good news is that everyone is talking about the circular economy, and they are guided by its intuitive basics. There is a growing volume of work on the circular economy that adopts the same simple concept but approaches it with variety. The World Economic Forum and Ellen McArthur Foundation are preeminent conveners that combine the power of different stakeholders to generate action-oriented initiatives already making headway. The European Union is redesigning policies to create an “insular” circular economy based on self-sufficiency and working to convince others to take on that approach. The U.S. EPA announced a National Recycling Strategy in November 2021 as the first stage “to building a circular economy,” superseding a long-standing “Sustainable Materials Management” agenda in which recycling (i.e., the circular economy) is not necessarily the answer to post-use management.

With any policy work, we need a definition.The concept of the circular economy – as it grows in concept, reference and eventually action – seems simple, but there are several definitions (or attempts at definitions) that are true but wordy. Let’s take a look at some of the more prominent definitions: 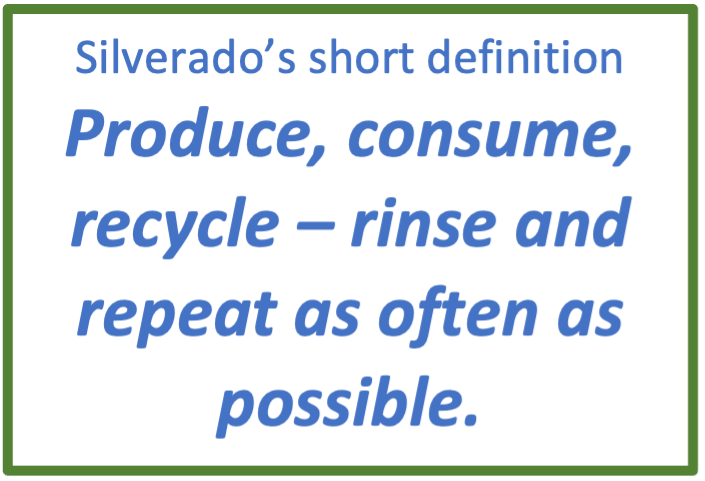 Over the course of the coming months, we will be dissecting the components of the circular economy and these different approaches to make sure we fully understand what it means but, especially, how we get there. In line with our mission, we are asking questions and developing policy ideas to transform into action under the banner of the Eco2Sec pillar – addressing economic and ecological risk and opportunity to meet the 21st century climate imperative – while also promoting trade policy as an enabler of the Circular Economy (Trade & Industrial Policy pillar). Watch this space and engage with us.