Does trade policy really matter? Britain’s protectionism in the 1930s may offer insights for policymakers today.

Political and economic instability in the US and Britain have led to a renewed focus on the importance of trade deals.

President Trump has criticized multilateral trade agreements and argued for re-negotiating deals to get more favorable terms for the US. Britain has struggled for more than two years to manage its exit from the European Union, with many of the intricate details revolving around Britain’s future trading status with the EU.

It might be surprising to learn, then, that trade economists have come to question whether trade policy really matters.

“Everybody [economists] agrees that protectionism is a bad thing,” said Kevin O’Rourke, an economic historian at Oxford, in an interview with the AEA. “But when you try to quantify it, you often end up finding that it didn’t matter very much.”

However, trade policies mattered a great deal for who Britain was trading with, if not the amount it was trading, according to his paper published in the February issue of the American Economic Review.

O’Rourke and co-authors Alan de Bromhead, Alan Fernihough, and Markus Lampe argued that if there’s any time in history when trade policy was important, it was in the 1930s. So that’s where they started looking.

At the turn of the 20th century, Britain was considered pro-free trade, at least by the standards of the day. But after World War I and the Great Depression, Britain came to see protection for itself and, secondarily, the dominions of its empire as critical.

“Everybody [economists] agrees that protectionism is a bad thing. But when you try to quantify it, you often end up finding that it didn’t matter very much.” – Kevin O’Rourke

As a consequence, many new tariffs were raised on foreign imports in the early 1930s. Tariffs were as high as 50 percent, and quotas were introduced on everything from British films to frozen mutton.

Around the same time, global trade—including Britain’s—collapsed. Previous studies found that the new trade barriers weren’t really responsible. Falling incomes and expenditures, due to the Great Depression, appeared sufficient to explain most of the drop in overall trade flows.

The authors confirm this in their study. They found that protectionist policies can only account for about one-quarter of the decline in UK imports between 1929 and 1931, which is not negligible according to O’Rourke, but is of secondary importance compared to the economic disruptions of the time.

What sets the authors’ research apart from previous studies was the data they collected from the UK’s statistical offices, which they cleaned to make product categories consistent over time. This detailed, standardized dataset allowed them not only to look at Britain’s overall trade, but also the flow of 258 different goods, with product-specific protections, from forty-two different countries.

Analyzing the new, fine-grained data revealed that the geographic pattern of British trade had been significantly altered over the 1930s. Britain became much more dependent on imports from its imperial dominions, such as Canada and India. The UK’s share of imports from its empire increased from less than 30 percent to more than 40 percent.

The reason appeared to be that, while Britain was raising tariffs and quotas on the rest of the world, its imperial dominions managed to carve out major exceptions, especially during the Ottawa negotiations of 1932.

Because of this preferential treatment, trade protections accounted for roughly two-thirds of the increased share of imperial imports between 1930 and 1935.

Made in the UK

The chart below shows Britain’s actual share of imperial imports, as well as the counterfactual shares that would have been obtained had the UK not changed its trade policies after 1930. The percentiles are based on one thousand simulations from the authors’ model. 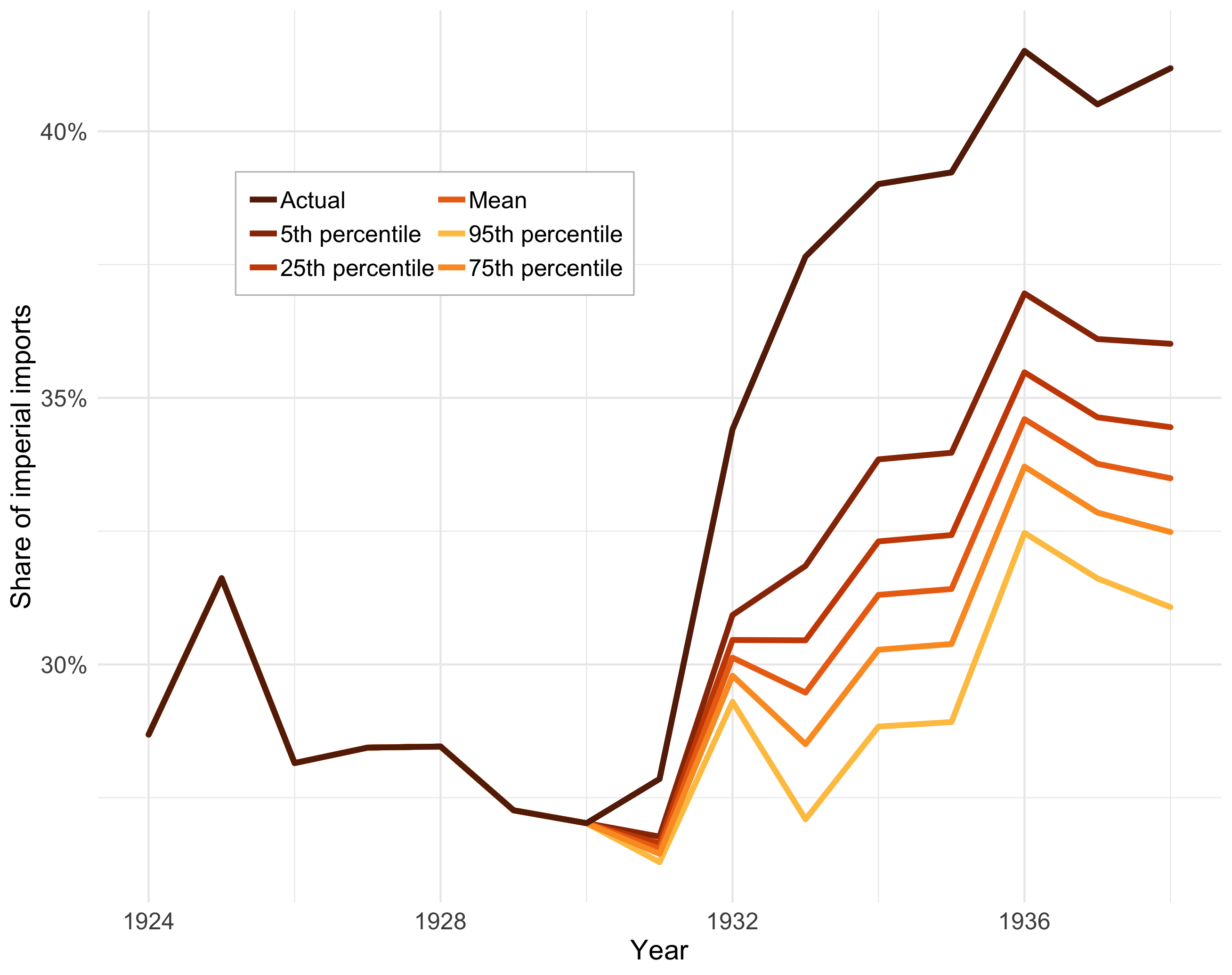 O’Rourke said while he believes trade discrimination could have harmed British consumers, the political fallout on the international stage may have been more consequential.

The interwar period serves as a reminder to policymakers that trade and peace are not inevitable.

“If people stop believing that they can depend on the market to provide them with what they want . . . then you can get very dangerous and violent reactions,” O’Rourke said.

“When Britain Turned Inward: The Impact of Interwar British Protection” appears in the February issue of the American Economic Review.

Tyler Smith is an Economics Writer at American Economic Association.