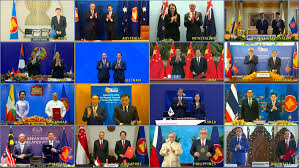 The U.S. has shied away from ambitious multilateral pacts in recent years — a stance that might not dramatically change under President-elect Joe Biden. Over in Europe, the U.K. and European Union are running out of time to seal a post-Brexit deal.

Enter RCEP, the world’s biggest trade pact covering about 30% of global gross domestic product and population. Once it comes into force, the signatories — the 10 members of the Association of Southeast Asian Nations plus China, Japan, South Korea, Australia and New Zealand — can expect a host of new business opportunities.

The pact will create a huge Asian economic bloc, with common rules and standards governing not only trade of goods and services but also cross-border investment and e-commerce. This promises to help members grow their own economies while making the region even more attractive to the rest of the world.

“Intra-Asian trade, which is already larger than Asia’s trade with North America and Europe combined, will continue to power global economic growth and pull the economic center of gravity towards Asia,” Stuart Tait, regional head of commercial banking for Asia-Pacific at HSBC, said in a note.

Especially as Asia emerges from the COVID-19 pandemic, RCEP gives American, European and other global companies a fresh reason to invest on this side of the planet.

Thai Prime Minister Prayuth Chan-ocha touched on this at the RCEP summit, saying the pact would create a business environment that is conducive and attractive to investors from around the world, according to a government spokesperson.

After the signing, businesses in the 15 countries broadly applauded the deal.

“For the Japanese automotive industry, which operates on a global scale, the RCEP agreement systematically supports the creation of an advanced value chain in the Asia-Pacific region,” he said. Sichuan Hongmeng Zhongtuo Automobile Trading is one Chinese company banking on benefits, according to a Sichuan Daily report on Monday.

The company is among five competitors in Sichuan Province selected for a pilot project to export used cars. “Southeast Asia used to have the highest import tariffs on secondhand cars in the world,” said general manager Li Chuan. “With the implementation of RCEP, Southeast Asia is expected to become the largest export market of used cars for China.”

The mood is similar in Singapore.

Ho Meng Kit, CEO of the Singapore Business Federation, noted that once RCEP kicks in, the city-state’s companies will “enjoy greater flexibility in sourcing from a larger pool of suppliers in the region.”

The U.S. is on the outside looking in — again — posing questions for Biden

In 2017, Donald Trump pulled the U.S. out of the Trans-Pacific Partnership, setting a protectionist tone that persists to this day. Now comes RCEP. Can the U.S. expect to grow its presence in the Asian economy without participating in either of the region’s two massive trade pacts?

This is one of the questions Biden will face when he moves into the Oval Office.

“A potential trade policy issue for the next U.S. administration is that the implementation of RCEP will leave the U.S. outside of both RCEP and CPTPP,” said Rajiv Biswas, Asia-Pacific chief economist at IHS Markit, referring to the Comprehensive and Progressive Agreement for Trans-Pacific Partnership — the 11-member version of the TPP.

Trump’s stance proved to be a motivator for RCEP parties to advance their talks. Meanwhile, the platform of Biden’s Democratic Party states that it will not negotiate any new trade deals before first investing in American competitiveness at home. U.S. President-elect Joe Biden’s Democratic Party has pledged not to negotiate new trade deals before investing in American competitiveness at home — suggesting he might not veer too far from President Donald Trump’s stance. (Source photos by Reuters)

Jeffrey Halley, senior market analyst at Oanda, suggested that by signing RCEP, Asian countries have proved something to themselves. “The fact that the agreement got over the line after eight years of negotiation, between a widely disparate group of nations, is an achievement in itself,” Halley said. “That has left the Asia-Pacific with a feeling that there is life in the world, with or without the U.S.”

Of course, even if their government keeps its distance, U.S. companies can still benefit from RCEP in their Asian operations. For China, Japan and South Korea, in particular, RCEP is a major milestone. For the first time, East Asia’s big three economies will be connected by a free trade agreement.

Tariffs on 86% of Japanese goods exported to China will be eliminated, for example, up from the current 8%. This promises big benefits for Japanese manufacturers, such as automobile parts suppliers.

China’s Ministry of Finance said in a statement that “China and Japan have reached a bilateral tariff reduction arrangement for the first time, marking a historic breakthrough.” The ministry said countries are creating an environment that “is conducive to promoting a high level of trade liberalization within the region.”

For ASEAN, which already has free trade within the bloc as well as deals with other countries, RCEP will have less of an impact on tariffs. But it is still a big win for the association, which has bucked the trend of global protectionism and spearheaded the drive to conclude the agreement.

“ASEAN has played a critical role in this journey,” Singaporean Trade and Industry Minister Chan Chun Sing told reporters on Sunday. “Its leadership as a trusted and neutral group has enabled our partners to come together in an unprecedented way and cooperate under the umbrella of RCEP.”

There are still hurdles ahead

After the signing, individual members still need to ratify RCEP. The deal will only take effect after at least six ASEAN states and three non-ASEAN ones complete this process. It could take some time, even in countries that move fast.

Singapore’s Chan said he expects his country will ratify it in the next few months. Indonesia’s process will start with the translation of the lengthy document. “Hopefully in the next two months, we can finish the translation … to be submitted to the president and the [national assembly] for ratification,” Imam Pambagyo, general director of international trade negotiation at Indonesia’s trade ministry, told the media on Sunday.

Some countries might take years to get the job done, according to Nick Marro, lead analyst for global trade at the Economist Intelligence Unit.

“Ratification will likely be tricky in national parliaments, owing to both anti-trade and anti-China sentiment,” he said in a note issued on Monday. “That’ll be one of the unintended consequences of China’s more aggressive foreign policy tilt from over the past year. It might range from at least several months to several years until the deal becomes effective.”

In other words, RCEP members may not reap the benefits as quickly as they expected.

Another challenge will be bringing India back into the fold. Asia’s third largest economy was originally involved in the talks but pulled out last year, as it was wary of hurting its local businesses and farmers.

Additional reporting by CK Tan in Shanghai, Ismi Damayanti in Jakarta and Masayuki Yuda in Bangkok.

Kentaro Iwamoto is a staff writer as Nikkei Asia.