Kazakhstan, a landlocked nation located in the Eurasian region, relies on neighbouring nations like Turkmenistan (gateway to Iran and Afghanistan), Russia (gateway to Europe) and Uzbekistan (gateway to Tajikistan and Turkey) as gateways for trade. Though land routes are considered to be economically effective for small cargo, the same is not true for heavy oversized cargo due to tonnage and bridge limits. Therefore, Northern Sea Route is being seen as a viable alternative by Kazakhstan, considering the limitations posed by the land routes.

In his article, titled “Kazakhstan Looks for a New Arctic Trade Route”, Malte Humpert argues that Kazakhstan is exploring the Irtysh-Ob river system as an option to gain access to the world’s oceans through the Arctic. For this, Kazakhstan has sought to utilise the navigation potential of the Ob-Irtysh River, a transnational river connecting China, Kazakhstan and Russia to Sabetta Port in the Arctic region of Russia. Irtysh is the largest tributary of the Ob River (2,640 kms long), which originates in the Chinese Altai Mountains and flows northwest towards eastern Kazakhstan. Irtysh meets the Ob at the Khanty-Mansiysk area of Russia before flowing into the Arctic Ocean near the Yamal Peninsula.

Crucially, Russia has used the river’s inland water system for its transportation needs since the Tsarist period. During the Soviet era, this river system was an important transport link in the development of Western Siberian oil and gas complex (WSOGC). The cargo transportation through the river increased from 6.3 to 18.5 million tons during the 1950–60s.

Post the collapse of the Soviet Union, transportation of cargo through the river reduced.  However, the potential to revive inland cargo transportation has found a new lease after Russia formulated its Arctic Policy in 2008.  The policy focusses on the use of the Russian Arctic Zone as a strategic base with emphasis being placed on the Northern Sea Route being the single focal point for transport and communication, etc.

Interestingly, Kazakhstan has shown promise in the revival of the Northern Aral Sea thereby showing that it understands the importance and the potential of water navigation.

Today, Irtysh is one of the few rivers where shipping is possible and river transport is developed. The presence of Kazakhstan’s four main ports—Pavlodar, Semey, Ust Kamenogorsk and Bukhtarminsky—on the Irtysh further enhances its prospects for inland transport (Map 1). The four river ports have the necessary infrastructure for intermodal transportation in terms of mechanised handling capacity and storage facilities. Pavlodar has the capacity to handle 13.2 thousand tonnes per working hour, having two berths—one of cargo length (650 m) and the other for passengers (120 m). This highlights the capability of Pavlodar port which would act as one of the main ports for the Arctic route from Kazakhstan. 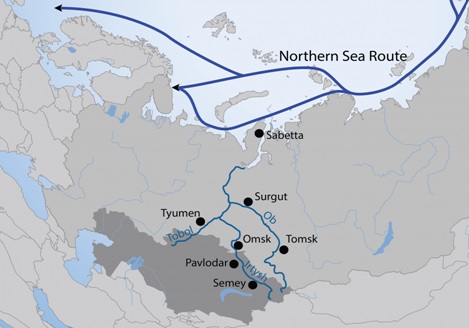 Map 1. The Proposed Trade Route for Kazakhstan using the Irtysh River and the inland Kazakh Ports. River Irtysh originates in China, and flows towards Semey and Pavlodar in Kazakhstan. It joins Ob River in Russia that finally terminates at Sabetta port.

When it comes to the Arctic, Russia is the undisputed military and economic superpower. Therefore, Kazakhstan, which has a robust partnership with Russia particularly in the economic and security fields, is likely to benefit from engaging Russia in gaining access to the Arctic through Russia. This could open up new economic opportunities for Astana.

The Ob-Irtysh river system penetrates deep into the heart of Eurasia thus offering Kazakhstan an opportunity for direct access to ocean trade lines. The river transits through Russia’s Sabetta Port which opens up to the Kara Sea and the Arctic Ocean, providing access to the European and East Asian markets.

While the existing land trade routes are likely to be more competitive, yet an Arctic maritime route could act as an alternative in the event of a blockade.  The feasibility of the project from Russia to Kazakhstan was successfully tested in 2016 by transporting two large chemical reactors, each weighing more than 600 tons, from South Korea to Kazakhstan’s Pavlodar Port using the Northern Sea Route and the inland Ob-Irtysh river system (Map 2). Today, Sabetta Port, the largest port on the Northern Sea Route, has seen its cargo handling capacity grow more than five-fold.15

Map 2. The trade route which was used for shipping of the chemical reactors from South Korea to Kazakhstan in 2016.

Since the main focus of Kazakhstan’s foreign policy concept on water resources and water security has been China, it solidifies its relations with China and ensures that it provides further space for diplomatic engagement between them. China and Kazakhstan share a cordial relationship. The two nations share two rivers Ili and Irtysh, both of which originate in China and then flow into Kazakhstan. China also accounts for the highest water flowing from abroad into Kazakhstan. This is equal to 18 per cent of the Kazakhstan’s total water availability. In 2014, Kazakhstan advocated a foreign policy concept which stated “to continue to improve the legal framework with neighbouring countries on the usage and protection of Trans boundary water resources to enhance water security and water saving” with particular focus on China.

China also happens to be Kazakhstan’s second largest trading partner and a key pillar of the Belt and Road Initiative (BRI). It has been heavily involved in constructing its biggest dry port at Khorgos connecting Kazakhstan with China through rail. With the river associated with the Arctic trade route emerging from China, Kazakhstan is likely to need the support of the upper riparian state, i.e., China to implement the connectivity project.

The flipside regarding the Kremlin’s assistance is that the maritime cooperation is likely to provide Russia with more tools to involve itself in Kazakh affairs.  Similarly, China’s treatment of Uighur Muslims in bordering Xinjiang remains an issue of concern for Kazakhstan. While Astana has largely remained silent on this issue, its temporary refuge to four convicted ethnic Kazakh Chinese citizens from Xinjiang in 2020 could act as a bone of contention in the future. The fact remains that several ethnic Kazakhs have been detained in Chinese re-education camps in Xinjiang.

Kazakhstan is exploring alternative trade routes to enhance its economic potential. An Arctic route anchored in in-land waterways could open up Kazakhstan to the rest of the world. The involvement of Russia and China in this alternative route, while crucial for its success, may come at a price.  In order to maintain a semblance of balance in its ties with its two key strategic partners, Kazakhstan would perhaps have to leverage its geo-strategic importance for both Moscow and Beijing to navigate the new Arctic route.

Mr Jason Wahlang is a Research Analyst in the Europe and Eurasia Centre at MP-IDSA, New Delhi.