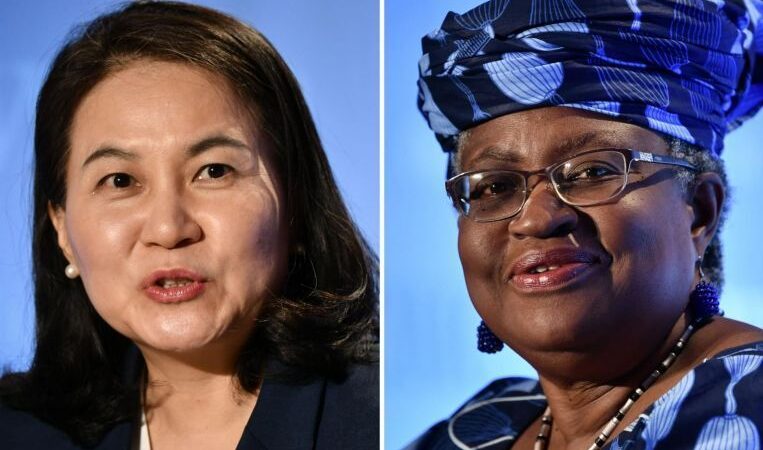 The informal Heads of Delegation meeting at which Amb. David Walker (new Zealand),who is the Chairman of the General Council and his facilitators (Chairs of the Dispute Settlement Body and of the Trade Policy Review Body), will announce to the WTO membership which two of the five remaining candidates have advanced to the final round of consultations in the search for a new Director-General is scheduled for 11 a.m. Thursday morning (October 8). However, just as after the first round of consultations, the results have been leaked to the press by one or more Members.

Based on news stories this afternoon, Dr. Ngozi Okonjo-Iweala of Nigeria and Minister Yoo Myung-hee of the Republic of Korea are the two candidates who will advance to the third and final round of consultations. Minister Amina C. Mohamed of Kenya, Minister Mohammad Moziad Al-Tuwaijri of Saudi Arabia and the Rt Hon Dr. Liam Fox MP of the United Kingdom will not advance and are expected to withdraw.

As reviewed in prior posts, Minister Yoo has had active support in her candidacy from the Korean administration and had achieved success in being one of two preferences put forward by a united European Union earlier this week. Minister Yoo’s career has been in trade throughout and she is the first woman Minister for Trade in Korea. Dr. Okonjo-Iweala has been finance minister of Nigeria twice, served 25 years at the World Bank rising to the number two position and has had an important position with GAVI in recent years.

There has been much discussion of whether this selection of a Director-General would result in a woman being selected — which appears to now be a certainty — and which would be a first for the WTO. Similarly, African Members have been arguing that the position should go to an African candidate since Africa has never had a Director-General from the continent. Asia has had one Director-General in the WTO previously, but never a Korean. Minister Yoo is the third Korean trade minister to run for the Director-General post in the WTO’s short history.

It is unclear if WTO Members from Africa put forward their preferences in a uniform manner to support both African candidates who were part of the round two consultations. Some press articles have suggested that other candidates received at least some support from individual African Members. It is known that Dr. Okonjo-Iweala and Minister Mohamed had support from different groups of African countries — ECOWAS and EAC respectively.

The third round of consultations will have WTO Members looking at very different candidates in terms of backgrounds and perceived strengths. Minister Yoo’s background is entirely in trade and she is from an important trading nation and has negotiating history with many of the major WTO Members. Dr. Okonjo-Iweala is highly regarded, has limited trade experience (as Minister of Finance she had responsibility for Nigeria’s customs service), has deep experience in development economics and with efforts to respond to the needs of developing and least developed countries in terms of access to medical goods, including vaccines and therapeutics. While Nigeria is a large country, it is a significantly smaller trading nation than Korea. Korea is the 7th largest exporter of goods in 2019 ($542 billion) and 9th largest importer while Nigeria was 48th largest exporter ($62 billion) and was not in the top 50 importers.

Both remaining candidates are very talented and would make an interesting choice for the next Director-General. Block voting by the EU certainly was a help to Minister Yoo in her quest to advance to the third round. It will be interesting to see if the EU, the African Members or other groups vote in blocks in the third round.

The three candidates who will not move to the third round were also all very talented individuals who would have brought different skills and perspectives to the job if they had ultimately been selected.

We will learn tomorrow the timing of the third round of consultations.