Poverty and food insecurity could grow dramatically as COVID-19 spreads

Cases of COVID-19 worldwide have grown exponentially since our previous analyses of the pandemic’s impacts on global staple food markets and poverty and hunger. On March 10, the number infections had just passed 110,000 with about 4,000 deaths. In the month since, the number of people with COVID-19 has increased 20-fold (to over 2 million) and the number of deaths more than 30-fold (to over 135,000). The epicenter of the pandemic shifted from China to Europe and then to the United States. The coronavirus is now spreading rapidly in low- and middle-income countries, many of which lack robust health systems or strong social safety nets that can soften the pandemic’s public health and economic impacts.

More than half of the world population is currently under some form of social distancing to contain the health crisis. As a result, millions of businesses have had to close shop. The ILO anticipates 200 million workers could be thrown into unemployment. In the U.S. alone, virtually overnight, 22 million people lost their jobs in early April. Governments in Europe and the U.S. have promised unprecedented fiscal and monetary stimulus measures to compensate for the income losses of businesses and workers and contain an inevitable economic crisis. But the relief responses of low- and middle-income countries have thus far been more limited.

With COVID-19 and its economic fallout now spreading in the poorest parts of the world, many more people will become poor and food-insecure. In a new scenario analysis, we estimate that globally, absent interventions, over 140 million people could fall into extreme poverty (measured against the $1.90 poverty line) in 2020—an increase of 20% from present levels. This in turn would drive up food insecurity. A global health crisis could thus cause a major food crisis—unless steps are taken to provide unprecedented economic emergency relief.

While considerable uncertainty surrounds the outcome, the world is very likely to face a deep recession in 2020—at least as severe as the one following the global financial crisis of 2008-2009. A steep downturn has already set in in Europe and the U.S. Even assuming a strong rebound in the second half of the year on the back of unprecedented economic stimulus measures in the U.S. and Europe, the economic damage in major developed countries for 2020 is likely to exceed that of the Great Recession.

Using IFPRI’s global model, we examined some of the likely impacts of the downturn for poverty worldwide and regionally.

Under the assumptions (see box below), we project a downturn in global economic growth of 5% in 2020. This projection is broadly similar to the recent IMF forecast, which shows a downturn of the world economy from the 2%-3% growth anticipated pre-pandemic to an actual decline of 3%.

Our scenarios, however, indicate the poorest nations face significantly greater adversity. The recession that has already started in Europe and the U.S. is projected to depress economic activity across developed countries by 6% on average in 2020, despite an expected rebound later in the year as social distancing measures are lifted and stimulus measures take effect. This recession will spill over to the rest of the world through lower demand for trade and lower commodity prices. Developing economies will be hurt by the economic fallout caused by their own social distancing measures and by increased morbidity affecting the labor supply for farming and other business activity. 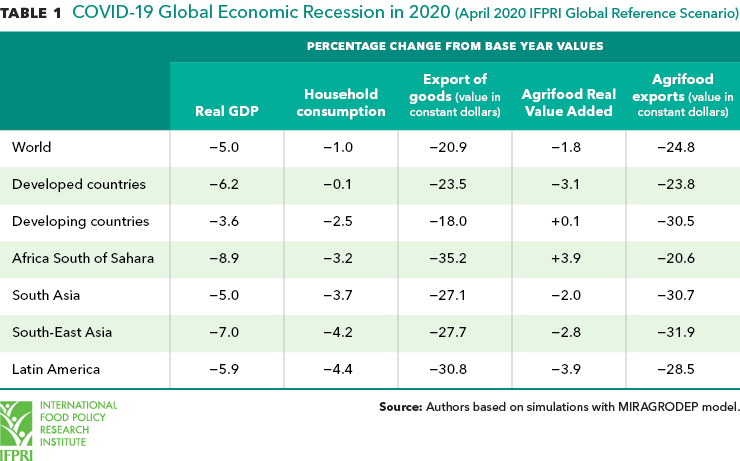 For developing countries as a group, the economic fallout would lead to a decline of their aggregate GDP of 3.6%, but economies in Africa south of the Sahara, Southeast Asia and Latin America would be hit much harder due to their relatively high dependence on trade and primary commodity exports. The recession is expected to be less severe in China and the rest of East Asia, where we expect the economic recovery to start sooner with the earlier lifting of containment measures.

We expect economies in Africa to be hit hardest (almost a 9% decline). But agri-food sectors may be spared and expand, as the collapse in export earnings and loss of capacity to import food push up domestic production. Lower labor demand in urban service sectors may push workers to return to agriculture, also contributing to greater domestic food production. With more workers in the sector, however, individual incomes would remain low.

Without social and economic mitigation measures such as fiscal stimulus and expansion of social safety nets, the impact on poverty would be devastating. (The scenario does not consider any such responses, as yet.) In addition to the 20% global increase in extreme poverty noted above, the scenario indicates urban and rural populations in Africa south of the Sahara would suffer most, as 80 million more people would join the ranks of the poor, a 23% increase. The number of poor in South Asia would increase by 15% or 42 million.

As these estimates refer to the extreme poor, i.e., those who typically lack sufficient means to buy enough food, we expect a commensurate rise in the number of food-insecure people. 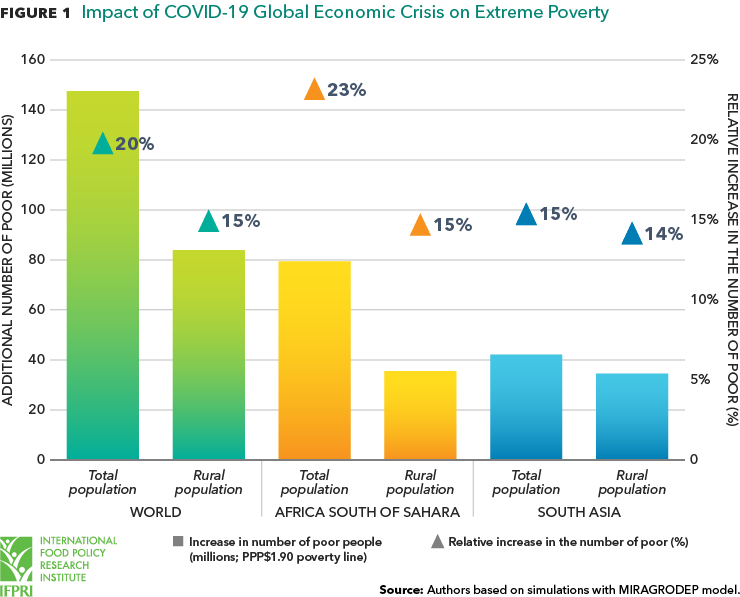 Heading off this dire outcome—a potential massive increase in global poverty and hunger—calls for an unprecedented policy response. High-income countries and international organizations should work to provide low- and middle-income countries with the necessary fiscal space and import capacity to expand health and social protection programs, strengthen food supply chains, and ensure adequate and affordable food supplies. Honoring the multiple calls for official and commercial debt relief would also help.

But even these measures are unlikely to be enough. There should also be concerted efforts to keep trade channels open to avoid piling an unnecessary food price crisis on the current health and economic disasters facing the world. We have developed a tracker to monitor these potentially damaging policy measures. In addition, large amounts of fresh, additional, low-conditionality funding will be needed to stave off a large-scale food crisis and invest in resilient food supply chains.

Detailed results of the scenario analysis can be found here. In the coming weeks we will conduct further scenario analyses to identify needs for and impacts of mitigating action.

David Laborde and Will Martin are Senior Research Fellows with IFPRI’s Markets, Trade, and Institutions Division (MTID); Rob Vos is the Director of MTID. The analysis and opinions expressed in this piece are solely those of the authors.