Blogs > The Aircraft Trade War Makes Even Less Sense in 2020

The Aircraft Trade War Makes Even Less Sense in 2020

The 16-year-long legal battle over commercial planes between the U.S. and the European Union didn’t make much sense to begin with. It is even more absurd amid the rise of China as an aerospace power and 2020’s bailout of the entire aviation industry.

The World Trade Organization has now authorized governments on both sides of the Atlantic to impose retaliatory tariffs. A year ago, it allowed the U.S. to slap $7.5 billion a year in tariffs on European imports because plane maker Airbus received illegal financing to launch new jets. This past week, it granted the EU the right to levy its own tariffs, worth $4 billion, in response to unlawful aid received by Boeing. BA -0.34%

Both sides are now locked in a staring contest. U.S. Trade Rep. Robert Lighthizer argued that the EU has no legal basis to act, because the Washington state tax breaks given to Boeing used to calculate the $4 billion figure were repealed earlier this year. The EU has signaled that it is willing to go ahead anyway. The U.S. has threatened to retaliate.

If the legal dispute is reopened, the Covid-19 crisis poses new pitfalls. Airbus has been bailed out, and so have the clients of both plane makers—the airlines. The EU would also likely revive issues excluded from the latest WTO decision, such as research money given to Boeing by NASA and the Department of Defense. The political climate surrounding the Nov. 3 election is an added complication.

Yet negotiations are ongoing and there is much to suggest that, whatever the election outcome, the stars are finally aligning for an accord.

For one, the grounding of the 737 MAX jet has left Boeing in a weaker position than in 2004, when it had a strong incentive to keep its competitor away from juicy U.S. defense contracts. Now, it has a lot to lose from tariffs, even if most are likely to be applied to nonaviation products. Plus, Airbus has de-escalated by agreeing to set debt payments granted by France and Spain linked to its A350 plane in line with market rates. 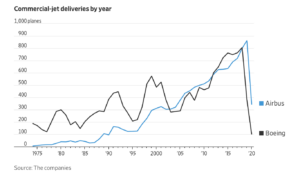 Above all, U.S. and European negotiators are increasingly aware of the need to untie their hands to face the threat of China’s state-owned Comac. Major Chinese airlines are also owned by the government, ensuring orders for its new C919 jet—the development of which has probably contravened WTO rules.

The core of the issue is that the aerospace industry doesn’t lend itself to textbook free markets. Manufacturers benefit from government military spending as well as enormous economies of scale that require large upfront investments and impede entrants. Like other technology-rich companies, they mostly compete by inventing better products, not by lowering prices. The rise of Airbus, which would have been unlikely without product-specific subsidies, has created a more competitive market.

The Boeing-Airbus spat has led the WTO to spend years establishing that government money did indeed serve to create cheaper, safer and more efficient planes that made consumers better off, with the perverse purpose of penalizing this outcome.

Since China won’t give up its ambition to emulate Airbus, both Western firms would benefit from a cessation of mutual hostilities. They should be aiming to shape new plurilateral rules that are more lenient toward the development aid endemic to the industry, while still policing China’s anticompetitive procurement practices.

The alternative could be many more years of fruitless legal battles.

Jon Sindreu writes about financial markets and the global transportation industry for Heard on the Street in London.