Blogs > Who Will Lead the WTO and Help It Avoid Collapse?

Who Will Lead the WTO and Help It Avoid Collapse?

The campaign to lead the World Trade Organization during the most turbulent period of its 25-year existence has officially begun. Playing out against the backdrop of a pandemic, a worldwide recession, the U.S.-China battle for trade supremacy and the American presidential election, there couldn’t be more at stake. But Brazilian Director-General Roberto Azevedo’s decision to step down at the end of August, a year before his term ends, also offers an opportunity for the U.S., the European Union and other nations to reshape the organization.

The Geneva-based WTO’s mission of economic integration is under threat from protectionist policies around the globe, and without reform it risks being sidelined during the biggest economic crisis in a century. The world’s largest economies agree that the organization must evolve to address the shifts in technology and the global trading system that have occurred since 1995. If members can align behind a candidate committed to modernization, it could break bureaucratic logjams and help unleash a wave of global growth at a time when it is needed most. If no such candidate can be found, the WTO risks further receding into irrelevance.

The WTO’s appellate body, the main forum for settling worldwide trade disagreements, lost its ability in December 2019 to rule on new dispute cases. That resulted from a U.S. refusal over the previous two years to consider any nominees to fill vacancies on the panel. WTO members can still bring disputes to the trade body and receive an initial ruling, but that can be appealed into legal limbo. The U.S. imposition of hundreds of billions of dollars worth of tariffs against China, and use of the WTO’s national security loophole to levy duties on steel and aluminum, have also weakened the organization.

3. What is the WTO’s selection process?

The chairman of the WTO General Council launched a selection procedure in June to confirm the trade body’s next director-general. WTO members had sought to truncate the six-month process into just three in order to avoid a leadership vacuum in September, but it’s likely a new candidate won’t be selected until after the U.S. presidential election in November. During this time, the candidates will present themselves to the WTO’s membership, campaign for support and sit for a question-and-answer session with the WTO General Council. Then the WTO’s three highest-ranking delegates, known as “the troika,” will consult with the membership and try to build a consensus around a final candidate.

5. What credentials are required?

WTO rules require candidates to have “extensive experience in international relations, encompassing economic, trade and/or political experience; a firm commitment to the work and objectives of the WTO; proven leadership and managerial ability; and demonstrated communications skills.”

6. What kind of leader are nations looking for?

Governments hope the next WTO director-general can persuade members to complete the much-needed reform of the organization. Trade officials in Geneva broadly argue that Azevedo’s successor should have sufficient leadership authority and capability to marshal broad support around the WTO’s reform agenda. That means strong consideration should be given to candidates who have, at the very least, some experience as a minister.

7. Is there a nationality requirement?

No. However, trade officials from the U.S., EU and Canada say the next WTO director-general should come from a developed country due to their belief that the organization’s leadership should rotate between developed and developing countries. Not all delegates agree on this, however, and representatives from African nations argue that it’s their continent’s turn to take on the top mantle of the WTO. 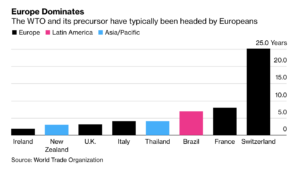 8. Should a woman lead the WTO?

There is a strong push among Geneva trade delegates to select a woman to lead the WTO for the first time. However, free-trade advocates like Wendy Cutler, vice president of the Washington-based Asia Society Policy Institute, argue that WTO members should try to avoid placing gender constraints on the selection process.

9. Are there any other considerations?

The candidate must also thread a narrow diplomatic needle that displeases neither the U.S. nor China, whose bitter conflict over the pandemic is testing their fragile economic truce. The Trump administration has actively sought to undermine the WTO’s ability to function, saying it has infringed on American sovereignty and enabled China to become a big economic player globally at the expense of U.S. jobs and manufacturing. Adding to the unpredictability factor, President Donald Trump — who has called the WTO the worst trade deal the U.S. has ever signed — is up for re-election in November, so America’s tolerance for a candidate who looks too favorably on China might be tested. Meanwhile, China has engaged in a multi-year campaign to expand its diplomatic influence by installing key personnel at the top levels of international decision making bodies.

10. What happens if no candidate is selected?

One of the WTO’s four deputy directors-general may serve as an interim caretaker if the WTO’s members cannot agree on a consensus nominee by Sept. 1. They are Yonov Frederick Agah of Nigeria, Karl Brauner of Germany, Alan Wolff of the U.S. and Yi Xiaozhun of China.