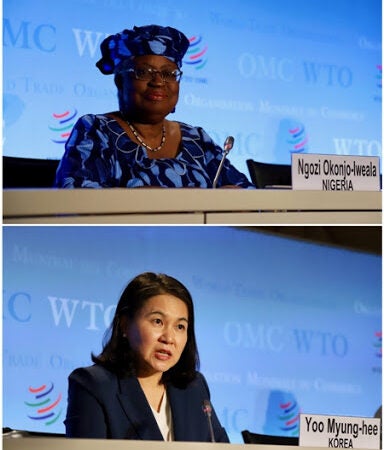 The troika of WTO Chairs (of the General Council, Dispute Settlement Body and Trade Policy Review Body) met with the WTO heads of delegation on October 28 to review the results of the third round of consultations with Members as part of the long process of selecting the next Director-General. The meeting which was scheduled for 3 p.m. Geneva time, started after 3:15 p.m. and resulted in at least temporary challenges.

The two remaining candidates for consideration during the third round were Korea’s Minister for Trade, H.E. Yoo Myung-hee and Nigeria’s Dr. Ngozi Okonjo-Iweala. Both are considered highly qualified though with very different backgrounds — trade for Minister Yoo; development economics and finance for Dr. Okonjo-Iweala. Both candidates received strong support from their host governments in terms of politic outreach.

Amb. David Walker, the Chair of the General Council, announced that Dr. Okonjo-Iweala has emerged from the third round as the candidate most likely to attract consensus among the Members, and it is understood that she received broad support. Press articles have indicated support from WTO Members of the African Union, support from the countries part of the European Union and other support in the Americas and Asia, including China and Japan. Thus, Dr. Okonjo-Iweala may have been the preferred candidate for more than 100 of the 164 WTO Members.

Minister Yoo reportedly had the support of the United States, many countries in Asia and other support from the Americas and elsewhere.

The actual support of each candidate is not released by the WTO as consultations are confidential, though individual governments are, of course, free to identify which candidate they preferred.

Importantly, the Republic of Korea did not withdraw Minister Yoo’s candidacy and the U.S. has indicated it continues to support Minister Yoo, which means that at least for the moment there is not a consensus for Dr. Okonjo-Iweala.

“At the end of the final stage of the consultative process, the Chair, with the support of the facilitators, shall submit the name of the candidate most likely to attract consensus and recommend his or her appointment by the General Council.”

Recourse to voting as a last resort

If, after having carried out all the procedures set out above, it has not been possible for the General Council to take a decision by consensus by the deadline provided for the appointment, Members should consider the possibility of recourse to a vote as a last resort by a procedure to be determined at that time. Recourse to a vote for the appointment of a Director-General shall be understood to be an exceptional departure from the customary practice of decision-making by consensus, and shall not establish any precedent for such recourse in respect of any future decisions in the WTO.”

The deadline for the appointment under existing procedures, is November 7, 2020. Id, para. 15. It is unclear what the objection is for the United States to Dr. Okonjo-Iweala, although press accounts have indicated that the U.S. has concerns about Dr. Okonjo-Iweala based on her work with U.S. officials with significantly different views on trade policy than the current U.S. Administration. It is also not clear why Korea’s candidate would not follow the agreed procedures for appointment of Directors-General and withdraw in light of the preferences expressed to the troika during the third round.

The WTO has been fortunate to have very strong candidates put forward to be considered as the next Director-General. Minister Yoo is highly qualified and had a strong presentation of views and intended approach for leading the WTO forward.

Dr. Okonjo-Iweala with her service as Minister of Finance twice for Nigeria and twenty-five years experience at the World Bank, background in development economics, and service as Chair of GAVI brings a wealth of experience at high levels of government and multilateral organizations. She is also a candidate from Africa, a continent that has not to date had a Director-General of the WTO. As stated in the General Council’s procedures for appointing Directors-General,

In order to ensure that the best possible candidate is selected to head the WTO at any given time, candidatures representing the diversity of Members across all regions shall be invited in the nominations process. Where Members are faced in the final selection with equally meritorious candidates, they shall take into consideration as one of the factors the desirability of reflecting the diversity of the WTO’s membership in successive appointments to the post of Director-General.”

There has been a prior WTO Director-General from Asia, which may have been a consideration for some WTO Members in providing their preference for Dr. Okonjo-Iweala instead of Minister Yoo in the third round.

It is obviously unfortunate that a process that has worked smoothly so far in 2020, has developed the current set of challenges from Korea and the U.S. Hopefully, the challenges will be addressed and a consensus reached in the next nine days. The correct outcome at this point is for Dr. Okonjo-Iweala to be the next Director-General, the first female Director-General and the first African Director-General.

If the unexpected holdup in concluding the selection process can be resolved, Dr. Ngozi Okonjo-Iweala will hopefully be up to the daunting task that awaits the next Director-General. Success will depend on the willingness of Members to find common ground and address the need for reform and updating the rule book — clearly a herculean challenge considering the very different views of major Members and different groups of Members. But the WTO needs a leader who can help Members find the path forward, be an honest broker, help Members restore confidence in the organization and ensure trade issues can be effectively addressed within the organization, help ensure engagement by all, and be able to engage with governments at a political level and with other multilateral organizations to achieve meaningful participation by all. The global trading system needs a strong and relevant WTO. Time will tell if Dr. Okonjo-Iweala will be that leader. Let’s hope that the next Director-General will succeed.