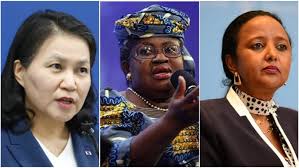 As the World Trade Organization starts the second round of consultations with Members today to continue to winnow down the list of candidates to move forward to the third round in mid-October, the likelihood of block preferences by countries within the EU and from Africa would seem to guarantee that the two candidates remaining at the end of the second round of consultations are two of the three women candidates — Dr. Ngozi Okonjo-Iweala of Nigeria, H.E. Yoo Myung-hee of the Republic of Korea and H.E. Amina C. Mohamed of Kenya.

Second, press articles in recent days have indicated that the 27 European Union countries had given their preferences for the same candidates in round one of the consultations and that had led to three of the four candidates they supported advancing — the three women candidates from Nigeria, Kenya and the Republic of Korea. They had not expressed preferences for either of the two male candidates who advanced, H.E. Mohammad Moziad Al-Tuwaijri of Saudi Arabia and the Rt Hon Dr. Liam Fox MP of the United Kingdom. While WTO Members are obviously not limited to prefer in later rounds individuals they expressed preferences for in earlier rounds, it is expected that the EU countries (with limited exceptions) will agree on two of the three women candidates for Round 2. This would be consistent with their apparent desire to see a candidate from a different geographical area than recent DGs and for a candiate who is female supporting gender equality objectives of the UN Sustainable Development Goals. There is one known likely exception to the EU expressing preferences as a block approach. Specifically, the press has indicated that Hungary intends to identify its preferences as H.E. Mohamed of Kenya and Dr. Fox of the United Kingdom.

While H.E. Al-Tuwaijri and Dr. Fox will certainly receive support in round two of the consultations from a significant number of Members, if the EU and Africa vote largely in blocks, it is hard to imagine how either of them advances to the final round of consultations.

My assumption is that the third round will be a face off between H.E. Mohamed and Dr. Okonjo-Iweala. We will know in early October.