With the Biden Administration not having its trade team in place, there was no realistic possibility that the United States at yesterday’s Dispute Settlement Body (DSB) meeting would modify its position on the WTO Appellate Body and its unwillingness to have new members of the Appellate Body appointed prior to the resolution of its longstanding concerns. Thus, it was not surprising that the U.S. again held firm. The issue was the last specified item on the agenda for the meeting as can be seen from the airgram embedded below. 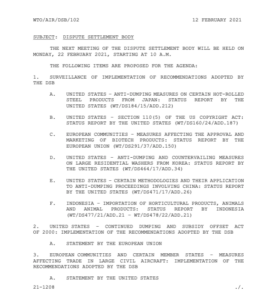 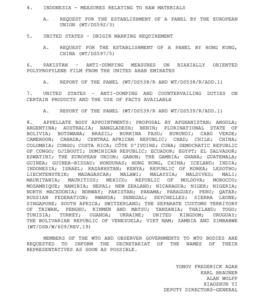 The U.S. intervention on item 8 of the agenda was brief and to the point and is copied below. See Statements by the United States at the Meeting of the WTO Dispute Settlement Body, Geneva, February 22, 2021, https://geneva.usmission.gov/wp-content/uploads/sites/290/Feb22.DSB_.Stmt_.as_.deliv_.fin_.public.pdf.

“• The United States is not in a position to support the proposed decision.

“• We look forward to further discussions with Members on those concerns.”

The incoming Director-General Ngozi Okonjo-Iweala has identified addressing the problems surrounding the Appellate Body and the Dispute Settlement System as a high priority when she starts her term on March 1 and is hopeful of having a work program for moving forward by the 12th Ministerial likely to be held at the end of 2021. See February 16, 2021, Special Session of the General Council at WTO appoints Dr. Ngozi Okonjo-Iweala as the seventh Director-General, https://currentthoughtsontrade.com/2021/02/16/special-session-of-the-general-council-at-wto-appoints-dr-ngozi-okonjo-iweala-as-the-seventh-director-general/ (quotes certain portions of Dr. Ngozi’s statement including para. 1.12, “1.12. Reform of the dispute settlement system, which has been a central element in guaranteeing security and predictability of the multilateral trading system, is of utmost importance to the membership. Some Members have criticised the way it functions and demanded reforms. It will be important to agree on the nature of these reforms, flesh them out, and develop a work programme for implementation that can be advanced at MC12. I believe that the set of recommendations proposed by Ambassador Walker could provide Members with a platform upon which to build so as to restore confidence in the dispute settlement system. A strengthened and robust system is in the interest of all Members, and as such, every effort should be made to improve it. We need a system that can garner the confidence of all, including small developing and least developed countries who have found it challenging to utilize.”).

Thus, absent a significant shift in position by the Biden Administration, it is likely that the impasse will continue through 2021. What is likely is that the Biden Administration will start once the trade team is in place to flesh out changes needed to the dispute settlement system to permit reform and the restart of the Appellate Body. In prior posts I have suggested some possible approaches to moving reform forward to address underlying U.S. concerns. See, e.g., July 12, 2020, WTO Appellate Body reform – revisiting thoughts on how to address U.S. concerns, https://currentthoughtsontrade.com/2020/07/12/wtos-appellate-body-reform-revisiting-thoughts-on-how-to-address-u-s-concerns/. The EU has indicated some willingness to address U.S. concerns about an Appellate Body not adhering to the limited role envisioned in the DSU. A major open question will be rebalancing rights and obligations through the correction of prior Appellate Body reports that impermissibly created rights and obligations never agreed to by Members.

While the impasse continues, WTO Members are either seeking alternative approaches to resolve disputes after a panel report (e.g., 25 Members are participating in a multiparty appellate arbitration process, others are agreeing not to appeal panel reports, others are resolving differences through consultations) or are taking appeals which essentially puts the matter on hold pending resolution of the impasse. On February 22nd, Pakistan became the latest to appeal a panel report where there is no functioning Appellate Body. SeePakistan – Anti-Dumping Measures on Biaxially Oriented Polypropylene Film from the United Arab Emirates, WT/DS538/5. The EU raised the Pakistan appeal in its comments at the DSB meeting. See EU Statements at the Regular Dispute Settlement Body(DSB), 22 February 2021, https://eeas.europa.eu/delegations/world-trade-organization-wto/93629/eu-statements-regular-dispute-settlement-body-dsb-22-february-2021_en.

“AGENDA POINT: ANY OTHER BUSINESS

“Pakistan – Anti-Dumping Measures on Biaxially Oriented Polypropylene Film from the United Arab Emirates (DS538) This is yet another dispute that illustrates the grave consequences of the blockage of Appellate Body appointments since 2017. That blockage frustrates the essential rights of WTO Members that were agreed multilaterally in the DSU.

“We refer to EU’s intervention under item 7 of the DSB meeting on 28 September 2020, where we elaborated on these consequences and on the possibility of appeals being adjudicated upon through appeal arbitration based on Article 25 of the DSU, consistently with the principles of the DSU. We will not repeat these points today.”

With Pakistan’s appeal yesterday, there are now 18 panel reports that have been appealed but where the appeal is not proceeding due to the impasse on the Appellate Body. So the concerns by many Members about needing a resolution will continue to increase. See WTO Appellate Body, https://www.wto.org/english/tratop_e/dispu_e/appellate_body_e.htm; February 17, 2021, The amended European Union enforcement regulation — hypocrisy or a reasonable move?, https://currentthoughtsontrade.com/2021/02/17/the-amended-european-unions-enforcement-regulation-hypocrisy-or-a-reasonable-move/(lists the 17 cases before the Pakistan appeal).

With USTR nominee Katherine Tai having her confirmation hearing by the Senate Finance Committee on Feburary 25, it is likely that the U.S. Trade Representative will be in place by March 1. No Deputy USTR’s have been nominated as yet. So the U.S. is still some time from having its full team in place. Thus, I wouldn’t expect movement by the U.S. for a few more months at a minimum.

Two requests for panels agreed to during the DSB meeting .

There was agreement at yesterday’s DSB meeting for the formation of two panels to hear disputes brought by Hong Kong against the U.S. and by the European Union against Indonesia. See items 4 and 5 on the DSB agenda.

The following comments are limited to the Hong Kong case as it raises national security defense issues by the U.S.

In prior posts, I had reviewed Hong Kong’s concerns with the United States action requiring goods from Hong Kong to be marked as made in China following the crackdown by China on Hong Kong. See January 16, 2020, Request for the establishment of a WTO panel by Hong Kong, China contesting the U.S. origin marking requirement, https://currentthoughtsontrade.com/2021/01/16/request-for-the-establishment-of-a-wto-panel-by-hong-kong-china-contesting-the-u-s-origin-marking-requirement/; November 3, 2020, Hong Kong requests consultations with the United States on the change in origin marking requirements for goods from Hong Kong, https://currentthoughtsontrade.com/2020/11/03/hong-kong-requests-consultations-with-the-united-states-on-the-change-in-origin-marking-requirements-for-goods-from-hong-kong/.

As expected, the U.S. defense is based on U.S. national security concerns and that is how it was described by the U.S. at yesterday’s DSB meeting.

“A. REQUEST FOR THE ESTABLISHMENT OF A PANEL BY HONG KONG, CHINA (WT/DS597/5)

“• The United States regrets that Hong Kong, China, has chosen to move forward with a request for panel establishment.

“• The clear and unequivocal U.S. position, for over 70 years, is that issues of national security are not matters appropriate for adjudication in the WTO dispute settlement system. We therefore do not understand the purpose of this request for panel establishment, seeking WTO findings that the United States has breached certain WTO provisions. The WTO cannot, consistent with Article XXI of the General Agreement on Tariffs and Trade 1994, consider those claims or make the requested findings.

“• No WTO Member can be surprised by this view. For decades, the United States has consistently held the position that actions taken pursuant to Article XXI are not subject to review in GATT or WTO dispute settlement. Each sovereign has the power to decide, for itself, what actions are essential to its security, as is reflected in the text of GATT 1994 Article XXI.1

“• Infringing on a Member’s right to determine, for itself, what is in its own essential security interests would run exactly contrary to the efforts to revitalize and reform the WTO that are necessary to ensure that it lives up to its potential.

“1 GATT 1994 Article XXI(b) (“Nothing in this Agreement shall be construed … (b) to prevent any contracting party from taking any action which it considers necessary for the protection of its essential security interests … (italics added).”

The U.S. position of matters not being subject to dispute settlement where one party claims national security has not been accepted in several earlier panel reports although national security exceptions have been found where certain conditions are met. The U.S. is involved in some major disputes on the use of Section 232 of the Trade Expansion Act of 1962, as amended, on steel and aluminum where panel reports are presently expected in the second half of 2021. The Hong Kong case presents a different factual situation and will have different analysis if the U.S. position is not accepted by the panel. As has been true for most disputes in recent years, the dispute is unlikely to get to a panel report for several years — i.e., 2023 at the earliest.

The work of the WTO in general and the Dispute Settlement Body in particular do not pause because of elections or changes of administrations in one or more major Members. Nevertheless, with the heart of the challenges to the functioning of the Dispute Settlement System involving U.S. long-term concerns with the Appellate Body, practically there will be no movement until the new Biden Administration has time to get its team in place and review its priorities and game plan for WTO reform. Whatever else happens at the WTO, one should not expect movement by the U.S. on reform to the dispute settlement system before summer at the earliest.