The WTO membership faces many challenges, ranging from substantive rulemaking on policies generating trade conflicts to revitalising the multilateral dispute settlement system. This column reports on the results of a recent survey of the trade community regarding the priorities confronting the next WTO Director-General. There is a substantial degree of commonality in rank orderings of substantive issues for negotiation, institutional reform, and daily operations of the WTO, but underlying this are significant differences in rankings of issues and options across groups of respondents. Resolving the dispute settlement crisis is a clear priority for most respondents, especially government officials.

On 14 May 2020, Roberto Azevedo, the Director-General of the WTO, announced he would step down from his position at the end of August. In a previous column, we reported on findings from a recent survey relating to the attributes of candidates for the position that WTO members and the international trade community consider the most important. In this column, we turn to priorities for the next DG.

The survey ran between 5 June and 21 June 2020 on an online survey platform. The questionnaire was sent by email to all WTO delegations and distributed through e-mail and social media channels to trade practitioners using a contact list developed by the Global Economics programme of the EUI’s Robert Schuman Centre for Advanced Studies. Recipients were requested to forward the survey to others in their networks working on trade and WTO matters. The sampling frame is not designed to ensure that respondents will be perfectly representative of the WTO stakeholder community, and no claim to this effect is made.

A total of 1,092 people opened the survey, and 75% (819) responded to at least one question. Around 800 responses were received for most of the questions (the lowest number of respondents for a question is 733; the highest is 807). Government officials (including the EU) represent the second largest category of respondents (24.6%) after academia (25.1%). The private sector (companies and business associations) account for 19% of all respondents, followed by staff of international organisations (18%) and NGOs, labour unions and think tanks (11%). Of the government and EU respondents, 31% (66) are based in Geneva.

Near-term priorities for the WTO (and the next DG)

Everything is a priority – except launching discussions on new issues

A first question concerned the priority accorded to ‘immediate’ challenges should feature on the agenda of the 12th WTO Ministerial meeting (MC12) in 2021. These span monitoring COVID-19 pandemic trade-related measures; concluding ongoing negotiations on different subjects, both multilateral and plurilateral; launching discussions on new issues; clarifying the role of the trade policy in tackling climate change; negotiating stronger rules on the use of subsidies and industrial policies; and the WTO’s role in realising the UN Sustainable Development Goals (SDGs).

Respondents regard all these issues as priorities for the institution. The exception is launching discussions on new issues, which received fewer scores of high or very high and, as important, a greater share of low or very low scores (Figure 1, panel a).  Despite the commonality of view that most of the identified issues are priorities, a heatmap of Spearman rho correlations (Figure 1, panel b) reveals differences in rankings across topics. Geneva officials rank concluding the long-running multilateral negotiations on fishing subsidies and agricultural support as the most important priority, with some 90% of respondents giving this a high or very high score. In contrast, officials in capitals accord a higher rank to concluding ongoing plurilateral talks on e-commerce, domestic regulation of services, investment facilitation and MSMEs, which is seen as less important by Geneva-based officials. Both groups of officials place great weight on monitoring of COVID-19-related policy measures.

NGOs prioritise clarifying how the WTO can contribute to attaining the SDGs and the role of trade policy in combatting climate change, with 90% of respondents giving the WTO-SDG issue a score of high or very high. This group is also more opposed to concluding plurilateral talks, with 25% giving this a low or very low score. 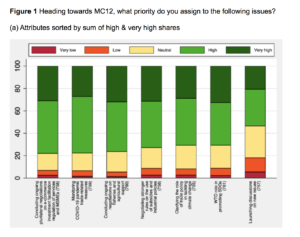 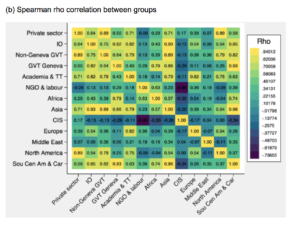 Ordered probit analyses reported in Fiorini et al. (2020) reveal additional differences in rankings of issues across groups. The private sector and government officials in capitals are aligned on the relative importance accorded to concluding plurilateral talks, revealed in a statistically significant higher ranking for this issue. Capital-based officials rank negotiating stronger rules on subsidies more highly than the total sample. This is also the case for engaging on the SDGs, an issue that African respondents and NGOs similarly rank higher than the total sample. Business is an outlier in according a higher ranking to launching of discussion on new issues. Finally, Geneva delegations accord a statistically significant lower ranking to clarifying the role of trade policy in addressing climate change.

Many WTO members have been engaged in a process to identify measures that could be taken to improve the functioning of the organisation (e.g. Wolff 2020). The survey asked respondents to rank the priority accorded to resolving specific problems affecting the operation of the WTO and specific suggestions that have been made to address them. Specifically, respondents were asked about the priority they accorded to the following issues/options:2

Addressing the dispute settlement crisis is the highest priority issue, with over 80% of respondents giving options a) and b) – making the AB operational and reforming dispute settlement – a score of high or very high.2 Moreover, these options attracted virtually no scores of low or very low. Other issues attracting scores of high or very high include improving compliance with notification obligations; resolving differences on special and differential treatment for developing countries; and strengthening the trade policy monitoring process (Figure 2, panel a).

The two options ranked lowest were deepening engagement with stakeholders and analysing the cross-country distributional effects of national trade policies. This suggests many of the trade practitioners that responded to the survey do not see a strong need to consider the impacts of trade policy or to elicit input from the broader stakeholder community. Given rising contestation of trade agreements and the emergence of populist political opposition to the WTO, one might have expected these options to be accorded more importance.

There are some noteworthy differences in rankings across groups. Geneva delegations, NGOs and African respondents tend to place different weights on some of the issues and options raised. African respondents place a higher priority on all these issues compared to the whole sample. They also accord a higher ranking to trade policy monitoring and to resolving differences on special and differential treatment for developing countries (Fiorini 2020).

One difference that emerges concerns dispute settlement. Non-Geneva-based government officials are similar to the sample as a whole in ranking reform of dispute settlement highest, followed by making the AB operational again, suggesting that what is being picked up here is simply that resolving the conflict on dispute settlement is what matters most to governments. Noteworthy in this regard is that Geneva-based officials rank reinstating the AB as most important, with 95% of this group giving this a score of high or very high, but rank reform of the dispute settlement system much lower (seventh out of the nine issues/options raised in the relevant question) (Figure 2, panel b). This suggests that as far as Geneva is concerned the first order of business is to bring the AB back. Whether and what to consider in terms of improving dispute settlement is seen as less of a priority by Geneva delegations. ‘Geneva’ ranks action to diffuse potential disputes though deliberations in WTO committees through mechanisms such as tabling ‘specific trade concerns’ more highly than engaging in dispute settlement reform discussion. 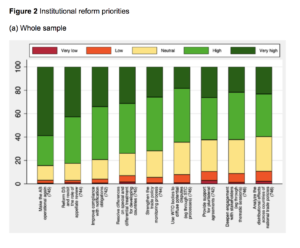 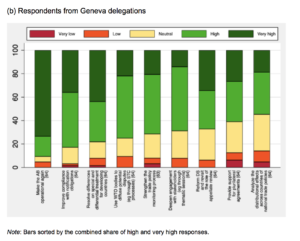 Ordered probit analysis reveals that government officials, whether in or outside Geneva attach a statistically greater priority (ranking) to making the AB operational again than do respondents overall. The probit regressions confirm that Geneva, as well as NGOs and European respondents, assign a lower ranking to dispute settlement reform, whereas Latin American and African respondents rank this higher.

A final set of questions concerned daily operations of the organization, with a focus on two issues: the use of video-conferencing technologies and the use of voting on matters that do not imply a change in rights and obligations of WTO members. The results suggest agreement on greater use of video conferencing, including for the delivery of training and technical assistance; making decisions through meetings that involve participation of officials via video conferencing facilities; and making use of such technology a standard option for WTO meetings. Geneva officials are less supportive of decision-making when videoconferencing is used, while business respondents are significantly more favourable to use of video conferencing than the total sample (Fiorini et al. 2020).

2 This issue has been the subject of several VoxEU columns (e.g. Zedillo 2019, Hoekman and Mavroidis 2019).