While import-restrictive measures introduced by Group of 20 (G20) economies continue to cover a growing share of trade, the WTO’s latest biannual monitoring report on trade measures — the first to cover a time period coinciding with the coronavirus pandemic — points to significant moves to facilitate imports, including products related to COVID-19. During the mid-October 2019 to mid-May 2020 review period, G20 economies implemented 154 new trade and trade-related measures, 95 of them import-facilitating and 59 import-restrictive. Of these measures, 93 (about 60 percent) were linked to the COVID-19 pandemic.


New import-restrictive measures unrelated to the pandemic covered an estimated USD 417.5 billion worth of merchandise trade, the third-highest figure recorded since May 2012. Tariff increases, import bans, stricter customs procedures, export duties and other such measures introduced during the review period affected 2.8 per cent of G20 trade. Meanwhile, the stock of import-restrictive measures implemented since 2009 and still in force continues to grow – now affecting an estimated 10.3 per cent of G20 imports (USD 1.6 trillion).

However, the WTO report also finds evidence of steps towards more open trade policies across sectors, including goods, services and intellectual property.

New import-facilitating measures, such as tariff reductions, the elimination of import taxes and the reduction of export duties, covered an estimated USD 735.9 billion worth of trade, excluding policies relating to the pandemic. This figure is the highest recorded since 2014, and is sharply higher than the USD 92.6 billion trade coverage of import-facilitating measures recorded during the previous monitoring period from May to October 2019.

The initial COVID-19 outbreak saw many governments introduce trade restrictions, over 90 per cent of them export bans on medical products, such as surgical masks, gloves, medicine and disinfectant. Since then, G20 economies have repealed 36 per cent of these restrictions. They have also lowered barriers to imports of many pandemic-related products. As of mid-May 2020, 65 of the 93 pandemic-related trade measures implemented during the monitoring period – or about 70 per cent – were of a trade-facilitating nature. The remaining 28 measures, 30 per cent of the total, could be considered to have trade-restrictive effects.

“Historically high levels of trade-restrictive measures remain a source of concern, all the more so at a time when international trade and investment will be critical to rebuild economies, businesses and livelihoods around the world. That said, we also see some encouraging indications: not since 2014 have import-facilitating measures implemented during a single monitoring period covered more trade.

“There are signs that trade-restrictive measures adopted in the early stages of the pandemic are starting to be rolled back. There is no room for complacency: building on these positive indicators will demand consistent efforts and leadership, starting with the G20. Exceptional circumstances require exceptional responses, and this is the time for G20 governments to work together to facilitate a rapid and inclusive economic recovery.”

The report – the 23rd in a series dating back to the global financial crisis in 2009 – was the first to be prepared against the backdrop of the COVID-19 pandemic. The full impact of the viral outbreak and associated lockdown measures is not yet reflected in trade statistics, but according to WTO data published on 22 June, world trade fell sharply in the first half of the year.

In addition to details about trade measures put in place during the review period, the report, in line with its mandate, provides details on general economic support measures put in place by governments. The new report also describes the unprecedented number and extent of emergency support measures introduced in response to the economic and social disruption caused by the COVID-19 pandemic.

Most of the 468 COVID-19-related economic support measures identified appeared to be of a temporary nature and included a broad range of support programmes, loans, credit guarantees and stimulus packages. Several measures were one-off grants, others included disbursements staggered over a period of a few months to up to three years. Some of these measures form part of emergency rescue programmes collectively worth in excess of several trillion US dollars.

The WTO trade monitoring reports have been prepared by the WTO Secretariat since 2009. G20 members are: Argentina; Australia; Brazil; Canada; China; the European Union; France; Germany; India; Indonesia; Italy; Japan; the Republic of Korea; Mexico; the Russian Federation; the Kingdom of Saudi Arabia; South Africa; Turkey; the United Kingdom; and the United States.

G20 trade-facilitating and trade-restrictive measures, mid-October 2019 to mid-May 2020
(By number) 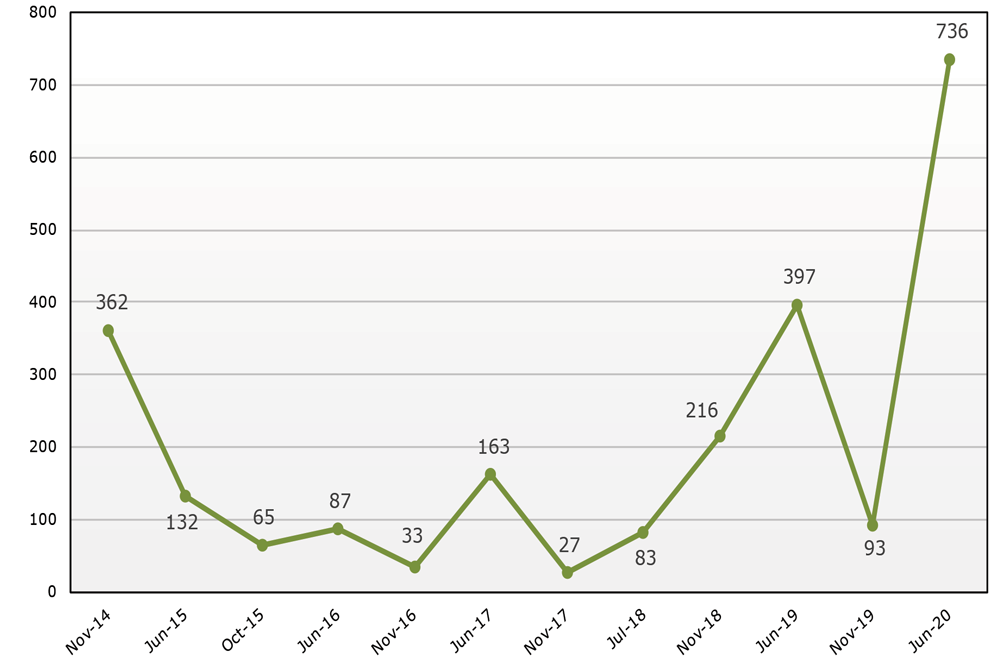 Note:       These figures are estimates and represent the trade coverage of the measures (i.e. annual imports of the products concerned from economies affected by the measures) and not the cumulative impact of the trade measures. Liberalization associated with the 2015 Expansion of the WTO’s Information Technology Agreement is not included in the figures. COVID-19 trade and trade-related measures are not included.
Source:   WTO Secretariat. 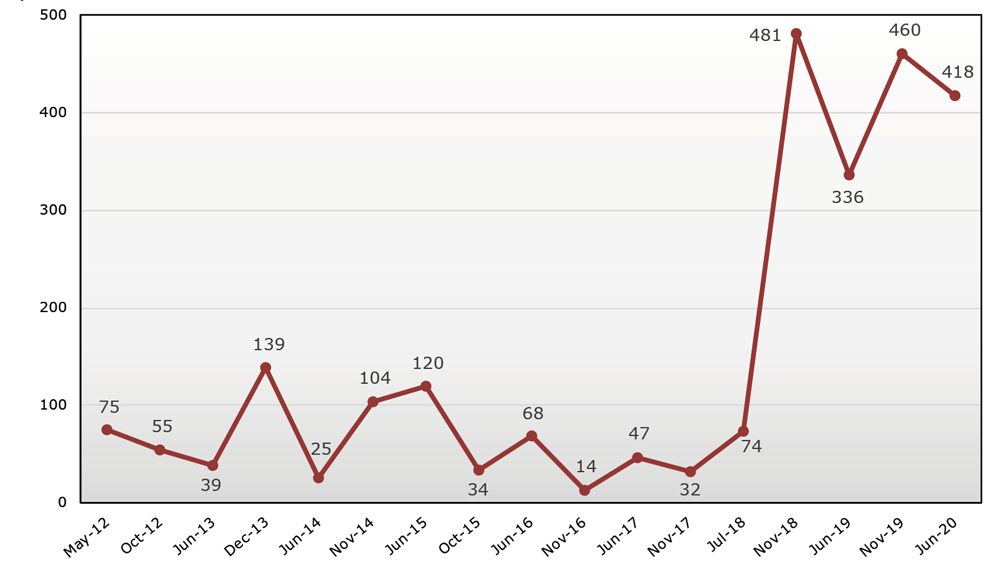 Note:       These figures are estimates and represent the trade coverage of the measures (i.e. annual imports of the products concerned from economies affected by the measures) introduced during each reporting period, and not the cumulative impact of the trade measures. COVID-19 trade and trade-related measures are not included.
Source:   WTO Secretariat. 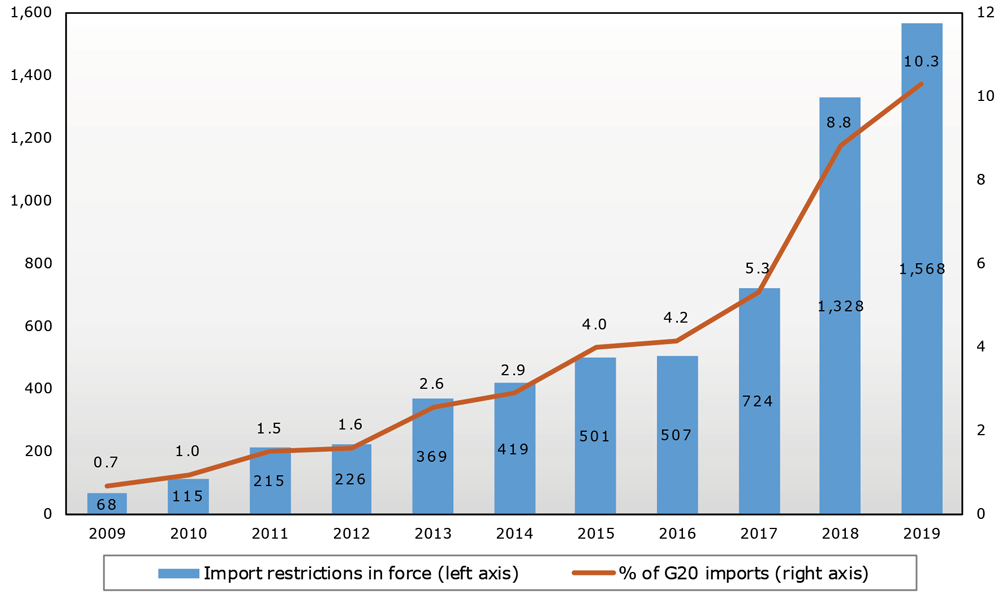 To read the original report at the World Trade Organization, please click here